A visual treat in the dragon’s den

Spring, when our view into deep space is at right angles to the plane of the Milky Way and away from its obscuring gas and dust, is traditionally galaxy-hunting time. Virgo and Coma Berenices lie at a good altitude in the south and even a modest aperture telescope will show some of the rich galaxy pickings to be had there.

One superb example, and one that Charles Messier and his 18th century comet-hunting colleagues missed, is NGC 4565: an edge-on galaxy in Coma commonly known as the Needle Galaxy. It was discovered by William Herschel in 1785. This galaxy was discussed in Observers’ Forum in the 2012 April Journal [122(2)] and an image of it by Paul Downing, using his 12.5-inch PlaneWave and QSI 683 camera, is shown here as a reminder of just what a glorious object it is.

But Coma and Virgo do not hold all the galaxy gems. Another edge-on spiral galaxy well displayed at this time of year is NGC 5907 in Draco, the celestial dragon. Perhaps not quite as splendid as NGC 4565, it is still a favourite amongst many galaxy hunters and it is interesting to compare with its slightly bigger brother in Coma.

Draco is an ancient constellation; one legend has it that it is the dragon slain by Hercules, who now rests one of his feet on its head. Like Hercules it contains no particularly bright stars, with nothing brighter than magnitude +2 and the majority around +3. This means that from some urban locations its long, straggly shape may be almost invisible as it winds its way towards the north celestial pole.

From an historical perspective, one star of particular interest is magnitude +3.6 alpha Draconis (Thurban) located in the dragon’s tail. This was the pole star around 2700 BCE, but precession has shifted it well away from the pole to be replaced, for the time being, by the current pole star alpha Ursae Minoris (Polaris). 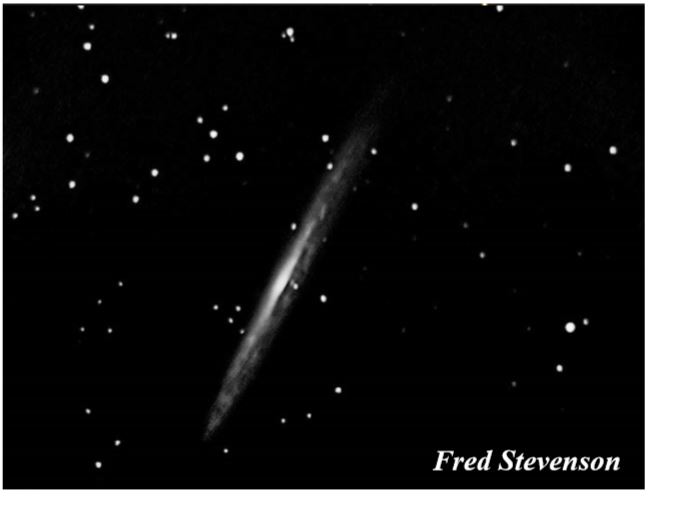 With a high northerly declination the constellation is circumpolar from the UK, but spring – when it lies almost overhead – is the best time to hunt down its treasures. Edge-on galaxy NGC 5907, often called the Splinter Galaxy, lies at RA 15h 15.9m and Dec. +56° 19′, which puts it just under three degrees SSW of magnitude +3.3 iota Draconis (Edasich) in the direction of magnitude +3.5 beta Boötis.

Lying at a distance of 40 million light-years, it was discovered by William Herschel in 1788, who described it as being ‘pretty bright, faint near the middle and 8′ to 10′ long’. With a visual magnitude of +10.3 and a catalogued size of 11.5×1.7′, it is a superb sight in any telescope, but particularly in a large aperture of 50cm or so, for which the elongated halo lying NNW–SSE along with its elongated core are particularly stunning. Observing the galaxy with Owen Brazell using a 24.5-inch (65cm) telescope in Tenerife during 2012, under a good sky and at an altitude of 2000m, the view rivalled that seen in many images.

Some images of NGC 5907 sent to the BAA Deep Sky Section by members over the last few years are shown here. Andrea Tasselli’s image was taken with his Intes Micro M809 Mak.–Cass. and SXV-H9 camera. It was an LRGB image (L 420min, RGB 60min each) while Fred Stevenson’s image was a 40min exposure using his 14-inch Meade and Meade DSI Pro III camera.

When observing galaxies nothing really compensates for aperture and sky transparency, but even in a 15–20cm telescope from a reasonably dark site (with a limiting visual magnitude of, say, mag. +5.0), this galaxy will be visible as a ghostly thin shaft of light. As with all visual observations, locate the object at low power and then try various magnifications to see what extra detail, if any, can be teased out. High power may well reduce the amount of halo you can see, while at the same time bringing out more detail in the core.

One fascinating feature of NGC 5907 seen in deep images is a tidal stream of stars that surround the galaxy, making it look rather like a spider’s web with a captured fly. Discovered in 2006, an image of this tidal stream is shown on the NASA Astronomy Picture of the Day (APOD) website for 2019 Nov 16 (go.nasa.gov/39glkc7; it also featured on the website in 2008 Jun 19). Although there is still discussion as to how this feature formed, it is likely to comprise stars left over from a dwarf galaxy torn apart by its interaction with NGC 5907 several billion years ago. This could be an example of a method by which spiral galaxies grow through accretion of their smaller neighbours.

Close by to NGC 5907 lies the 10th magnitude lenticular galaxy NGC 5866 (RA 15h 6.5m, Dec. +56° 46″). A bright galaxy well seen in a 20cm telescope, it has attracted a certain amount of notoriety following a suggestion a few years ago by Owen Gingerich (Harvard University) that it could be the missing Messier galaxy M102. Messier 101 was discovered by Messier’s observing colleague Pierre Méchain in 1781 and is a superb face-on spiral in Ursa Major, quite unlike the cigar-shaped NGC 5866. Méchain himself, in 1786, stated that M102 in Messier’s catalogue was an error and that it was in fact a duplicate observation of M101. Despite this, some books and charting software still list NGC 5866 as M102. The evidence for it not being M102 is well argued by Stephen James O’Meara in his book The Caldwell Objects (Sky Publishing, Deep-Sky Companions Series, 2002). NGC 5866 is a splendid galaxy and well worth observing, but there is no evidence to suggest that it is the missing M102, while there is Méchain’s own evidence to suggest that it isn’t. An image of the galaxy by Andrea Tasselli, using the same equipment set-up as his image for NGC 5907, is shown here.

As always, if you observe or image any of the galaxies mentioned here, do send your observations to the Deep Sky Section.