Variable stars – an introduction
We have seen already that not all of the stars in the night sky are the same colour – the brilliant star Vega is bluish, Arcturus in Boötes the Herdsman is orange and so on. The light from stars can tell us important things about a star’s temperature and age, but for some stars the light they emit is not constant: it varies over time. These are called ‘variable stars’, and the members of the Variable Star Section (VSS) of the BAA have been studying these stars since 1890 – the year our Association was formed.
Some of these variable stars can be observed with the naked eye, many with binoculars, and a telescope will reveal thousands of them. Variable star observing can be done at any level of experience – some amateurs (like me) simply record the magnitudes of a number of variable stars as part of a wider observing programme. Gary Poyner is a dedicated variable enthusiast and has made over 275,000 variable star observations! Others take on advanced projects and collaborate with professional astronomers. Regular observations of a star’s brightness (called its apparent magnitude) produce a lightcurve which can tell us a great deal about the physics of these stars.
The main observation involved in variable star observing is to make routine estimates of a star’s magnitude. Details of how to do this can be found on the VSS website (http://www.britastro.org/vss/absolute_beginners.htm); in this article however I’m going to stick to the basics and look at the different types of variable star that can be found in the night skies, and make some suggestions on which stars to begin observing.

Different types of variable star
In the modern era, the first variable star to be identified as such was the red giant Mira (Omicron Ceti) in the constellation of Cetus, the Whale. In 1638, the astronomer Johannes Holwarda noticed that Mira’s magnitude varied over the course of 11 months. Algol the ‘demon star’ in Perseus was described in 1669 by Geminiano Montanari and gradually over time, others were found. Once photography was employed, many thousands of variables were catalogued.
Although astronomers have several different classifications for variable stars, broadly speaking they fall into two groups: intrinsic and extrinsic variables. Examples of intrinsic variables include:
–    Pulsating variables. These are stars which expand and shrink with a set period over time. Mira (Figure 1) is a good example; over a period of 332 days the surface of Mira expands and contracts, producing changes in temperature and brightness. At its maximum brightness Mira at mag +2.0 is an easy naked eye object, but it can dim to as little as +10, requiring binoculars or a telescope to see it. 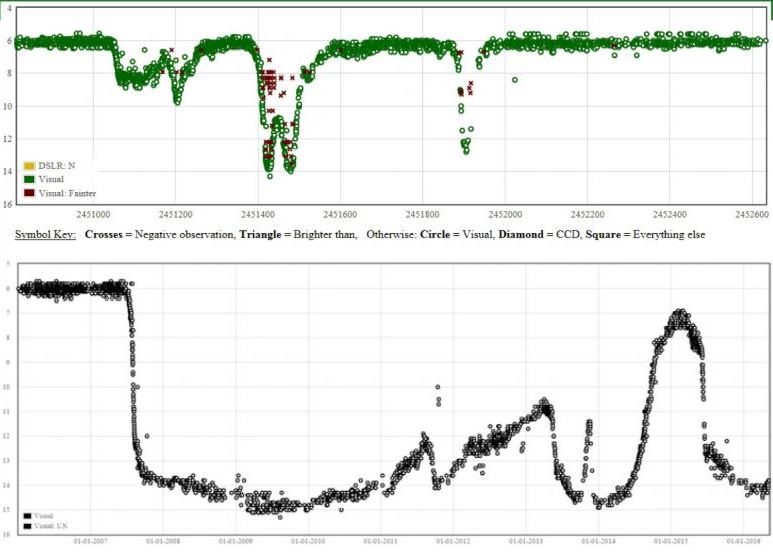 –    Eruptive variables are stars which undergo violent flare activity, expelling material into space which causes them suddenly to vary in brightness. They do this at irregular or semi-regular intervals. The star R Coronae Borealis (Figure 2) is an eruptive variable, although rather than becoming brighter, it suddenly fades by as much as 9 magnitudes as clouds of dust and debris obscure the star from view!
–    Rotating variables are stars which have vast ‘sunspots’ on their surface, which as the star rotates causes it to change in magnitude. None are currently known to be observable with amateur equipment.
–    Cataclysmic variables (CVs) are, as the name suggests, stars which have occasional violent or cataclysmic outbursts. These are caused by thermonuclear processes either in the stars’ surface layers or deep within their interiors. The majority of them are close binary systems, with their components having strong mutual influence on the evolution of each star. Often the hot dwarf component of the system (the primary) is surrounded by an accretion disk formed by matter lost by the other, cooler, and more extended secondary – changes to the disk cause the primary star to brighten. The star SS Cygni (Figure 3) is a splendid example and undergoes a dramatic brightening every 7 or 8 weeks. This type of CV is often referred to as a dwarf nova.
Novae and supernovae are also sometimes classed as cataclysmic variables. A supernova is one of the most dram

atic events in the Universe and marks the final end of a supermassive star (called the progenitor star). When a star becomes a supernova it can produce as much energy as an entire galaxy. After this dramatic brightening the star fades away, as gas, dust and new elements are returned into the intergalactic medium, ready to form new stars and planets.
A nova is the result of a different type of explosion; the progenitor star isn’t destroyed, but the system may brighten by 7 to 16 magnitudes in a matter of one to several hundred days. After the outburst, the star fades slowly to the initial brightness over several years, and may remain at this quiescent magnitude for centuries or decades before undergoing a new outburst.
Classes of Extrinsic variables include:
–    Eclipsing binaries. These are binary star systems, which to the naked eye (and to amateur telescopes) appear as a single star. Much of the time they are at a constant magnitude but there will be times when the secondary star passes in front of the primary, temporarily blocking some of its light and causing it to fade. There will also be times when the primary passes in front of the secondary, causing a smaller drop in light (Figure 4). The star Algol in Perseus was the first such system to be identified as an eclipsing binary. 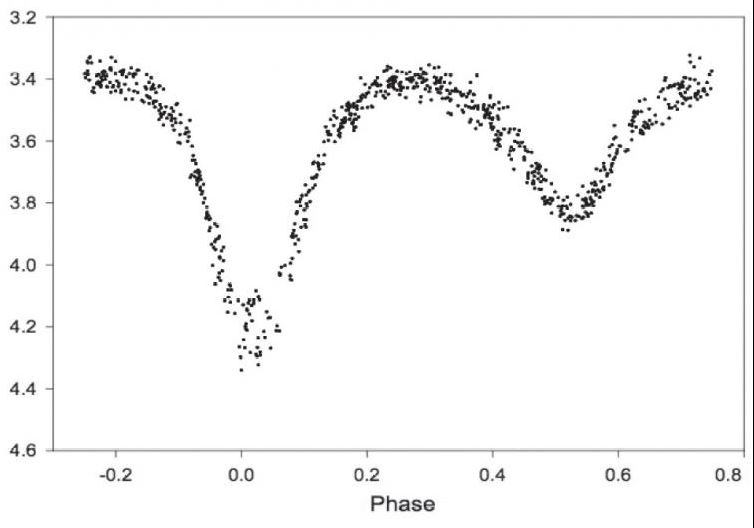 –    Planetary transit systems. Stars which have large planetary bodies can also vary for the same reasons as an eclipsing binary system. The drop in light levels is a great deal smaller, but nonetheless, amateurs with access to very large telescopes are starting to undertake this work. When I first started in amateur astronomy a few decades ago, there were no extrasolar planets known – we are now living in an age where amateur astronomers can even help confirm their existence!

Observing variable stars
Observing variable stars is a fairly straightforward task. You can either observe them visually, or with a CCD or DSLR and the VSS gives details on how best to do this. You can choose to make naked eye or binocular observations, or you can make observations with a telescope. Not all stars are circumpolar (i.e. visible all year round), so to begin with it might be best to choose a star which is high in the sky so you can observe it on a regular basis.
The most difficult part of variable star observing is tracking down and identifying the star in question. Even if you’re familiar with the night sky, it may take some time to find the elusive variable. Naked eye and binocular variables are not too difficult to find as they are usually quite bright or have brighter stars nearby which can be used to point you in the right direction. Telescopic variables may require a little bit more work. The VSS produces star charts which will show the variable and a number of comparison stars which are known not to vary (these are needed to make estimates of the magnitude of the variable star in question).
There are two methods you can use to find a telescopic variable (if your telescope is not fitted with ‘goto’). Either use your setting circles and slew to the correct position in RA and Dec, or else you can star hop to the variable.
To get the best out of the star hop method, it is best to explore the area around the variable on some free software like Stellarium (http://www.stellarium.org/en_GB/). Try to find a bright and distinctive nearby star, then trace other stars which will point you towards the variable. I would recommend using a low power eyepiece, and when you have arrived at the location where you think your variable star lives, you then need to use the VSS star charts to identify the field stars (i.e. the stars in the background surrounding the variable).
At first this might seem tricky, but very often you’ll find that the field stars make nice little groups of triangles or other shapes which can help you identify the variable star correctly. It is probably best to start off with binocular variables which are easier to find before you tackle the telescopic ones.

Star colours can also be of help here – use Stellarium to see the colours of your star hop stars, so you can be sure you are using the right ones. If your target is a pulsating variable, it will often have a deep red colour itself, and this can also help with identification.
In the table I have given a list of some naked eye and binocular variables which will be good targets over the next few months. Long period variables only need to be observed once a week, but short period variables and CVs should be monitored as often as possible. Remember to send in your results to the Variable Star Section!
Observing variable stars is great fun, and provided you send them to the VSS, your observations will be of value to astrophysicists who study these dynamic objects.
Paul G. Abel