UK Meteor observing in the first quarter of the Twentieth Century 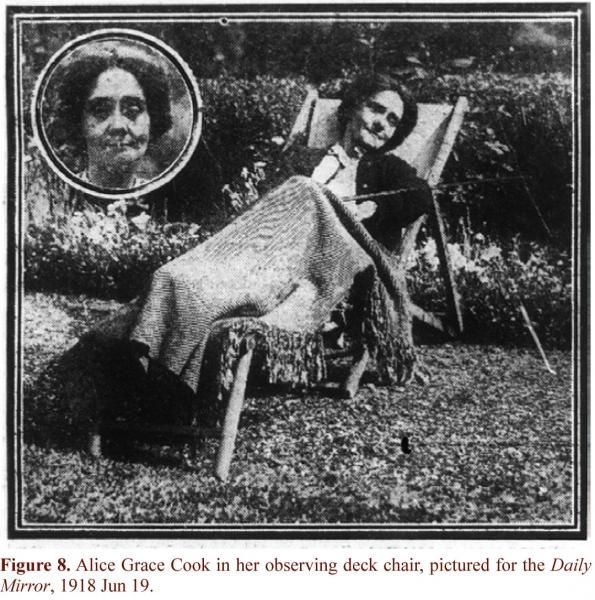 The established method of observation was to use a thin, straight wand about 5ft (1.5m) in length. Remaining mentally alert, observations were carried out from a deck-chair using this wand and a stop-watch. The instant a meteor appeared, the wand was held at arm’s length parallel to its path, and the stop-watch was used to record the duration of the meteor’s appearance. The magnitude of the meteor was estimated by comparing it with adjacent stars and planets. When the observer had all these details fixed in their mind, they were noted down. Once a night’s observing was complete, the recorded paths could be transferred to a celestial globe. Taking reverse tracks along the recorded meteor paths allowed the radiant point to be determined.

As an aid to observation, Grace Cook also used a meteoroscope… This piece of equipment had been designed by the Rev Martin Davidson (1880–1968) and was intended to ease the task of meteor observing, although it was only operable after some initial difficulty. It was exhibited at the BAA meeting of 1921 Mar 30. Reading the description reveals very little similarity to an 1848 instrument of the same name by James Challis (1803–’82). A meteorometer was also devised by Davidson around this time, to rationalise discordant observations (Figure 6).

The BAA Meteor Section had five Observing Directors during this period. The first was Walter Ernest Besley (1877–1905) who served from 1900–’05 followed by Miss Catherine Octavia Stevens (1864–1959) from 1905–’11; the Rev Martin Davidson from 1911–’21; Alice Grace Cook from 1921–’23; and finally John Philip Manning Prentice (1903–’81) who served from 1923 onwards. An active observing and recording programme was carried on, despite the section sometimes operating with very few members. Observing reports were used to identify meteoric radiant points. One theory pursued was that of ‘Stationary Radiants’, proposed by W. F. Denning. According to this theory, meteors could be seen emanating from a single point in the sky for several months at a time. ‘Proof’ of this concept appeared in 1922, when Cook and Prentice claimed to have observed meteors coming from a stable point near ε (Epsilon) Arietis between July and December, despite the Earth moving through nearly half its annual orbit in this period. It is now accepted that these were merely coincidences of random sporadic meteors…(continued)