Almach: a triple star once more 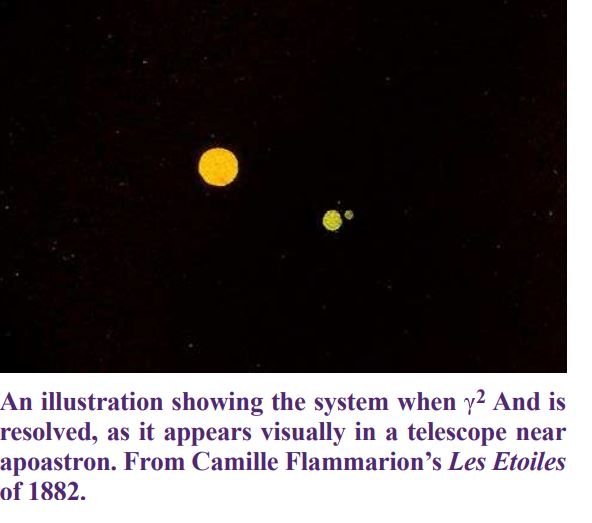 The beautiful double star Almach, or γ (gamma) Andromedae, is one of the great telescopic sights of the October skies and one of the finest colour-contrasted doubles in the heavens. Until 2003 a good telescope of at least a 10-inch (0.25m) aperture, at high power and under the best seeing, would have shown this beauty as a triple. This is because the blue component of the obvious double (γ2 And) is the famous binary OΣ 38, which revolves in a highly elongated orbit every 62 years.

For most observers, that ceased to be the case around mid-2003, as OΣ 38’s highly eccentric orbital motion took the apparent separation of its component stars below 0.4arcsec, where they have been ever since. The system passed through periastron in mid-2014, at which point – with a separation of about 0.021arcsec – γ2 Andromedae was well beyond the resolution limit even of the Hubble Space Telescope.

In truth, the exact separation of the stars at their closest remains completely unknown, as there appear to have been no published measures of the binary since early 2010. This is despite the periastron being the first which could have been observed with a technology – speckle interferometry on 4-metre class telescopes – powerful enough to resolve it. It will now be nearly another 60 years before this deeply unfortunate omission can be rectified.

In the meantime, the two stars of OΣ 38 are now swinging apart again and are just – infinitesimally just – rising above the uttermost limits of double-star detection in amateur-size instruments. They have been closely followed with the 12½-inch reflector at Hanwell Community Observatory, working at ×825. In 2011 & 2015, γ2 And appeared ‘round as a button’ to the most intense examination in very good seeing – not a ghost of a hint of its being a double star. However, over 12 nights of determined scrutiny in the last evening apparition of 2018/2019, it was repeatedly seen just beginning to tease apart into a very slightly, but quite unmistakably oval ‘olive’ shape. This is still well short of actual resolution, which will not be possible in this aperture for at least four or five years. However, the author urges readers with any experience of, or appetite for, high-power observation of very close, sub-arcsecond double stars to have a go at following this.

In a detailed paper submitted to the Journal, the author has revised the orbital elements of OΣ 38 to optimise their fit to all the best published measures on the relevant periastron-arc, from which this ephemeris computes the values of ρ (separation, in arcseconds), for the following years:

This is a fine challenge presented by a gorgeous system – do have a go!