The European Planetary Science Congress, one of the largest gatherings of astronomers and space scientists in the world, is held each year in a different European city. 2013 was the first time it had been held in the UK, and it attracted 960 attendees over six days, September 08–13. These were mostly professional planetary scientists, but with a smattering of amateurs, including many BAA members, some of whom prepared posters or presented talks in the main conference sessions.
On the Thursday there was a short session devoted entirely to amateur work, but the BAA meeting within the congress on Friday Sept 13, organised by David Arditti and jointly chaired by him and John Rogers, allowed far more time for the range of leading-edge amateur work on solar system bodies to be discussed.
The meeting lasted the whole day and involved ten speakers, with demonstrations during the breaks of analysis and processing software, for those interested, on the computers supplied in the room.
David Arditti introduced the day and described recent developments in amateur planetary imaging, including developments in high frame-rate camera technology, the increasing use of dispersion correctors to remove the smear of light due to atmospheric refraction within specific filter wavebands, and the methods used by the latest image stacking software, including the de-rotation of images taken over a time period.
Tony Cook of the Lunar Section then gave two talks, separated by a coffee break, the first on how to observe impact flashes on the Moon, and the second on the interpretation of varied Transient Lunar Phenomena (TLP) observations. In the discussion on the latter, always a controversial topic, it was remarked how work presented in another session in the Congress may be shedding light, by analysing electrostatic lunar dust levitation and guiding by surface magnetic anomalies. Could clouds of such dust be responsible for what observers have interpreted as TLPs? The jury is still out.
The last talk of the morning was given by Richard Miles, Director of the BAA’s Asteroids & Remote Planets Section, who had already given a talk on comets 29P/Schwassmann-Wachmann and 17P/Holmes in another session that morning. He covered the whole range of amateur work on asteroids, including shape and rotation determination by photometry, occultation timings, and how colour measurements can give an indication of composition and class. It is remarkable how much physical understanding can now be gleaned from simple observations of these objects, that not many years ago were merely regarded by observers as curious, moving points of light.
After lunch Dr John Rogers took the chair and the spotlight turned to events on the giant planets. Marc Delcroix, visiting from France, described software that he and several colleagues had developed to automate the detection of impact flashes on Jupiter. The first of these flashes to be seen was reported by two amateurs, Wesley and Go, in 2010, with subsequent detections by Tachikawa and Kazu (2010) and Petersen and Hall (2012). These discoveries were serendipitous, but the development of software to scan through every frame of captured video of Jupiter should allow amateurs to constrain the rate of impacts on Jupiter of objects that produce an observable flash, which would be important information to have.
Without such software, these flashes get averaged-out in normal image-stacking, and might be missed. Delcroix was asked if his DeTeCt might be useful also in detecting flashes on the Moon and Saturn. With further modification it might, though the rate of observable impacts on Saturn with amateur telescopes is likely to be very low or zero.
Paul Abel then gave a talk entitled Uranus: An Aqua Marine Mystery, in which he traced the history of observation of the planet, what is known about it today, and what both visual observers, and imagers using visible and invisible wavebands, might record with careful, concerted study, now that the planet is north of the celestial equator and increasing in altitude every year for northern hemisphere observers. Making a plea for more observations of this neglected body (to be sent to the Saturn Section, please), he succeeded in conveying his enthusiasm for the ice giant.
A trio of contributors, Michal Jaquesson and Christophe Pellier from France, and Manos Kardasis from Greece, presented the next section of the meeting, on the various uses of the WinJupos measurement and analysis software developed by Grischa Hahn of the Jupiter Section. This has long been invaluable for determining the latitude and longitude of features on Jupiter and Saturn, and has acquired further value with the capability, in the latest versions, to make maps, various projections, and combine images taken at different times and in different wavebands, compensating for rotation (i.e. a de-rotation function).
Jaquesson outlined the conditions necessary to extract accurate measurements from images, while Pellier & Kardasis explained alternative methods of derotating videos, either frame by frame, or using stacking followed by derotation. The speakers demonstrated the software in more detail to those who wanted to see in the afternoon tea break. 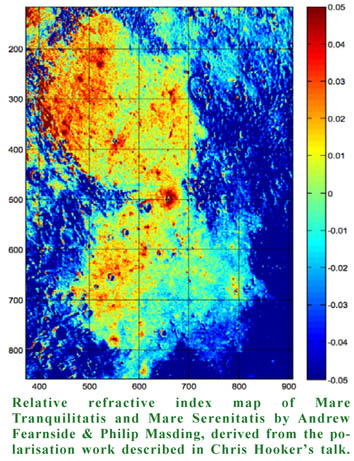 After the break, Chris Hooker took us back to the Moon to explain a method he had been using, developed with Andrew Fearnside & Phil Masding, for analysing the lunar regolith. It turns out that lunar minerals reflect light in a preferentially-polarised manner, and measuring the brightness differences in images taken with a polariser in different orientations can yield refractive index information related to the composition of the lunar surface. This project is at a fairly early stage, but has given interesting results consistent with data from space missions, and more observers are needed to try out the method.
The day concluded with a talk by Prof Nigel Mason OBE from the Open University. He coordinates the British component of a joint European project to set up a comprehensive online database of atomic and molecular spectra (the Virtual Atomic and Molecular Data Centre, at vamdc.eu). He believes this might be useful to amateur as well as professional astronomers, and could be the basis for PC-based ‘Citizen Science’ projects, yet to be developed. His talk was a call for people to look at the database and think about future applications, but it also ranged more widely over the future of European funding for research, which was, he said, likely to be closely tied to amateur and citizen activity. The BAA could be in a good position to coordinate and benefit from this in our area of expertise.

Due no doubt to being held on a working day, attendance at the meeting was not as high as at many BAA meetings, but this was offset by the benefit of having, unusually, so many of our overseas members, and some of our most active observers, together in one place, as a result of the attraction of the week-long EPSC programme. Non-BAA Congress attendees were welcome, and a few looked in.
Thanks are due to the organisers of EPSC 2013 for allowing us to use the facilities. Pro-am connections in planetary science, and the reputation of the BAA as a vital linking organisation, were certainly enhanced as a result.