Amateur discovery of a nova in the Andromeda Galaxy 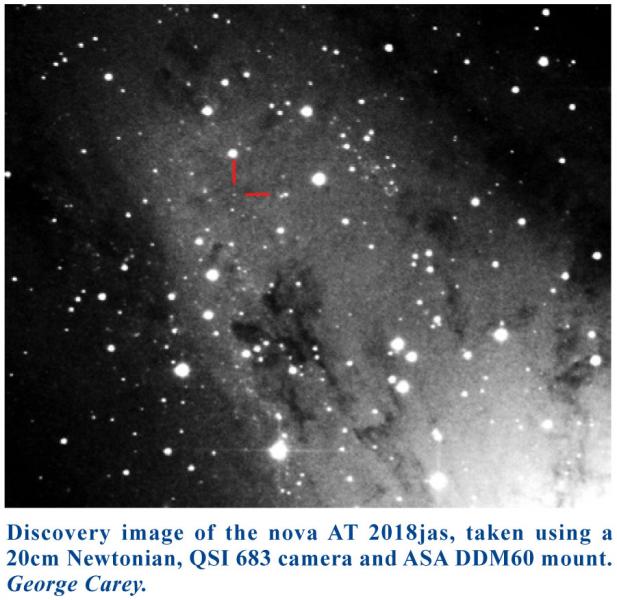 The weather forecast for 2018 Nov 26 was atrocious, with cloud and rain expected non-stop. I was therfore surprised when I looked outside at 6pm and saw an absolutely clear sky – the forecast was checked and this clear spell was likely to be very brief. I nearly returned to the television and a mug of coffee, but I was aware that M31 (The Andromeda Galaxy) had been strangely quiet for many weeks.

There was no time to turn the camera on to warm up, so images would be taken at ambient temperature and full of hot pixels. The first image, an exposure of 600s, came through at 18:49 UT and, upon blinking against a reference image, a new object was clearly visible some distance from the bright core of M31. The second image confirmed that this was not a hot pixel or cosmic ray strike. Plate solving with the astrometric software PinPoint gave coordinates RA 00h 43m 44.56s, Dec +41° 27′ 52.4″ and an approximate magnitude of +19.

A check of 1100 previous coordinates for novae in M31 showed that it was not a recurrent, and the Minor Planet Centre indicated no asteroids in that area. The Transient Name Server (TNS) site showed no recent discovery announcements, and neither did the Central Bureau for Astronomical Telegrams. By now the CCD cooler had been switched on and the third image was cleaner, confirming the presence of the object. A message was dispatched to the TNS site, who promptly gave it the designation of AT 2018jas (the Max Planck Institute has since recorded a second designation of M31N 2018-11b). Denis Buczynski took a confirmation image showing the object, followed closely by an image from Peter Birtwhistle. 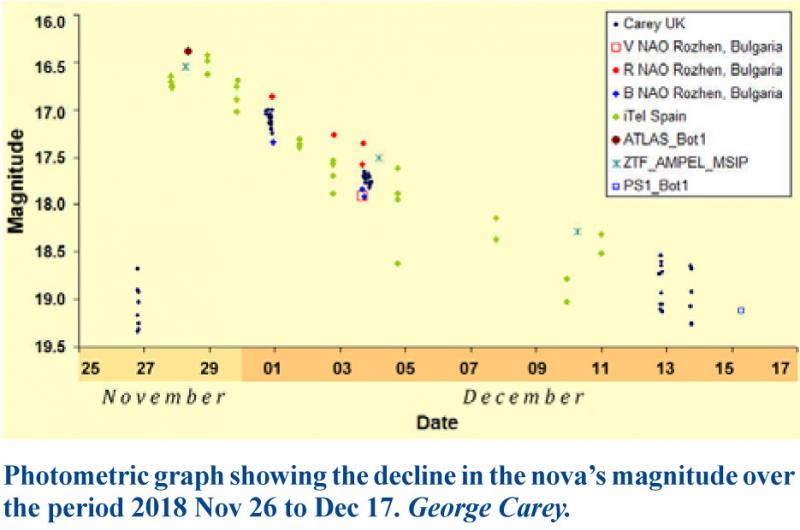 On Nov 27, Matt Darnley e-mailed to say that a spectrum had been obtained using the 2.0m Liverpool Telescope. The object appeared to be a ‘classic post-fireball Fe II nova’. The following day the Astronomer’s Telegram (ATel) No. 12245 was published, detailing the combined spectrum (giving the terminal velocity of the Hα, P Cygni line profile as ~4000km/s) and confirming that: ‘[the] spectrum indicates that AT2018jas is a classical nova eruption in M31 that has been caught in the early Fe II-curtain phase (immediately post-fireball).’

I observed the nova at every opportunity to capture photometry, and also took images using a remote telescope in Spain. The brightest magnitude was +16.39 on Nov 28, recorded by the ATLAS group. Several other observers took photometric readings, until the nova became dimmer than mag +19.