An asteroid for Pawel Maksym

Pawel Maksym was a 29-year-old amateur astronomer from Poland who was very active within the International Occultation Timing Association, European Section (IOTA-ES) and an 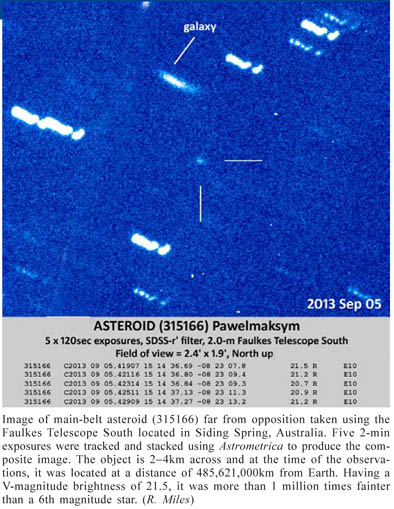 enthusiastic participant at the annual European Symposium on Occultation Projects (ESOP) conferences, presenting a talk each year and taking part in lively discussions in the lecture theatre, on trips, and in the bar. He organised the excellent ESOP XXVIII in Niepolomice, Poland, in 2009 and played a key role in the creation of the online Journal for Occultation Astronomy.

Pawel was a star of the next generation of occultation observers and was expected to progress the work of IOTA-ES far into the 21st century. Tragically however, he passed away on 2013 February 13 following complications after surgery.

Asteroid (315166) Pawelmaksym, discovered in 2007 at Charleston Observatory, South Carolina, was recently named in honour of Pawel and his role as an astronomy populariser in Poland. According to the citation ‘he was an expert in asteroid occultations, an active member of IOTA and co-founder of the Pope Silvester II Astronomical Observatory in Bukowiec. Name suggested by Barbara Dluzewska, from the Czacki High School in Poland.’ A tribute to Pawel Maksym’s life and work, written by Costantino Sigismondi, can be found at http://arxiv.org/abs/1302.6910.

The adjacent image of Pawel’s asteroid was captured by Richard Miles on 2013 Sept 5 using the remotely-operated Faulkes Telescope South in Australia. We hope it will be a source of some satisfaction for his family and friends. ESOP conferences will not be the same without him!