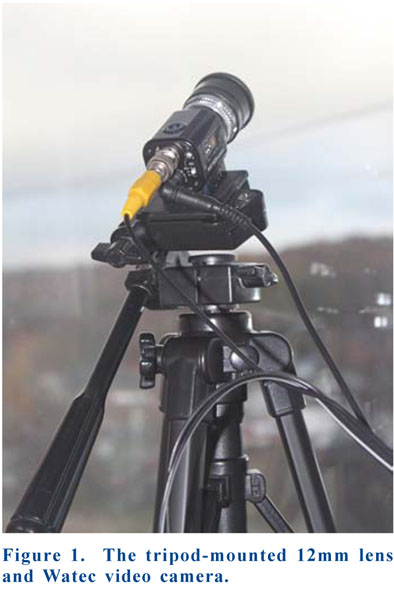 Several observers have recorded fine images of celestial objects by operating a camera from indoors.[1,2] My own Leeds NW and Leeds SE video cameras are located in externally-mounted CCTV housings,[3] but when I wanted to add a Leeds N camera it wasn’t convenient to set up a housing overlooking my cul de sac. A nice solution was to set up a UFO Capture PC[3] in a spare bedroom with a tripod-mounted 12mm f/1.2 lens and a Watec 902H2 Ultimate camera on a north-facing window sill (Figure 1). To minimise internal reflections the room is kept dark and the system gives good sharp images, even though it’s looking through double-glazing (Figure 2).

The equipment is surge protected and I don’t leave it running unattended if I’m away from home for more than a day. There is no need for a lens heater and it shouldn’t be affected by spiders, unlike some external housings. The 12mm lens has a manual diaphragm. The camera is not at risk of direct sunlight, although next summer I’ll check that there are no reflections from distant buildings. If so, it can be capped during the day. The 12mm lens was previously owned by the late Steve Evans, Photographic Coordinator of the BAA Meteor Section, so it’s rather fitting that it’s still being used to record meteors.