An interview with Alexandra Hart 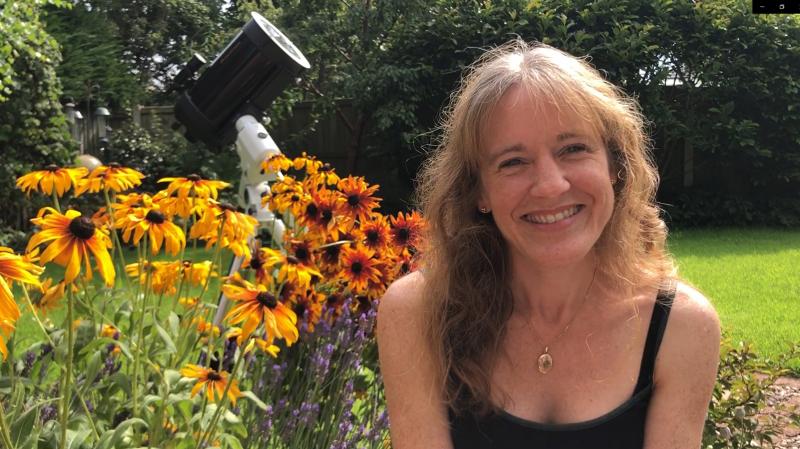 Winner of the BAA Steavenson Award in 2020 for an outstanding contribution to observational astronomy, Alexandra Hart is a renowned solar imager whose thousands of instructional posts on the SolarChat forum have encouraged many others to take up the hobby.

What does receiving the BAA Steavenson Award mean to you?

I feel very honoured, although I am not sure I deserve it as there are many others doing equally good work. I have become so passionate about and in love with the Sun that it seems only natural to want to learn more about it and share it with as many people as possible.

I was very surprised to hear that this was the first time a woman has received one of the major ‘observational’ awards in the Association’s existence. One thing I have observed in amateur astronomy is the lack of diversity in the hobby, with low numbers of women and ethnic minority groups. They are there, but they tend to go the whole way into professional astronomy instead. Therefore, we need to encourage a greater diversity of people to be interested and help share the passion of doing science from your own garden. A future goal for the BAA?

How did you start out in astronomy, and why solar imaging?

I became interested at a very young age as my mother was a keen amateur. She had a telescope from when she was small and her treasured possession is a letter that Sir Patrick Moore wrote to her after she asked him a question. I think it was his encouragement which made my mother encourage me. My most memorable moment in childhood was her describing how amazing Halley’s Comet would be. When it finally arrived I’m not really sure whether I spotted it through the binoculars or not, but I got very excited and said I could see it anyway to make her happy.

My enthusiasm never waned. When I got married the beautiful Comet Hyakutake graced the skies during our honeymoon. After that we bought our first telescope together, but the skies in Cheshire are made very poor by light pollution and are getting progressively worse each year. After failing to spot many deep-sky objects in our skies, we were allowed by our local astronomy shop in Stockport to exchange my night-time telescope for a Coronado PST. This exchange changed my life. The Sun is the most amazing object in the sky; it changes moment by moment and never fails to show you something new and beautiful.

How did your involvement with the SolarChat forum come about?

I was there from the very beginning, supporting it when it was first created and hosted by Stephen Ramsden and the Charlie Bates Solar Astronomy Project (CBSAP). I’m a member of the CBSAP and the aim of the forum is to bring together solar astronomers across the world to share the Sun with others, particularly students and the public through outreach events. I help moderate the forum, provide encouragement and help, and award the Solar Picture of the Day (SPOD). We have grown this forum to be one of the biggest of its kind in the world.

You have been investigating polar faculae, as detailed in a paper to be published in the Journal soon. Why is observing this feature important?

Observation of any feature on the Sun, however small, is important. Professional astronomers tend to get tied up with the bigger questions, as funding is usually only given to the sexiest projects. So, the day-to-day observation of the smaller items of interest come down to the amateur, who does these observations for the pleasure of extending knowledge.

Earlier in the year [2020], Peter Meadows (Assistant Director, BAA Solar Section) described polar faculae, of which I had never heard before, and set a challenge to observe and report them. They immediately piqued my interest and I set about learning more. After observing them I noticed that they could be seen in two other wavelengths of light in the chromosphere, and not just the photosphere. I researched further and discovered that not much had been published about them in the professional world.

After sharing my ideas and consulting with a professional astronomer I pieced together what the magnetic regions of the polar faculae in the photosphere looked like and how they translated into features seen in the chromosphere.

How did your involvement with Citizen CATE (Continental America Telescopic Eclipse) come about, and can you tell us about the project?

A professional solar astronomer, Dr Matt Penn, had a vision to film the inner corona of the Sun for the entire total solar eclipse across continental North America in 2017. The aim was to capture it in a relay as the umbra tracked across North America, then combine the videos together to give a sequence about 90 minutes long. SOHO routinely films the outer corona, but the inner corona has never been studied for any period longer than totality [in a single place].

Matt initially put forward his plan on the SolarChat forum and many of us gave valuable advice about the best equipment etc. I volunteered and the job assigned to me was to pinpoint viable locations for CATE teams to image the eclipse from. This was no mean feat, since sites had to be found within 50 miles of each other for the videos to fit seamlessly together in sequence (with a little overlap). I sat for many evenings and weekends, scouring Google Earth to find locations, following as close to the centre-line of the eclipse as possible. It was a bit of a jigsaw puzzle, because if a suitable location couldn’t be found within 50 miles I had to backtrack further along the path so that the intervals did fit. When the task was complete I felt I had personally walked the entire width of North America along the eclipse path and knew every road and path. I targeted towns with schools as a priority and the sites had to be accessible by car; I learned the hard way just how barren and inaccessible some areas of central North America are.

Unfortunately, I wasn’t able to be part of a team on the day as living in the UK meant I was unable to attend practice sessions. The mission was a success in the end, with nearly all the sites getting some usable data. More than 20 high schools, 20 universities, five national science research labs and five corporate sponsors, as well as informal education groups and astronomy clubs across the country, completed the task. Data from a small subset of sites was published in 2020, but the main data set was still unprocessed. Here, my knowledge of the skill sets of SolarChat members was utilised, and I was able to introduce Matt to a forum member who has the computer programming skills needed to automate and align all the images for each site. The onerous task is now nearly complete and this data set will soon be released into the public domain (see nso.edu/citizen-cate/).

If you could see one mystery about the Sun solved, what would it be and why?

If we could accurately model and predict how strong the next few solar cycles are going to be then it would prove we were well on the way to understanding how the magnetic field influences the behaviour of the Sun. This in turn would help us better understand how to accurately predict when an active region will erupt and how energetic the solar flare will be. Having accurate space weather predictions would allow us to protect vital satellites, communication arrays and even astronauts who may eventually be sent to Mars. At the moment models are promising, but never very accurate.

On a selfish note it would help my solar observing too. I have sat for many hours watching active regions in the last solar cycle which were predicted to unleash an X-class flare within 24 hours, and I still haven’t witnessed one.

Has lockdown affected your observing?

Yes, it got better, but don’t tell my boss at work. With lockdown I found myself suddenly working from home and on sunny days I was able to sneak out, view the Sun until 10 a.m., then go back to work without anyone noticing too much. This flexibility was a joy; I normally work full-time five days a week and can only observe on weekends. The usual weather conspiracy in the UK favours cloudy weekends and sunny weather during the working week. In spring of 2020 the weather was fantastic during the week, with the most sunny days on record and not even an aeroplane vapour trail to ruin it either.

I’ll never forget the many relaxing lunchtimes spent out in the garden sketching prominences, which I would never normally have the time to do. I don’t think 2020 will ever be beaten – it was just a pity it was at solar minimum.

What would your advice be to someone starting out as a solar imager?

Keep it simple and use the equipment you have already to start with; a mobile phone can take a fairly decent image of most things seen through the eyepiece. If you want to do more, buy a sheet of Baader solar film and make a filter to cover the front of your telescope or camera. It is really cheap and fun to make, only make sure it is really securely taped to the front so it doesn’t blow off in the wind when you are looking through it. You will get great views of the photosphere and, if you are lucky, some sunspots.

If you get more serious then the starter telescope I would recommend is a Coronado PST. You will get marvelous views of prominences and, as Cycle 25 activity increases over the next few years, maybe some solar flares as well.

As you progress you may want to image the chromosphere; for this a good monochrome video camera is best suited to the job. Take a series of videos, run them through a stacking program like AutoStakkert and stack only the very best frames. There are loads of helpful posts and tutorials available in the SolarChat forum reference library and also a tutorial written by myself, which can be found at: bit.ly/30unCme.