Analysis of a Perseid fireball spectrum 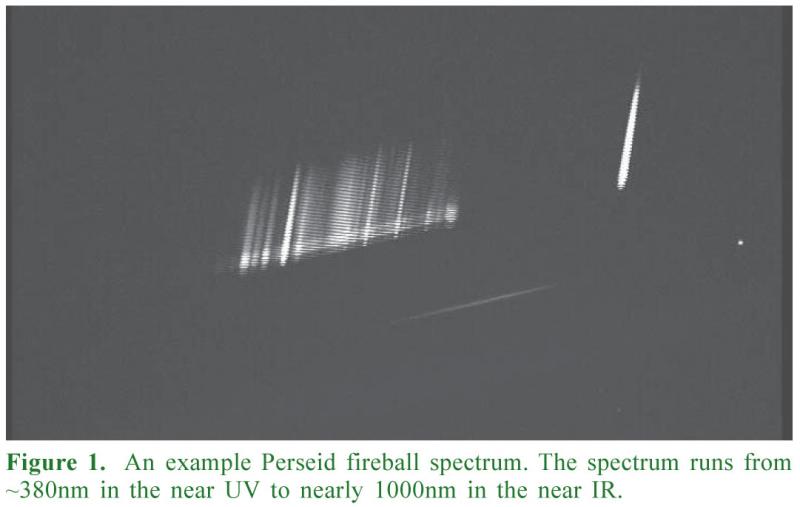 Analysis is presented of a Perseid fireball spectrum recorded by videography on the night of 2013 August 12/13.  This is unusual in that two significantly different spectra were obtained in one of the video frames, which we interpret as being due to an afterglow following an end flare of the fireball and emission from the surviving fragment.

Introduction
Video meteor spectroscopy observations were made from Kilwinning, North Ayrshire, UK on the night of 2013 August 12/13 during the Perseid meteor shower peak. A bright fireball was captured of sufficient brightness and had a path such that the 1st, 2nd and part of the 3rd orders of spectrum were recorded.
Initial examination revealed the emission lines of the metal elements found in most meteors. However during a frame by frame inspection of the video a remarkable event was discovered. Within a single video frame the initial spectrum was observed to have undergone a transition into two significantly different spectra.

Video meteor spectroscopy
Video spectroscopy is an important tool in modern meteor observing, allowing the composition of the meteoroid to be determined during its ablation. The equipment used for this observation was a Watec 902H2 Ultimate CCTV camera with a Pentax 12mm f1.2 lens. A 25mm square 300 grooves/mm grating was mounted directly in front of the lens. The video output was fed to a PC with a PCI video capture card, and the images captured using the UFO Capture suite.
Figure 1 shows an example of a Perseid meteor with the first-order spectrum also captured on the night of August 12/13. The actual meteor is the bright line at the right of the image and represents what is called the zero-order image. In this image the spectrum is dispersed from blue to red, running from right to left. The star in the frame is Capella. Compared to Capella the image illustrates the brightness of a meteor required to generate a good first-order spectrum. By visual inspection and comparison to other measured spectra the elements emitting the brightest lines can easily be identified in this kind of image.