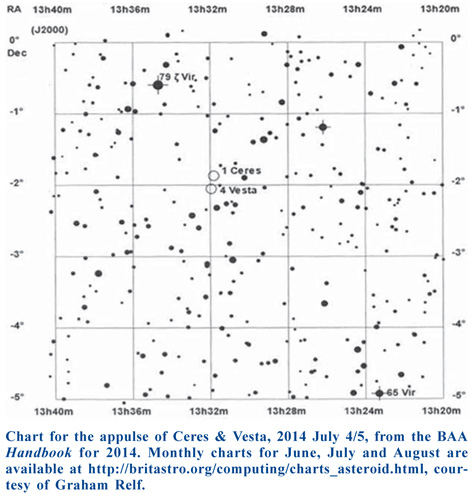 Jean Meeus drew attention to this appulse back in 2012 October in an e-mail to Paul Abel and myself. Jean wrote, ‘In April 2014, these two asteroids will reach opposition with the Sun at a time interval of less than 48 hours. During almost eight months they will stay less than 5° from each other in the sky, and during almost two months at less than 2°. On 2014 July 5 their angular separation will be only 10 arcminutes, their least angular distance since at least the year 1800.’
(4) Vesta is unusual in that the mineralogy varies across its surface, and these differences can be seen as changes in the colour of reflected sunlight as it rotates. Recently the Asteroids & Remote Planets Section has begun to take an interest in close appulses of minor planets with the aim of discovering objects which exhibit colour variegation, as does Vesta. Thanks to Graham Relf, ephemerides of favourable close approaches are now posted on the Computing Section website.
The Ceres-Vesta appulse during June and July is an unrivalled opportunity for anyone equipped with a DSLR camera to participate in a project to measure colour changes in images of Vesta.
To do this you should take a series of images in RAW mode spanning several hours to capture both bodies in the same field of view. The longer the time-series, the better, as you will have to wait 5.34 hours for Vesta to rotate once. What is most important is that the exposure time used should not saturate pixels in the image of Vesta, which will be about mag 7. To avoid this, set the camera on a low ISO setting (say 100 or less) and defocus slightly so that the stars are  small discrete blobs – that way you can use a longer exposure without reaching saturation.
The most difficult part of this short project will probably be the analysis of the images. The idea is to secure images in three filters, and a DSLR does this in a single RAW shot by providing red, blue and green (RGB) images, which can be saved separately and converted to FITS files for analysis.
Let me know if you have any success in grabbing lots of images of these two famous asteroids, the targets of NASA’s current DAWN mission, and I can help with the photometric analysis. Good luck.
Richard Miles, arps@britastro.org