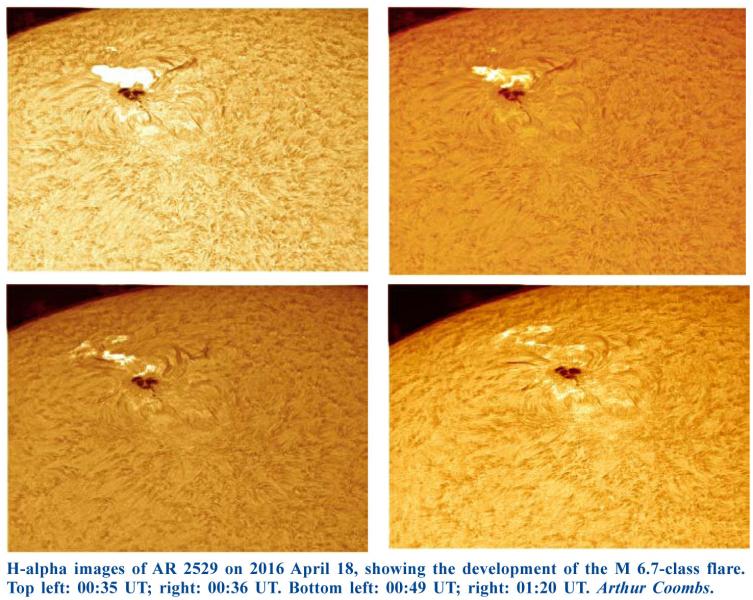 As Solar Cycle 24 approaches solar minimum the sunspot number has progressively become smaller, and there have been very few sunspots observed recently.
On 2016 April 7 a surprisingly large spot appeared, which was subsequently named AR 2529 – also called AR 12529 by some solar organisations.
Although seemingly quiet, it rapidly doubled in size over the weekend of April 9-10 and its core was crackling with C-class (minor) solar flares. On April 10 it hurled out a minor Coronal Mass Ejection (CME) which delivered a glancing blow to the Earth’s magnetic field on April 13.
April 13 saw AR 2529 in a central position, and apparently quiet. The author took a number of videos of the spot as it continued to develop. One image taken in the light of Hydrogen-alpha, shows the heart-shaped umbra and good surface detail. On the same scale two Earth diameters would fit into this dark umbral region.
On April 18, after recording a series of video images of reasonably good quality through high cloud, just before 10:30 a.m. local time with the cloud cover still persisting, it was time for one last look before closing the observatory.
Wow! Had the camera developed a problem? A large white patch had appeared near the sunspot. Moving the telescope showed the patch was indeed associated with AR 2529, and a video was taken immediately. No doubt this was a flare. A couple of phone calls and an e-mail alerted all ASV Solar Section members.
A shorter exposure revealed some structure hidden in the white patch as shown in the next image. Further imaging over the next 45 minutes showed a dramatic change in the shape of the flare as can be seen in the next images. Various members confirmed these observations.
All of the images taken by the author are in H-alpha light, through a Coronado SolarMax II 60-mm instrument with an ImagingSource DMK 21 CCD camera. Approximately 300 of the 1000 images were stacked and then processed to produce each final image.
Both Russell Cockman and Geoff Dudley reported seeing groups of light patches which persisted for some time after 00:30 UTC. Geoff reported seeing a light patch near the sunspot when observing with a white light filter, and Russell observed a bright flaring region through the Society’s H-alpha solar telescope. This patch corresponded with the first image taken by the author. It is extremely rare to observe this phenomenon in white light and Geoff is now the envy of other Section members who are yet to see a flare in white light.
ASV solar section member Darren Bellingham suggests interested readers may wish to investigate the 1859 ‘Carrington Event.’ This was the largest solar storm ever recorded. Aurorae were seen at the Earth’s equator! Richard Carrington and Richard Hodgson in England both witnessed a large sunspot ‘disappear’ as a massive solar flare erupted from it. They were the first humans known to have seen a solar flare in white light, although at the time they did not know what they had observed. The CME from that flare only took 17 hours to reach Earth. Further details may be found at https://en.wikipedia.org/wiki/Solar_storm_of_1859