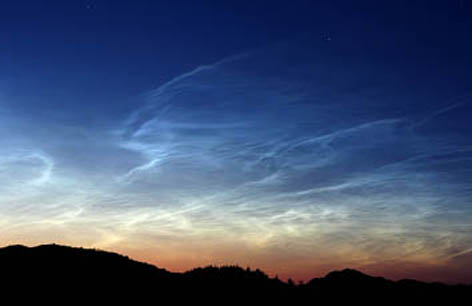 There is always a sense of anticipation as the noctilucent cloud (NLC) season approaches. Observers wonder when the first sighting will be reported and how the season will develop once the first sighting is made. The first reports of the 2013 season were of a weak display on May 22/23 from Port Glasgow and Edinburgh. This was quickly followed by a number of reports of a rather brighter and well defined NLC display on May 24/25. A single sighting from Latvia on May 26/27 was followed by a widely seen, bright and complex display on May 30/31.

It is interesting that the first sighting on May 22/23 was the same date as the first reported sighting in the exceptional year of 2009. It is also worth noting that solar activity was at its lowest in 2009, but this year should mark a point near to solar maximum. In 2010 and 2011, when solar activity was rising following the prolonged minimum, the earliest dates for NLC were significantly later than this year. (Another factor to be considered when comparing these dates must be the sky conditions and cloud cover prevailing at the end of 2013 May.)

Early June started off with some vigour and numerous reports were made of NLC from June 01/02 on every night with the exception of June 06/07.