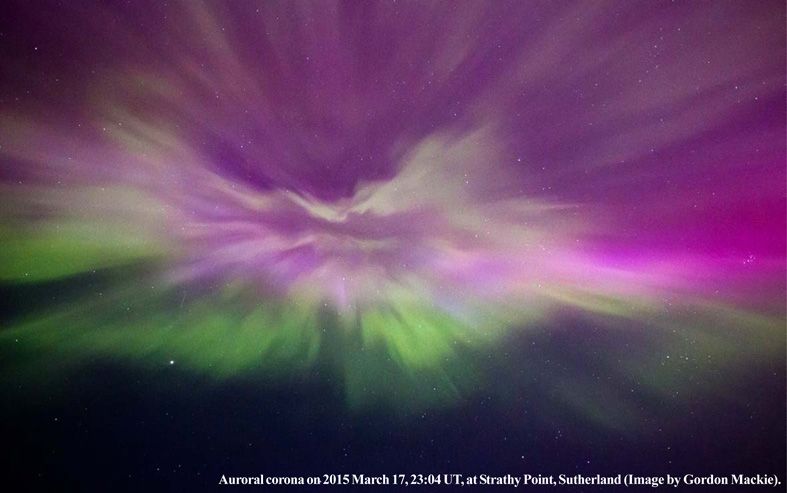 Auroral activity in the first few months of 2015 remained at relatively low levels with only a few major displays, but also a number of minor ones, particularly in March and April. This reflected the lack of significantly active areas on the Sun with the only notable event being on February 17/18 when a high speed solar stream was assisted by a southerly Bz, producing a G1 storm when the Kp reached 5. This produced a number of auroral sightings in more northerly areas during the third week of February.
Continuing the theme of solar cycle 24, sunspot numbers have been quite low and their sizes rather small from the beginning of 2015. Many of the high speed solar streams have been associated with coronal holes and a southerly Bz rather than originating from M or X class flares initiating CMEs. Sunspot numbers were particularly low between February 19 and March 05 but there was a revival of larger spots from April 11.
Active area 2279 produced an X2.2 flare on March 11 and an M3.2 flare the following day. On March 17 a CME impact was noted at 04:35 UT and with the Bz turning south from 05:30 to 09:00 UT, Kp levels reached between 7 and 8. A number of observers noted auroral activity on the night of March 17/18 and on a few subsequent nights including reports from North Dakota and Port Phillip Bay, Australia.
High speed solar streams occurred on April 15 and continued into April 16 with a G2 storm recorded on two occasions during that time. A raised Kp level continued for a few days and auroral reports were received from a number of locations from April 15/16 to April 17/18. Following lower Kp values after April 17/18, a weak CME together with a coronal hole stream caused the Kp to rise just after midnight on April 21 with Kp values staying at 4 for most of that day.
This summary of auroral displays from 2015 January until late April was compiled by Dave Gavine, Assistant Director of the Section:….

(Login or click above to view the full article with illustrations)