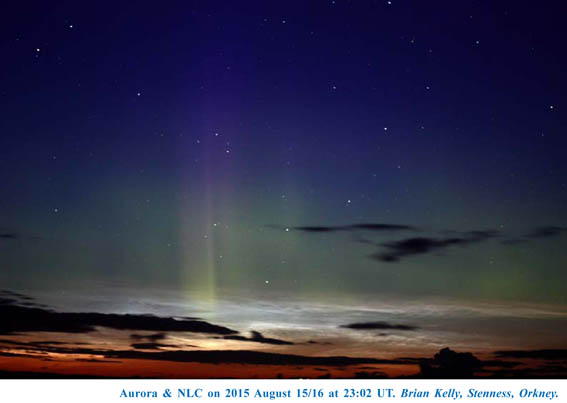 Noctilucent clouds in 2015
Following what was quite an early start to the NLC season in May, the number of reported sightings in June was disappointingly low. At the time of writing, the number of reports received in June was 127, which is far below the particularly good year of 2009 with 302 and fewer than last year’s 154. However, the number of nights on which NLC was seen in June was not particularly low at 24 although six of these nights were reported by a single observer in Canada, which brings the total nights on which NLC was reported in UK and Europe to only 18. This trend continued into July with most reports being received for the nights of 05/06, 10/11, 15/16, 17/18 and 23/24 July.

The total number of reports received during July was 121 which is again lower than all but that of 2012 when there were extremely adverse weather conditions in July of that year. NLC was reported on 24 nights in July which is close to the average of 25 since 2007. August saw a reduction in reports with only 12 being submitted for 6 nights in the month. However, as a parting shot, on the night of August 15/16 the unusual occurrence of simultaneous NLC and aurora displays was reported by a number of observers in Scotland.

During the season several observers commented that they had a feeling that NLC activity was less than in recent years and the Director had the same feeling, probably generated by fewer received reports, although personally recording as many displays as in previous years. The average number of nights during the seasons 2007 to 2015 is 60 and this year NLC was recorded on 59 nights which is not significantly lower than the average, especially considering the very active NLC years of 20072009 when solar activity was at its lowest. From data received this year, most observers would probably agree that displays were not as extensive as in previous years and the brightness of displays, which is always difficult to estimate, seemed to be lower. The images recorded by the CIPS instrument of the AIM satellite clearly showed ice in the mesosphere from May 19 and it was still quite extensive by mid-August, which suggests that poor weather and sky conditions over the UK and Europe may have been contributory to the smaller number of reports received this year. The jet stream spent some time during the summer months close to northern Spain and this would have produced more cloud to the north of it.

A summary of NLC for each night of the 2015 season will be issued at a later date when all reports for the season have been received. The Director would like to thank all those who submitted observations and images to himself and to Tom McEwan’s NLC website.

Aurora in 2015 July and August
Summer months are not the best time to observe auroral displays but July and August provided a few for more northerly observers. Significant solar flares during this period were few but the displays which were seen were the result of enhanced solar wind streams, sometimes associated with coronal holes and southerly orientation of Bz. A glow was seen from Edinburgh on July 04/05 and another with rays visible on images on July 22/23 while an active aurora was seen on the same date in North Dakota. A bright band with red tipped rays was seen from Lossiemouth on August 09/10 and another brighter display on the night of Perseid maximum, Aug 12/13 from 00:30 UT. A more widely seen display in northern Scotland occurred on the evening of Aug 15/16, and as mentioned previously, was accompanied for a time by a display of noctilucent cloud. Although these simultaneous aurora and NLC displays cannot be considered a common occurrence, it is interesting to note that this was previously reported on 2011 Aug 05/06, 2012 Aug 11/12 and 2013 Aug 04/05.

Auroral activity was again seen from Tarbatness on August 25/26 and 26/27 with a particularly good display on the latter date.