The Sun is very quiet and the 11-year cycle seems to be coming to an end, with 101 ‘no sunspot days’ already. This means that the majority of aurora will come from coronal holes. 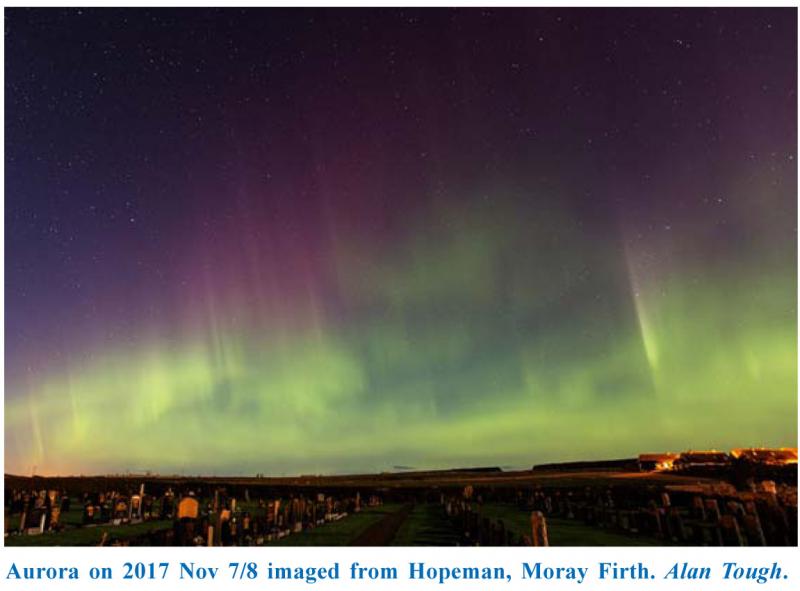 November produced one day of a G1 storm and 2 days of G2 storms which gave rise to 16 sightings. The first was by Graeme Whipps from the Chapel of Garioch on Nov 2/3. Nov 7/8 saw sightings by myself from Glenbarry, Graeme Whipps from the Chapel of Garioch, Denis Buczynski from Tarbatness, Gordon Mackie from Caithness, Alan Tough from Hopeman, James Fraser from Alness, Angus Stevenson from Lerwick and Jim Barber from Dundee. Graeme saw it again on Nov 8/9, 9/10, 14/15, 16/17, 21/22, 23/24 and 24/25.
December has been quiet with only 2 days of G1 storms and only 2 sightings. They were both made by Alan Tough from Hopeman, the first on Dec 13/14 and the second on Dec 17/18.

For those of you who are stuck in light polluted areas and would like to see the aurora live, a webcam operated by the Shetland tourist board at http://www.shetland.org/60n/webcams/cliff-cam-3 looks north from Sumburgh Head and, if there is no cloud, will give a good view of any aurora or NLC.

Finally, I received this email from Daniel Wagner (wagner.d@uni-jena.de):

Please send us your aurora observations from the 19th and 20th century as texts (also in english) and/or pictures. Please also tell us the location and the date of the observation (and if possible the time, direction and height as well as the colour). The results of the study will be communicated to all senders of observations. The senders will also be mentioned by name in the catalogue (unless they disagree).

If you have any queries, please do not hesitate to contact us. Many thanks – Daniel Wagner & Prof Dr Ralph Neuhäuser, Astrophysical Institut, Friedrich-Schiller-Universität, Schillergässchen 2, 07745 Jena, Germany. Email: wagner.d@uni-jena.de; rne@astro.uni-jena.de

As a Section all our records are deposited in Aberdeen University, however the task of supplying the Jena group with the information they require would be beyond our capabilities. If, as individuals, you would like to contact them directly with your own sightings then they would be most grateful.