BAA members take part in ‘Measure to the Moon’ project

During the early part of this year we were treated to spectacular, monthly evening conjunctions between the planet Venus and a crescent Moon. These beautiful events are known for engaging a wide audience with astronomy. Therefore it was considered a good opportunity for Mayes Creative, under my guidance, to invite people around the world to take part in an experiment to measure the distance between the Earth and Moon. 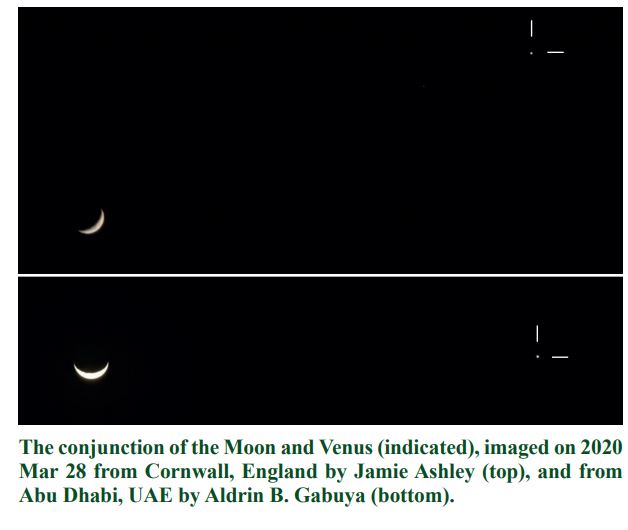 Inspired by the recent 250th anniversary of Captain James Cook’s transit of Venus observations from Tahiti in 1769, the project re-enacted historic methods, where astronomers around the world would time the transit and then parallax was used to measure a distance between the Earth and the Sun. Transits of Venus, in which the planet moves across the face of the Sun when viewed from the Earth, occur in pairs eight years apart; the last two occurred in June of 2004 & 2012 and there is not another for over 100 years. The new experiment would involve people around the world taking part with modern cameras to attempt a similar thing, but this time with the Moon and Venus.

Three dates were chosen between February and April. I invited people to go outside and photograph the conjunction, encouraging them to send time-stamped results via social media. Using the locations provided, I recorded the orientation of the crescent Moon in relation to Venus, as seen from different observing sites. This information was then used to calculate how far away we are from the Moon. I was assisted by Charlie Kennett (Truro and Penwith College) for mathematical analysis, and University of Exeter intern Natalie Kwan.

Over the course of the project, responses came in from the UK, Abu Dhabi, and the Philippines, which helped us get a better idea of the shift in orientation. The best result, due to the number of photos we received from all over the world, came from the March attempt which gave a calculated distance of 340,014km. The Moon at that time was actually 357,122km away so the difference was just 5.03%. Our final event in April was affected by clouds in the UK, but we had a number of US observers taking part including responses from Flagstaff and the eminent astronomer Prof Jay Pasachoff in New York. We also had a great response from BAA members, who we wish to thank.

There were lots of lessons learnt along the way, but we were pretty pleased with the results. We really enjoyed this and may run something similar in the autumn, involving Mars.

This project has been supported by Heritage Lottery Fund, Arts Council England, Feast and Cornwall Council, with special thanks to National Lottery players. For more information, please visit mayescreative.com.