It is well known that two orbiting objects do so around a common centre of gravity, or barycentre. What is less well appreciated is that this forms the basis of a powerful astrophysical binary star research tool which amateurs can make use of as much as their professional colleagues.
Our group used this technique to investigate seven short period (typically 23hrs) eclipsing binary systems. These systems consist of a highly evolved hot sub-dwarf star (sdB) and a main sequence companion. We wanted to see if seemingly periodic variations in the position of the barycentre could be ascribed to the presence of circumbinary objects: planets or brown dwarfs. For readers who want more information our paper has been published in the professional journal Astronomy & Astrophysics[1] and is freely available via the arXiv portal (https://arxiv.org/abs/1711.03749). 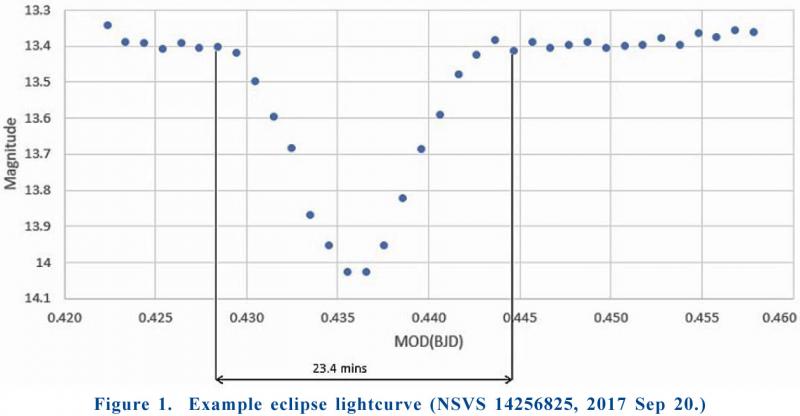 The observations
Observations were made to capture the time of the primary minimum and thus track any variations in the barycentre. All times in Julian Date (JD) have been converted to Barycentric Julian Date (BJD).
As the systems are short-period we found 20 mins either side of the calculated time of minimum (C) sufficed to capture the minimum to within 15 secs. We made some 246 observations on seven systems over a 45-month period. Details of the telescopes used and of the target systems are given in Tables 1 and 2, respectively.
Observations were usually made with the objects at altitudes >40°. The series of approximately 50 FITS images produced were downloaded from the observatory server and reduced using Maxim DL software, and the resulting lightcurve analysed to find the minimum. An example is shown in  Figure 1…. (continued)
(Login or click above to view the full illustrated article in PDF format)