The 2018 Autumn weekend meeting was held on September 7−9 at Christchurch Junior School, Christchurch, Dorset. The Wessex Astronomical Society were our hosts for the weekend. The theme of the meeting was ‘Theories and observations of the Universe’.

On Friday evening BAA President, Callum Potter, and James Fradgley of the Wessex society welcomed all to the meeting.

The talk that evening was given by Dr Chris Pearson of the Rutherford Appleton Laboratory (RAL) on the subject of future projects at RAL Space. He started by describing RAL’s recent operations: they have been involved with some 211 instruments that have flown in space, working at all wavelengths − infrared, microwave, visible, ultraviolet and X-ray. For example they worked with such craft as Herschel in the infrared. Future space missions in this wavelength include the James Webb Space Telescope and SPICA (Space Infrared Telescope for Cosmology and Astrophysics) a joint Japanese/ European mission planned for launch in the early 2030s.

RAL has for a long time had involvement in observing the Sun especially with SOHO. The future is with Solar Orbiter, which is being built with Airbus and due for launch in 2020. Meanwhile spacecraft in Earth orbit don’t just look outwards, but also down at the Earth. The series of Sentinel satellites built at RAL study the Earth’s weather and sea temperatures. Another important future project is ARIEL. With launch in 2028 the craft will look at the spectra of 1000 exoplanets, searching for possible bio-markers.

After a series of questions the President thanked Dr Pearson and the evening was closed.

The next morning, after the registration of attendees James Fradgley began the meeting at 10:00 a.m. with a short summary of the history of the Wessex society. It was formed by amalgamation of two other societies in 1971. Today they have about 100 members and meet in Wimborne. The society owns an observatory in the New Forest with a 14-inch Meade telescope.

James then handed over to Callum Potter to formally open the Association’s 6th Ordinary Meeting of the 128th session. The members present approved the minutes of the last meeting, and elected and welcomed 67 new members. We then were then advised that we have recently received a gift of some £260,000 from the estate of late member Mr Michael Saunders.

Jeremy Shears, Papers Secretary, said that at the last Council meeting the following two papers were accepted for future publication: The brighter comets of 2015 by Jonathan Shanklin and A survey about the Apennine Bench Formation and identification of volcanic features by Raffaello Lena & Barry Fitzgerald. The President then reminded the members that there is still time to vote in the election for next year’s Council, especially making use of the new electronic voting system. He then drew attention to future meetings, especially the Christmas meeting on December 8 to be held in London at the new Institute of Physics lecture theatre. The formal Ordinary Meeting was then closed until October 31 at Burlington House.

The meeting continued up to the mid-morning break by introducing three of the BAA Section Directors, Nick James of the Comet Section; Richard Miles, Asteroids and Remote Planets, now including Exoplanets; and the newly formed Equipment and Techniques Section run by David Arditti. David also told us that he lived in Christchurch as a child and we were currently on the site of his old school. 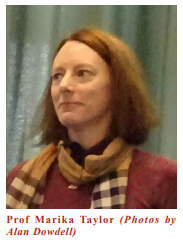 After the break the meeting continued with a talk by Professor Marika Taylor from the University of Southampton about the Theory of the Early Universe.

Prof Taylor began by indicating that we have to accept that we live in a universe that changes over time. We can now describe the history of the universe back to 10−43 seconds after it started. At this time it was a primordial soup of plasma of elementary particles. Cooling of the universe in the next 3 minutes formed protons, neutrons and electrons. At 380,000 years radiation broke free and the microwave background was frozen in time. This was then isotropic and homogeneous; any variations in it were only 1/10 to power of 5K. The resulting universe is believed to consist of 5% normal matter, 26% Dark matter and 69% Dark Energy. So this leads us to ask what are Dark Matter and Dark Energy and what happened before 10−43 seconds?

Einstein’s equations break down at the beginning of the universe, and Stephen Hawking and Roger Penrose showed that the universe started as a singularity, so we need a completely new physics to explain this. It is suggested that Quantum theory may be the way forward. Quantum effects are greater than gravity when closer than 10−35cm and this happened at 10−40 seconds in the universe. Small quantum variations in this early universe are the starting points for the structure of the universe.

Callum Potter thanked Prof Taylor after a few questions from the members. 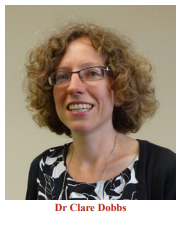 The President then introduced Dr Clare Dobbs from the University of Exeter to speak on ‘Modelling star formation in galaxies’. Spiral galaxies still form stars, unlike elliptical that don’t. They consist of 90% dark matter, 8% stars, 1% gas and 1% dust. Stars form from the gravitation collapse of molecular gas, so to understand this we need to understand the physics of gas. In our galaxy 1 to 4 solar mass of stars are formed per year. This causes a problem as theory shows that about 500 stars per year should be produced, but if this were true, the gas would be used up too quickly. The solution is in a stellar feedback caused by supernovae, and solar wind dispersing the gas. Also magnetic fields in the galaxy stop the collapse of gas.

At Exeter Dr Dobbs uses a supercomputer to model these effects. She illustrated the results of these simulations which could take up to 3 months to run. The results show that star formation is in the order of 1 or so solar masses per year, so they are in the right area. She finished by showing examples of simulations of star formation in the galaxies M51 and M33.

Again after a few questions the President thanked the speaker and adjourned the meeting for lunch. Following the break he introduced Dr Mikako Matsuura from the University of Cardiff, who spoke on ‘Dust and Molecules in Supernovae and Supernova Remnants’. 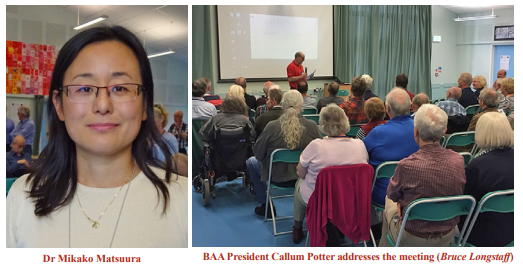 Dr Matsuura said that her talk used data obtained from the Herschel space telescope from 2009−2013, and ALMA which started in 2012. These produced results in the sub-mm and radio wavelengths of the spectrum by looking at 0.01−0.1 micron cosmic dust. The dust comes from supernovae. Images of the 1987A supernova show this dust being thrown off into space. We can measure about 0.5 solar mass of dust from a supernova. The dust is formed from carbon, oxygen and iron with molecules of SiO2 and CO. This starts at a million degrees K and cools to 100K − the dust at this temperature can form clumps and these start the formation of stars. So the Carl Sagan quote ‘we are all star stuff’ is very true.

Thanks were given to Dr Matsuura by Callum Potter, before introducing Professor Ian Jones from the University of Southampton, whose talk was titled ‘Gravity Wave Astronomy’.

This new astronomy started on 2014 February 12 when the LIGO detector recorded gravity waves. The results were published in 2015, 100 years after Einstein published his theory of relativity. Gravity waves are produced by large mass events such as exploding stars, rotating neutron stars and the Big Bang. Joseph Weber first searched for gravity waves in 1960 but failed to detect them.

The first LIGO detector is in Louisiana and another is in Washington State. These detectors are looking at changes of about 10−15m over a length of 4km. The first to be detected was from a colliding black hole event. This was not only the proof of gravity waves but the proof that black holes exist. Since then 5 black holes and a neutron star event have been seen. From the neutron event gamma waves were also detected, which proved that gravity waves travel at the speed of light. In these events the heavy elements are formed including gold. Six more detectors worldwide are planned for the future so more detections are to be expected.

After thanking the speaker, the President then introduced the last speaker of the day, Professor Rob Fender to speak on ‘Black Holes in the Universe’. The Professor is from the University of Oxford Department of Physics.

He started by giving a short overview on the history of black holes. The first to propose these objects was John Michel in 1783, at the same time Pierre Laplace made the same proposals. They predicted that 500 times the mass of the Sun would have an escape velocity greater than the speed of light. John Wheeler in 1967 introduced the term ‘black hole’. Black holes range in size from 3 times the mass of the Sun to 3 billion times. In the universe they are found in the centre of all galaxies. These objects in classical physics are known as a singularity and have mass, spin and a charge.

We observe jets from these objects, which were first seen in 1918 in M87 by Curtis. These would appear to be able to regulate the size of galaxy by pushing energy away via the jets and stopping star formation. In stellar-mass black holes, i.e. 5 to 20 times solar mass, the event horizon is only a few tens of km in diameter. Black holes are surrounded by accretion discs where the mass of matter is being transferred, these discs are at a temperature of over 4000K. When the discs start transferring matter into the black hole, the temperature rises up to 108K. When this happens the jet emits X-rays and forms ‘blobs’ in the jets. When the jet stops the X-rays stop and the disc cools to a mere 107K. 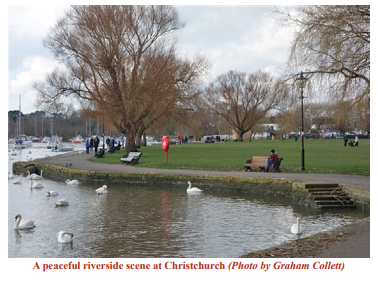 Prof Fender finished by commenting that in our galaxy there are some 100 million black holes so in the known universe there must be say 1019 of these objects.

The speaker was thanked after an interesting session of questions, ending a fascinating day of talks.

It was then time for the raffle to be drawn − these raffles help to reduce costs for the event. Callum Potter thanked all the speakers again and also thanked those who made the weekend happen: Bruce and James and Wessex Astronomical Society, Andrew Hewitt and the Christchurch Junior School for the venue, Ian, Hanna and Kate for the catering, Ann and David for the BAA sales, and of course Maddy and Julia who do all the work in the BAA office. And finally Hazel Collett and Graham for organising the weekend.

The next day for those who stayed over there was a two-hour walking tour of old Christchurch led by David Arditti. This was a very interesting and well organised tour, and after lunch there was a private visit to the Priory with a climb up the tower to complete the highly successful weekend.