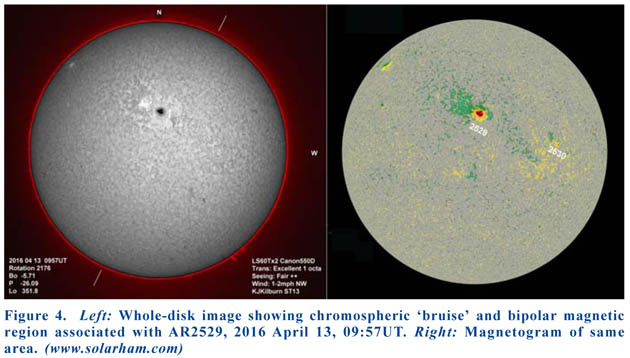 Bipolar magnetic regions (BMRs) are the underlying cause of all photospheric and chromospheric solar activity including active sunspot regions, white light faculae and disturbances in the solar granulation. For the purposes of this paper they are especially associated with features best seen in the wavelength of Calcium K or Hydrogen-alpha; plage, filaments and prominences and solar flares. Yet, despite their importance, specific reference to the observation of BMRs in amateur literature on solar astronomy published in the past twenty years and in JBAA solar reports, until very recently, is scarce or entirely absent; even more advanced recent works on solar astrophysics studied by the present author don’t mention them by name.
To get a fuller understanding of these regions, it is necessary to refer to observations published over half a century ago.

Historical observations
Bipolar magnetic regions were eloquently described by Horace W. Babcock and his son Harold over half a century ago, based on observations made with a solar magnetograph of their own design for measuring weak magnetic fields on the surface of the Sun, using the 150-foot solar telescope and 75-foot spectrograph at the Hale Solar Observatory, Mount Wilson, in the early 1950s. They showed that a poloidal, north-south trending, shallow, sub-surface magnetic field during the course of a 22-year magnetic or an approximately 11-year visible sunspot cycle, described in 1843 by Samuel Heinrich Schwabe, would become wound-up by differential rotation at different solar latitudes into toroidal, predominantly east-west trending magnetic field lines. In turn these would cause increasingly buoyant magnetic loops to break through the solar surface as the wind-up tightened, after roughly three years from the start of the previously relaxed magnetic cycle. Sunspots would then begin to form in active regions caused by the breakthrough of magnetic loops or ‘stitches’…(continued)