Bright features on Neptune in 2015 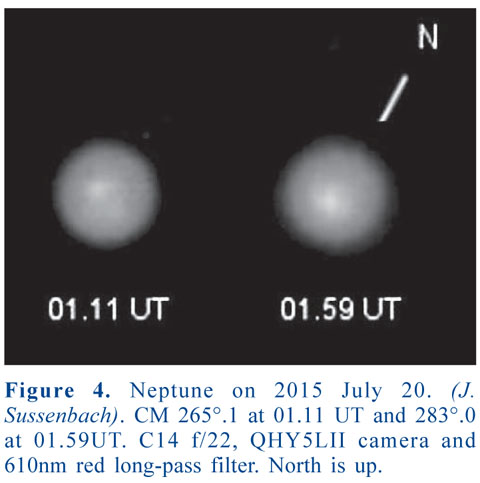 Since the demotion of Pluto to the status of a dwarf planet, Neptune is the outermost planet in the Solar System. The discovery history of this planet was, and remains, a very special story. It started with the mathematical analysis by Urbain Le Verrier of deviations from predictions of the celestial course of Uranus at the Paris Observatory in the first half of the 19th century (Figure 1). He carried out calculations in order to identify an unknown planet, which was thought to cause these disturbances. On 1846 September 23 these calculations led to the discovery of the planet Neptune by Galle & d’Arrest at the Berlin Observatory, about one degree from the position predicted by Le Verrier. Later it turned out that at the same time in the UK John Adams had also calculated the position of the unknown planet close to Neptune’s actual position.
For amateurs Neptune is a difficult object to study because of its small diameter of about 2.4 arcseconds. Even at the highest magnifications Neptune remains a tiny blueish disk with no detail. You need a telescope with a large aperture to visually observe the disk of the planet, but detection of its large satellite Triton is relatively easy in medium-sized telescopes due to its brightness at magnitude +13.5. Also for astrophotographers recording Neptune and Triton is a challenge (Figure 2). In general, no details on Neptune are visible, except that the southern hemisphere is sometimes slightly brighter than the northern, as several amateurs have shown.
The visit of Voyager 2 in 1989 brought a major breakthrough in our understanding of Neptune. The spacecraft discovered dark and bright storms on the planet, which are sometimes very stable. It also became clear that there are very rapid atmospheric motions. In the equatorial zone atmospheric streams rage continuously at a speed of 1,200 km/h or more and the rotation period decreases towards the pole.
On 2015 July 13 Ricardo Hueso Alonso and colleagues (Escuela Técnica Superior de Ingeniería in Bilbao, Spain) discovered a bright spot on Neptune at latitude -41° with the 2.2 metre telescope of the Calar Alto Observatory.1,2 Later, some other bright spots were also detected.3 He asked amateur astronomers around the globe whether they could detect these features with their telescopes. There had been some amateur observations of features on Neptune in 2013-2014, but the number of observations was few. Although the atmosphere in The Netherlands is often very turbulent two of us (Kivits and Sussenbach) accepted the challenge to detect the feature at latitude -41°….(continued)
(Login or click above to view the full illustrated article in PDF format)