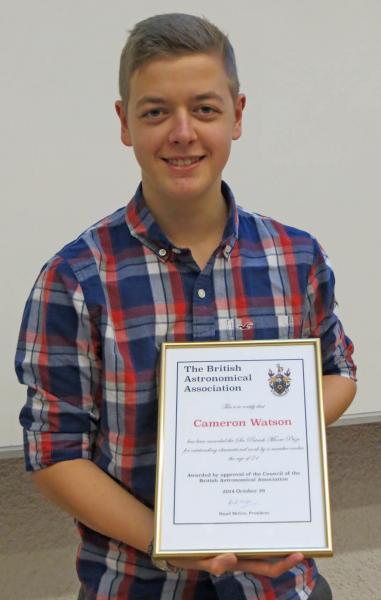 The Sir Patrick Moore Prize consists of £250 and a certificate, and may be awarded to a member, members or affiliated group for one of the following areas of activity, all of which were close to Sir Patrick’s heart:
1. The encouragement of a public interest in astronomy;
2. A contribution to the understanding of the history of astronomy;
3. Outstanding observational work by a member or members under 21 years of age;
4. The encouragement of participation in observational astronomy by youngsters;
5. The carrying-out of a collaborative research project, whether between amateurs only, or also involving professional astronomers.
The Prize was first awarded in 2013 to 18-year old planetary imager Dennis Put, and in 2014 the Prize Committee once again decided to recognise the efforts of one of our youngest imagers, 16-year old Cameron Watson.
Cameron’s interest in astronomy was sparked by a smart phone app, and he joined his local society, the Coventry and Warwickshire Astronomical Society, first gaining experience in observing the Perseid meteors. He then obtained several telescopes and started to develop his expertise in taking deep sky images. The local society sponsored his membership of the BAA for a year, and he has been submitting images to the Deep Sky Section, which has featured some in its Newsletter, at the same time as studying for his GCSEs and working part-time to earn the money to buy equipment.
Geoffrey Johnstone and Mike Frost, proposing Cameron for the Prize, described him as having the energy, intelligence, and commitment needed for a great future in astronomy, or any other field he chooses. He was presented with the Prize at the Christmas Meeting at University College London by the Astronomer Royal, Prof Lord Martin Rees.
David Arditti, (Chair, Sir Patrick Moore Prize Committee)