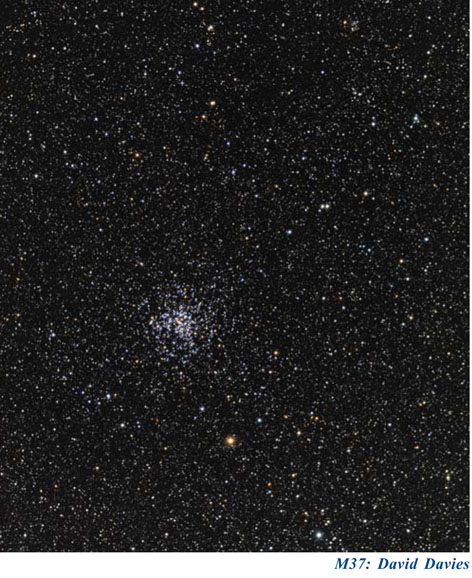 Auriga, the Charioteer, is an excellent constellation riding high in the December sky. A nice easy asterism, a pentagon, with bright Capella at the apex. Capella is the 6th brightest star in the night sky with an apparent magnitude of 0.08 (near enough to zero to make no difference) with a name meaning ‘The Little Goat’. Auriga is in the winter Milky Way, so should be a good hunting ground for clusters and nebulae, but less good for distant galaxies.
The three standout deep sky objects are the Messier open clusters M36, M37 and M38. If you are new to astronomy and just starting out, these are excellent objects to observe, but you might have some difficulty telling them apart. The solution to this is to be systematic when observing. All are fairly straightforw 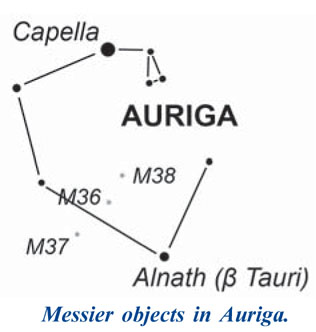 ard in binoculars or a small telescope, but don’t start out with a high power eyepiece.
M37 is fairly easy to find first, being east of the ‘line’ joining Beta Tauri with Theta Aurigae – about half way between these two stars, and a couple of degrees east will land you on M37. Head back westwards towards the line between Beta and Theta, and then on another couple of degrees should bring you to M36. And then on again in the same direction and you should alight on M38. All these clusters are pretty bright – if you have good eyesight and a dark sky location you can probably pick out M38 with the naked eye, and possibly M37 too, though it may be at the limit. M36 is a bit fainter, but binoculars will show it without difficulty. Small telescopes will show lots of stars, making these fine jewels in the night sky.
But Auriga has its challenges too. IC 410 is an emission nebula surrounding the open cluster NGC 1893. The open cluster should be fairly easy to spot visually with a telescope, but the nebulosity may be less so. It should not be too hard for imagers though. And nearby is IC 405, the Flaming Star Nebula, which surrounds and is illuminated by the star AE Aurigae. IC 405 is another tricky object for the visual observer, but can be readily imaged. If observing visually some sort of high contrast nebula filter may be useful – either a UHC or possibly an OIII; try both if you have both.
In 1959 Stewart Sharpless of the US Naval Observatory published a catalogue of 313 HII regions, some of which are diffuse nebulae, supernova remnants, and planetary nebulae – these are mostly faint, but they can vary hugely in size. Auriga is well served with twenty targets, many of which should be available to imagers and a few might be possible for the visual observer with a large telescope. There is duplication with other catalogues, for example IC 405 above is SH2-229, and IC 410 is SH2-236. But other ‘bright’ objects to observe include SH2-230 and SH2-235. Fainter objects include SH2-224 (a supernova remnant), SH2-226 and SH2-228. If you would like to find out more about the Sharpless catalogue and objects, good resources on the Web are at www.sharplesscatalog.com and galaxymap.org/cat/list/sharpless/1. Sharpless’ paper can also be downloaded or consulted: ‘A Catalogue of H II Regions’, Sharpless, Stewart, Astrophys.Jnl Supp., vol. 4, p.257 (1959).