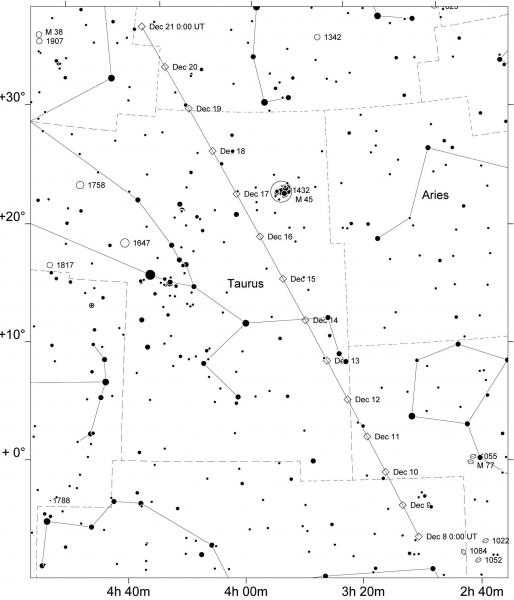 Comet 46P was discovered in 1948 January by Carl Wirtanen using the 0.5m Carnegie Double Astrograph at Lick Observatory, California. The comet belongs to the Jupiter family and currently moves in an orbit with a period of 5.4 years. The return in 2018 is particularly good with the comet passing 11.6 million km from the Earth on December 16, just 4 days after perihelion.

A chart showing the comet’s position in December is given here. At the time of writing in early November the comet was too far south for observation from the UK but images taken using remote telescopes in the southern hemisphere (see below) show the diffuse, greenish coma with a growing tail to the north. It should become visible to UK observers early in December low ab 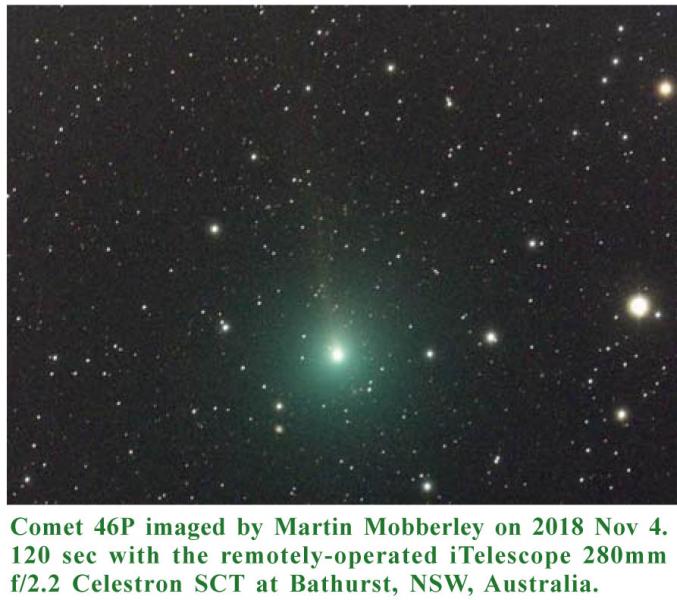 ove the southern horizon at around 10pm, and it could be around 6th magnitude at this time. The comet rapidly ascends into the winter evening sky moving into Taurus on Dec 12.

Comet magnitudes are notoriously hard to predict but we expect 46P to reach around mag 4 at closest approach. On that date it will be high up in Taurus not far from M45 and it will be moving rapidly relative to the stars at 0.2°/hr. Despite its fairly bright magnitude the comet will probably be more than 1° in apparent diameter, so it may not be an easy object from most sites. Binoculars will be an ideal instrument to follow it visually through December and colour imaging with wide-field telescopes should show it well.

Visual magnitude estimates should be made using the techniques set out in the Section Observing Guide which is available on the Comet Section website. During December the comet will be an ideal target for imagers using wide-field cameras. Even a simple DSLR on a fixed tripod with a standard lens should be able to pick up the green fuzzy glow as the comet races past M45 in the middle of December. Let’s hope for clear skies around the time of closest approach.