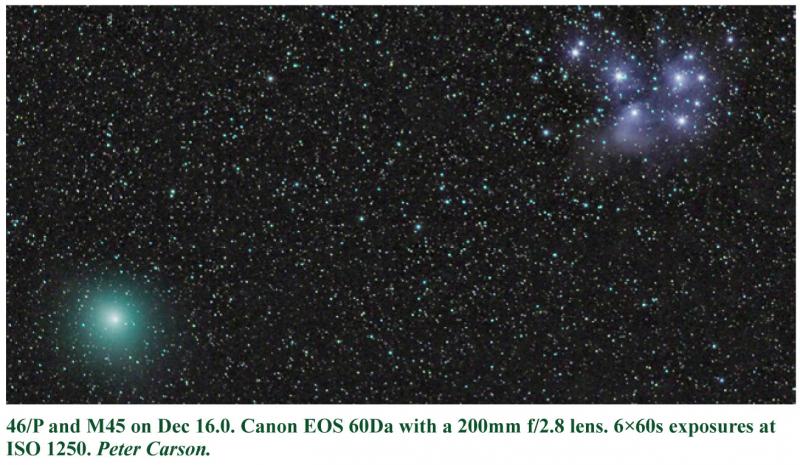 As expected, when the weather cooperated, comet 46P/Wirtanen put on a good show for northern hemisphere observers throughout 2018 December as it raced northwards through Taurus and Auriga, ending the year as a circumpolar object in Lynx.

At its peak in mid-December the comet was around fourth magnitude (Figure 1), but the coma diameter was huge. Observers at dark sky sites reported coma diameters well in excess of 1°. This meant that the comet was actually quite difficult to find, since it was equivalent to the light of a fourth magnitude star spread over an apparent area several times that of the Moon. From my light-polluted back garden in Chelmsford it was visible in 11×80 binoculars, but hard to pick up due to the low contrast. On Dec 10 both Peter Carson (Dengie, Essex) and Andrew Robertson (near Beccles, Suffolk) reported it visible to the naked eye as a hazy patch not far from the second magnitude star α (alpha) Ceti. Andrew noted that his best views were in 28×110 binoculars, with which he saw the slightly asymmetrical coma extending to almost a degree in diameter.

A number of observers obtained spectra when the comet was at its brightest. Robin Leadbeater obtained a spectrum on the evening of Dec 9. The raw image (Figure 2) shows wavelength along the horizontal dimension and angular distance along the vertical dimension. The fuzzy horizontal line is solar reflection, from dust close to the nucleus. Further out there are the emission lines from ionised gas (along with lines caused by the Earth’s atmosphere and light pollution). A calibrated spectrum from David Boyd (Figure 3) shows the strong Swan band emission in the green, which is due to various carbon species.

Images taken through December show the comet dominated by the green Swan band emission from the spherical gas coma (Figure 4). A very faint ion tail and dust tail were also visible in deep images; these could be seen in the inner coma using rotational gradient processing (Figure 5). The comet passed the Pleiades open cluster (M45) on Dec 16/17 and numerous images were received by the Section. The two figures at the top of this article show the comet as it passed the famous deep sky object.

The comet is now fading as it moves away from the Sun and Earth. In mid-February it will be moving slowly south in Ursa Major and we expect that it will have faded to 10th magnitude. Even so, it is still one of the brighter comets around and is worth observing as it fades back to obscurity.