These predictions focus on comets that are likely to be within range of visual observers. Members are encouraged to make visual magnitude estimates, particularly of periodic comets, as long term monitoring over many returns helps to understand their evolution. Guidance on visual observation and how to submit estimates is given in the BAA Observing Guide to Comets. Drawings are also useful, as the human eye can often discern features that initially elude electronic devices.

Theories on the structure of comets suggest that any comet could fragment at any time, so it is worth keeping an eye on some of the fainter comets, which are often ignored. They would make useful targets for observers using electronic imaging, especially those with time on instruments such as the Faulkes telescopes. Such observers are enco 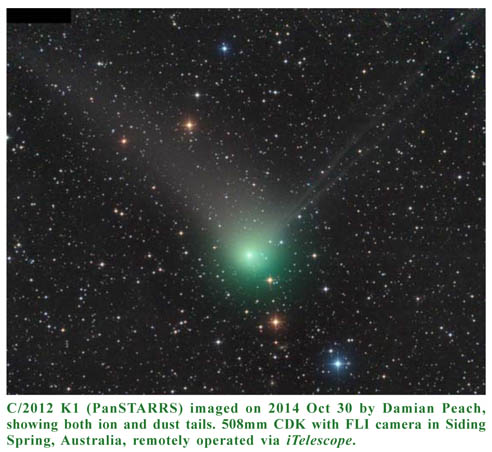 uraged to report total magnitude estimates, using the ICQ format given in the BAA Guide and the reduction techniques described by Roger Dymock. When possible use a waveband approximating to Visual or V magnitudes. Such estimates can be used to extend the visual lightcurves, and hence derive more accurate absolute magnitudes.

In addition to those in the BAA Handbook, ephemerides for new and currently observable comets are published in the Circulars, and on the Section, CBAT and Seiichi Yoshida’s web pages. Complete ephemerides and magnitude parameters for all comets predicted to be brighter than about mag 21 are given in the International Comet Quarterly Handbook; details of subscription to the ICQ are available on the Internet. The BAA Observing Guide to Comets is available from the BAA Office, and images of these comets are in the BAA/TA comet image archive at http://www.britastro.org/cometobs/, which is regularly updated with the latest images and drawings.

15P/Finlay is at perihelion in 2014 December, and may begin the new year as a binocular object in the early evening sky. It quickly fades in January and February, but remains conveniently placed.

29P/Schwassmann-Wachmann is an annual comet that has outbursts, which over the last decade seem to have become more frequent. In early 2010 the comet had one of its strongest outbursts yet recorded. Richard Miles has developed a theory that suggests that these outbursts are in fact periodic, and arise from at least four independent active areas on the slowly rotating nucleus. The eruptions of the active areas evolve with time. The comet is an ideal target for those equipped with CCDs and it should be observed at every opportunity…. (continued)