Unless some bright long-period comets are discovered it promises to be a disappointing year for comet enthusiasts. 67P/Churyumov–Gerasimenko could be the only one of the returning periodic comets that receives any attention from European visual observers. 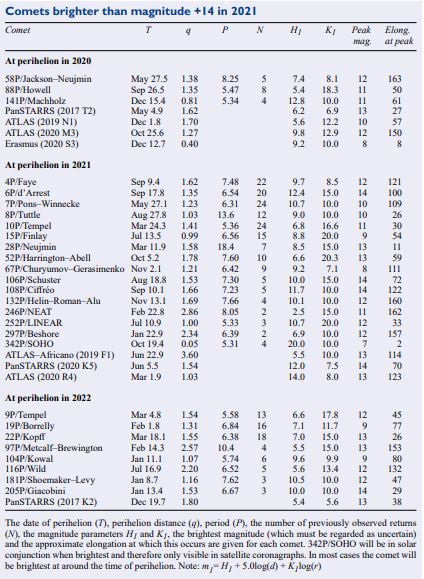 These predictions focus on comets that are likely to be within range of visual observers, though comets often do not behave as expected and can spring surprises. Members are encouraged to make visual magnitude estimates, particularly of periodic comets, as long-term monitoring over many returns helps in understanding their evolution. Please submit your magnitude estimates in ICQ format. Guidance on visual observation and how to submit estimates is given in the BAA Observing Guide to Comets. Drawings are also useful, as the human eye can sometimes discern features that initially elude electronic devices.

Theories on the structure of comets suggest that any comet could fragment at any time, so it is worth keeping an eye on some of the fainter comets, which are often ignored. They would make useful targets for those making electronic observations, especially those with time on instruments such as the Faulkes telescopes. Such observers are encouraged to report electronic visual equivalent magnitude estimates via COBS. When possible use a waveband approximating to Visual or V magnitudes. These estimates can be used to extend the visual light curves, and hence derive more accurate absolute magnitudes. Such observations of periodic comets are particularly valuable as observations over many returns allow investigation into the evolution of comets.

In addition to the information in the BAA Handbook and on the Comet Section web pages, ephemerides for new and currently observable comets are on the web pages of JPL, CBAT and Seiichi Yoshida. The BAA Observing Guide to Comets is available on the Section web page.

7P/Pons–Winnecke was discovered by Jean-Louis Pons with a 0.12m refractor at Marseille in 1819, but was then lost until rediscovered by Friedrich August Theodor Winnecke with a 0.11m refractor in Bonn in 1858. He demonstrated the identity and recovered the comet in 1869. The perihelion distance has slowly been increasing since the early 1800s. It can make close approaches to the Earth and did so in 1927 (0.04au), 1939 (0.11), 1892 (0.12), 1819 (0.13) and 1921 (0.14). The 2021 return produces a relatively close approach at 0.44au, but this is not sufficient to make the comet a bright object. An outburst of the meteor shower associated with the comet, the June Boötids, occurred on 1998 Jun 27.6, with another lesser display in 2004. The comet should be in telescopic range by April, but it is a morning object and UK observers will lose it by the end of May. When brightest at 10th magnitude in early June it will be best seen from the southern hemisphere. 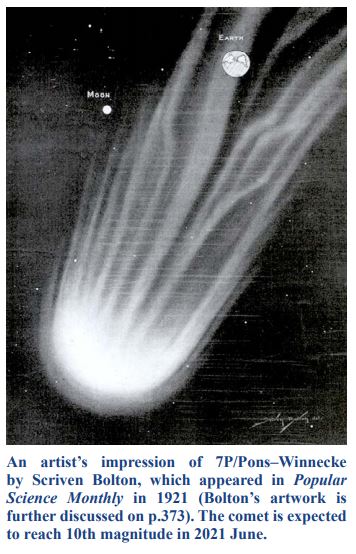 8P/Tuttle has a rather poor apparition. Southern hemisphere observers stand the best chance of seeing it, but only after perihelion when it is fading at around 11th magnitude.

15P/Finlay might reach 9th magnitude, but it won’t be observable from the UK until it is past its brightest, and then only in the morning sky. William Henry Finlay discovered the comet from the Cape Observatory on 1886 Sep 26, with an 18cm refractor. It was around 11th magnitude at this and the following return. In 1906 it passed 0.3au from the Earth and reached 6th magnitude. Jupiter perturbations in 1910 gave an unfavourable return in 1913, but a good one in 1919; the returns were unfavourable after that until 1953, when the comet was recovered. It has been observed at every return since 1953. It is an intrinsically faint object and there are usually few visual observations. A September perihelion would give favourable observing circumstances, under which the comet could reach 5th magnitude, but this won’t occur until 2034.

29P/Schwassmann–Wachmann is an annual comet that has outbursts, which over the last few decades seem to have become more frequent, though this could just reflect more intense coverage. Richard Miles has developed a theory suggesting that these outbursts are in fact periodic, and arise from at least four independent active areas on the slowly rotating nucleus. The activity of these areas evolves with time. The comet is an ideal target for electronic observations and it should be observed at every opportunity. It is in solar conjunction in March and at opposition in October. The comet has moved into the northern celestial hemisphere, and should be adequately placed for observation from the UK in the second half of the year.

67P/Churyumov–Gerasimenko is well known from the investigations of the Rosetta spacecraft, but it could still spring surprises. The comet could reach 8th magnitude during its closest observed perihelion passage, when it also comes relatively close to the Earth. Analysis of previous apparitions suggests that the absolute magnitude is brighter when the comet is closer to the Sun at perihelion, as it is this year. It will be best seen in the morning sky, but is relatively well placed in the latter part of the year. From the autumn onwards it may be visible in large binoculars in the late evening.

The other periodic and parabolic comets that are at perihelion during 2021 are unlikely to become brighter than 11th magnitude, or are poorly placed. Ephemerides for these can be found on the Central Bureau for Astronomical Telegrams (CBAT) or other web pages. Several D/ (destroyed or disappeared) comets have predictions for a return, though searches at favourable returns in the intervening period have failed to reveal them and the orbits will have been perturbed by Jupiter. There is however always a chance that they will be rediscovered accidentally by one of the sky survey patrols.

Looking ahead to 2022, six comets may reach 9th magnitude, though not all are that well placed for observation. 19P/Borrelly will be an evening object when brightest in 2022 January. 45P/Honda–Mrkos–Pajdušáková will be too close to the Sun for observation. 67P/Churyumov–Gerasimenko should still be visible after its 2021 return. 81P/Wild will be an early morning object. 104P/Kowal will be another evening object at the start of the year, but may be large and diffuse. 255P/Levy might be observed from more southerly latitudes prior to perihelion. We can hope that we will we get another surprise comet like C/2020 F3 (NEOWISE)!

With more and more discoveries of periodic comets being made, the number of expected returns increases every year. A full list of returning comets is published as supplementary material online, but here only those comets expected to be brighter than 14th magnitude during the year are listed.