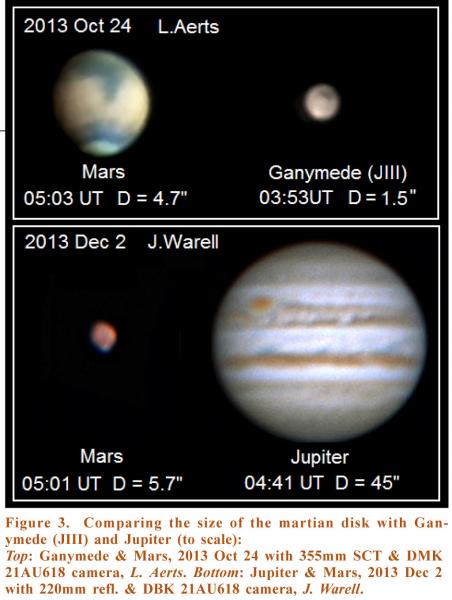 The close conjunction of Mars with Jupiter in the morning sky on January 07 was seen by many observers. After experiencing two successive cloudy mornings at dawn in Northamptonshire, the writer succeeded with clear skies on 2018 Jan 7 and 8, the former being the date of closest approach (15 arcminutes). Telescopic wide field images by Dave Eagle and Damian Peach are also given here (Figure 2). Several wide angle sky images and drawings by other observers have been posted at the BAA website. On Jan 16 after several further cloudy mornings I found the two planets almost a whole 10×50 binocular field apart. 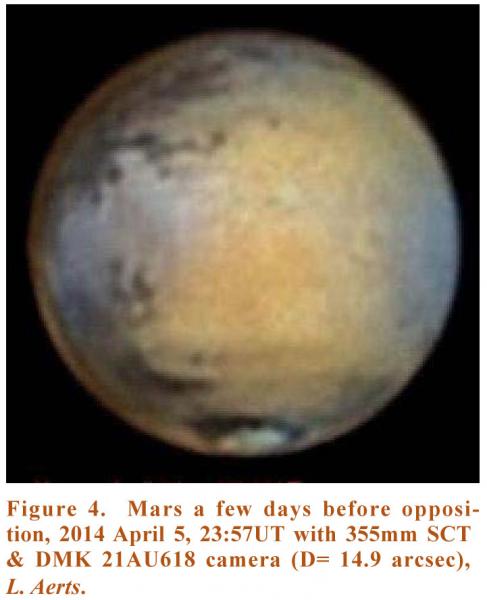 On Jan 7 Jupiter’s disk measured 33 arcseconds in diameter, but Mars was a fraction below 5 arcseconds. That Mars is a challenging planet to observe when distant is only too well known, and comparison images made by Leo Aerts and Johan Warell months before opposition nicely put the matter into perspective (Figure 3). One pair of images compares Mars and Jupiter at the same scale, while the other compares Mars with the even more diminutive disk of Ganymede (JIII), Jupiter’s largest moon, and itself larger than Mercury.

When we are well-placed to observe Mars, spectacular results can be expected (Figure 4). Opposition will occur on July 27 this year.