Covering the June 3 occultation by 2014MU69 from Bloemfontein, South Africa 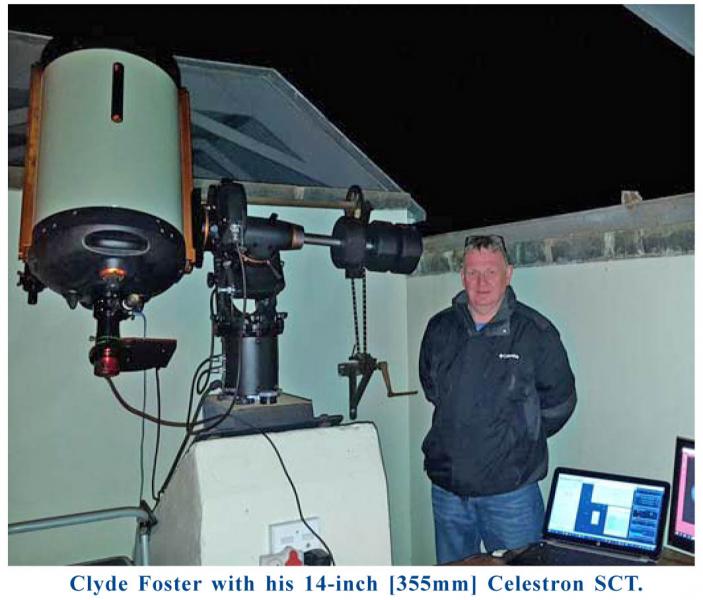 On 2017 June 3, the Kuiper Belt Object (KBO) 2014MU69 [now numbered (486958) 2014 MU69] was expected to occult a 15th magnitude star in Sagittarius. The projected narrow shadow path extended across the South American and South African regions. This KBO, estimated to be 25-45km in size, is the next objective of the NASA New Horizons spacecraft, which will perform the flyby on 2019 January 1. Two further occultations are expected to occur this year (on July 10 & July 17), and these three events provide a rare opportunity to obtain further valuable information about this small, faint (mag 27) object. 2014MU69 was discovered, and has only once been detected directly, by the Hubble Space Telescope.
The June 3 event would subsequently be described by NASA as ‘the most technically-challenging and complex stellar occultation observing campaign ever attempted’.

I was rather surprised, but nonetheless delighted, to receive an invitation from the South African Astronomical Observatory (SAAO) to support them in a pro-am collaboration effort to monitor the occultation in support of the NASA New Horizons team. Several international teams were being deployed, using 16″ [40cm] Skywatcher Dobsonians in both South America and South Africa in order to set up an observing grid covering the shadow path. My home location in Centurion, Gauteng was well north of the projected path, so it was agreed with SAAO that I should consider relocation of my Celestron 14″ [35cm] Edge HD SCT and auxiliary equipment to Bloemfontein, and more specifically the Boyden Observatory just northeast of the city. Although outside the high probability path, it was still possible, due to the limited information about the KBO, that the occultation may be detected. Even a good ‘no-detection’ result could still provide valuable information.

Having visited the Boyden Observatory a number of times over the last few years, it was an excellent opportunity to build further on my relationship with the observatory and the Physics/Astrophysics department of the University of the Free State (UFS), who are responsible for the maintenance and operation of the facility. One of the historic small observatory buildings and onsite accommodation was kindly allocated for my use over the period I would be there.

Boyden Observatory was set up in South Africa in 1927, when Harvard College Observatory of the USA took the decision to relocate its Boyden station, at that stage based in Arequipa, Peru. It has gone through various ownership changes, and challenges, over the years, but I am pleased to say has survived as an important South African astronomical heritage site and is still used as a present-day research facility. Some of its most famous and historic instruments are the Boyden 60″ reflector (previously the Rockefeller), the 13″ Boyden refractor and the 10″ Metcalf refractor. The more modern 16″ Watcher robotic scope is managed by University College Dublin. The Observatory also houses an amazing library, containing a broad collection of fascinating and valuable historical documents and books, as well as various exhibits.

Some tests were undertaken from my home observatory in preparation, but, given the local urban sky conditions, it was evident that it would be a very challenging exercise. Given the expected duration of the occultation of less than 2 seconds, exposures of 0.5s, with a minimum s/n ratio of 5-10 were key requirements. Binning (2´2) with my ZWO ASI290MM camera, combined with a focal reducer, were important factors. During this period of testing and self-study, I was ably supported by input and advice from Tim Haymes of the BAA1 as well as Anja Genade of the SAAO. The relocation took place on Wednesday prior to the occultation, allowing three days and nights to set up and resolve any last minute issues, where I was grateful for the assistance and support of the UFS Physics/Astrophysics department.

The target field was acquired a few hours before the occultation, and I was delighted to note that the target star was easily detected. With a projected occultation time of close to 03:10UT, data were captured at 2fps from 02:47UT to 03:32UT. 4.6Gb of data in 5457 frames were recorded in FITS format. Initial indication is that the data were of sufficiently good quality (s/n), and are currently being analysed by SAAO, and it will be interesting to see the consolidated results from all observers. For myself personally, it was a huge learning curve but an exciting and rewarding experience. The latest NASA press releases indicate that good data were obtained from many of the observing teams, both in South America and South Africa, although it appears that no positive detections were observed, leading to the conclusion that 2014MU69 may be smaller than originally estimated.

My sincere appreciation to Prof Matie Hoffman and Dawie van Jaarsveld of Boyden Observatory and the UFS Physics/Astrophysics, Anja Genade and Dr Amanda Sickafoose of SAAO, and Tim Haymes of the BAA.