At 07:58 UTC on 2013 December 19 a very bright meteor was observed over the UK. Reports, mostly by visual observers, soon started to appear on Twitter and on various forums and websites. Most meteor cameras across the UK had by this time shut down due to the imminent sunrise but NEMETODE cameras operated by BAA Meteor Section members Alex Pratt in Leeds & William Stewart in Ravensmoor were still operating and captured the early stages of the event. Alex’s camera commenced automatic shutdown just 71 seconds after the meteor occurred! 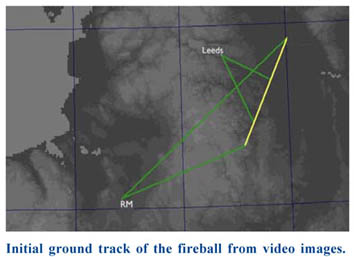 Dual station analysis indicates that this event was a sporadic meteor. A still image from  Ravensmoor and the initial ground track of the object are shown here. Note that the Ravensmoor camera has been rotated clockwise through 90° within its housing in order to minimise local overlap, and so what appears to be the bottom of the field of view is actually the left-hand side. Videos of the event are available at www.nemetode.org.
The meteor was continuing to brighten as it exited the field of view of both cameras and hence the maximum magnitude achieved and the extent to which the meteor continued beyond the end of the displayed ground track cannot be determined from the videos. The visual reports suggest that it was sufficiently bright to be classed as a fireball while some reports suggest that it was still visible as it passed over the coastline and out into the North Sea.
Any witnesses who have not yet submitted their observation of this event are strongly encouraged to do so to the Section’s Fireball Co-ordinator Leonard Entwisle at len.entwisle@ btinternet.com or to meteor@britastro.org.
Of particular interest will be the observer’s location, the compass direction at which the meteor faded to invisibility, the height above the horizon at which it became invisible and an estimate of the maximum brightness of the meteor in comparison to, for example, the Moon or Venus. While the videos provide good information relating to the start of the meteor trail, visual reports will be essential in determining the maximum brightness and whether or not the object did indeed pass over the coast and out to sea.
The Meteor Section’s NEMETODE video meteor detection group (see www. nemetode.org) underwent a significant expansion in early December. Alex Pratt deployed a second camera from his location in Leeds, while three additional observers joined the group: David Anderson (Low Craighead, South Ayrshire), Mike Foylan (Rathmoylan, Co. Meath) and Michael O’Connell (Monasterevin, Co. Kildare), each contributing one camera. These augmentations to the existing network bring the total number of operational cameras up to eight and represent a very significant increase in capability.
All the cameras belong to the highly sensitive Watec 902 series and in most cases the lenses in use are in the focal length range 6mm to 12mm with focal ratios of f/0.8 or better. This not only ensures that NEMETODE will be able to detect faint meteors but also that we will be able to determine their position on the sky more accurately. The new additions have been aligned to give extensive coverage over the northern part of the Irish Sea.