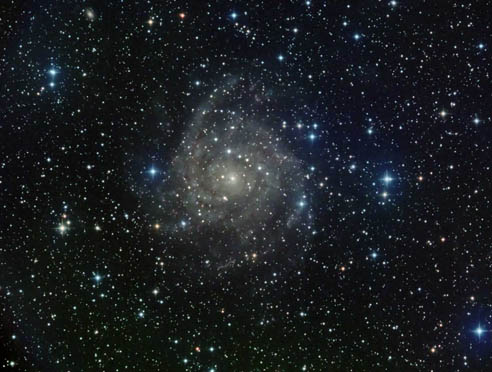 With all the lovely deep sky objects to observe in the south, for example in Orion, it might seem perverse to suggest it would be interesting to swing your telescope to the north and look to one of the less remarkable constellations: Camelopardalis, the Giraffe. Situated between Perseus and Polaris, it rides high in the sky at this time of year, and there are a good number of interesting and under-observed objects there.

Let’s start with a couple that are perhaps observed more often, and the first of these is perhaps not a deep sky object by any traditional definition. Kemble’s Cascade, a line of stars, makes a very nice asterism that is probably best observed with binoculars. Of course this is an asterism only, and a line-of-sight effect only. The open cluster NGC 1502 lies at one end of the Cascade, and Lucian Kemble was looking for this cluster when he noticed this striking asterism.

Not far from NGC 1502 and the Cascade lies NGC 1501, a planetary nebula – this is rather faint but should be visible with a 20cm telescope as a faint disk, and should be fairly easy for imagers.

But perhaps the most interesting objects in Camelopardalis are several galaxies. Two are particularly bright. NGC 2403 is an 8th magnitude spiral galaxy seen almost face-on. It is a member of the M81 group of galaxies and lies about 12 million light years away. Patrick Moore included it as no. 7 in his Caldwell Catalogue. Camelopardalis has another Caldwell object – Caldwell 5, which is also known as IC 342. This is another splendid face-on spiral galaxy of around 9th magnitude and lies about 10 million light years away. IC 342 is a bit bigger on the sky than NGC 2403, being about 21 arcminutes in diameter. NGC 2403 is a little smaller and more elongated at around 18´11 arcmin.

Although these are the two brightest galaxies, there are a few more to look at; NGC 2655, NGC 1569 and NGC 2336. NGC 2655 had a bright supernova, SN 2011B, in 2011, which was well observed by our members. NGC 1569 is a dwarf irregular galaxy and relatively unobserved. NGC 2336 is another face-on spiral. Inspection of the New General Catalogue will reveal many more galaxies, which will be a challenge for the visual observer and imagers.

Image of IC342 by David Davies