Delving into the Dragon 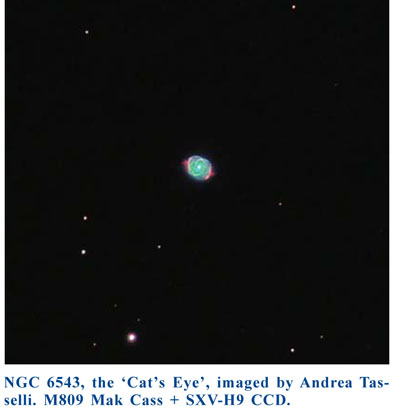 When setting up an observatory, there is common wisdom that it should be oriented to give a good view to the south, with a good horizon east or west being a bonus, and for roll-off roof observatories, the roof should roll to the north, as there is ‘nothing worth observing’ there. Whilst it would be nice to have an all-round horizon, for most there will be practical restrictions that cannot be circumvented, but I think you should make best use of what you have. And indeed even if the horizons are limited, there will be no lack of things to view. However, the idea that there is ‘nothing in the North’ is placing an unfair limitation – there are plenty of objects to see, and cutting off the circumpolar constellations is a bad idea.

My attention this time turns to the constellation Draco. It is another of these rather large and indistinct rambling constellations, that can be quite hard to pick out. The lack of bright stars makes finding your way around tricky, and you might think there is not much there to make it worthwhile. But on inspecting a good star atlas (such as the Interstellarum Deep Sky Atlas) a huge number of targets will be revealed, many of which are rather under-observed.

Perhaps the standout object of the constellation is the planetary nebula NGC 6543, the ‘Catseye’. It is quite bright with a visual magnitude of around +8.1, and the core seems to be about 20 arcseconds diameter, though its outer shells stretch to around 5.8 arcminutes. Interestingly the nebula lies almost exactly at the north ecliptic pole – just a chance alignment, of course. There are not many good images of NGC 6543 in the Deep Sky Section archives so more observations would be appreciated. Its small size make it a challenge for imagers, but it can be done as shown in this lovely image by Andrea Tasselli.

When exploring Draco in an atlas, I came across the nice asterism Kemble 2. Many will be familiar with Kemble’s Cascade in Camelopardalis (the topic of an excellent article by Stewart Moore on the BAA website in November last year, ‘A celestial waterfall for binoculars’), but you might not be so aware of other asterisms that Kemble noticed. Kemble 2 is also known as ‘Little Cassiopeia’, as it bears a striking resemblance to the ‘W’ of her big sister. It lies not far from Chi (c) Draconis, and will be easily noticed in binoculars. Kemble’s third ‘famous’ asterism is Kemble’s Kite which lies in Cassiopeia. 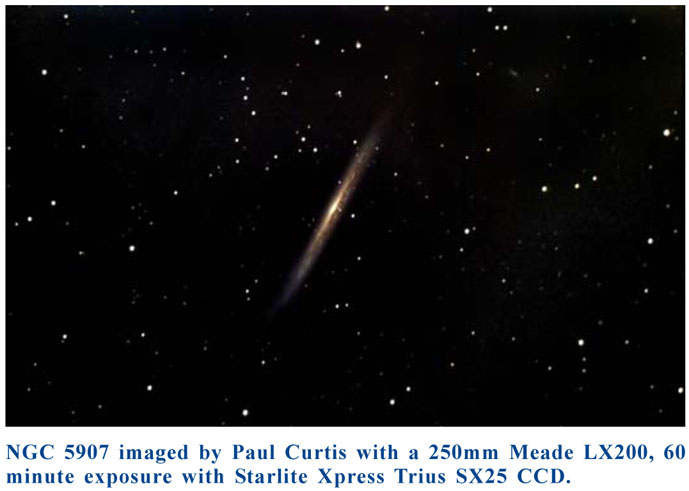 Probably though, Draco is best known for its galaxies. I am sure you could spend all your observing time just viewing or imaging galaxies in Draco and still not cover them all in a lifetime. NGC 5907 is known as the Splinter Galaxy, which appears as a short line in the sky. It is a member of the NGC 5866 Group of galaxies. NGC 5907 has some interesting star streams which make a ring around the ‘splinter’ and are visible in long exposure images – I am not aware of any amateur images of these, but it could be a target especially for those using large remote telescopes.

NGC 5866 itself is an interesting galaxy too, with a substantial dark lane. NGC 5879 is also a member of the group, and there are a few more potential members.
For those tackling our Local Group galaxies, Draco holds the Draco Dwarf galaxy (UGC10822) – a dwarf spheroidal galaxy. Although it is somewhat difficult to pick out from the starfields, a distinct concentration of stars is visible in images. Many of our local group galaxies are within reach of amateur instruments, but are rather under-observed, so if you are looking for a new challenge this would make an interesting project.

Of course there are many, many more interesting galaxies to observe and image in Draco, so equip yourself with a good atlas and start exploring. Observations of deep sky objects are always welcomed by the Section, so if you are observing Draco in 2016, please do send your observations in.