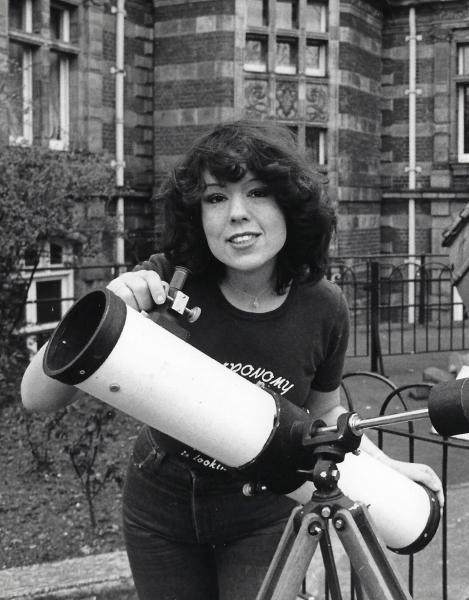 Heather Couper was well known as a popular broadcaster and writer on all aspects of astronomy, who impressed everyone around her with her enthusiasm for the subject and her joyful ebullient character. She served on the BAA Council in the 1970s & 1980s and was BAA President from 1984–’86 – the first woman and second youngest person to hold that office.

She was born in Wallasey, Cheshire on 1949 Jun 2, the only child of Anita (née Taylor) and George Couper. She became fascinated with astronomy as a child, but not mathematics, and in her teenage years she followed more typical enthusiasms such as rock bands and fashion. Indeed she could do excellent fashion drawings, and for two years went to work as a management trainee for Top Shop. But in 1969, with the Apollo missions under way, she returned to astronomy with a passion.

In that year she joined three astronomical societies including the BAA (and in 1970, the RAS), and got a one-year job at the Cambridge Observatories as a research assistant. With night studies she managed to get a maths A-Level, and then applied successfully to Leicester University, where she would gain a BSc in Astronomy & Physics (1973). She then embarked on a DPhil course at Oxford, studying galaxy clusters, but did not complete it as she realised her talent was less for the nitty-gritty of data reduction and more for expounding astronomy to the public.

From 1977 to 1983 she was Senior Lecturer at the planetarium of the Royal Observatory, Greenwich, and was popular with audiences of children and adults alike. She found that she most enjoyed presenting to adult audiences, as she was keen to explain complexities of the cosmos so as to expand lay people’s understanding. So, with her creative partner Nigel Henbest, she embarked on her long and successful career in television, radio, books, and public appearances.

Heather met Nigel in 1971, when both were students at Leicester and she had joined an astronomical society tour to Jodrell Bank that Nigel was leading. (Soon Heather became president of the society, which, she said, ‘was an excuse to have amazing parties’.) This meeting with Nigel was the start of a life-long, deeply committed – but platonic – partnership.

The below photo (by John Rogers) is of Heather at a garden party with the Cambridge University Astronomical Society in 1983, when she kissed a frog that was found in the meadow, recalling that ‘before you find a handsome prince, you have to kiss an awful lot of frogs’. In fact she was often attended by ‘handsome princes’ in her entourage, though she never married. 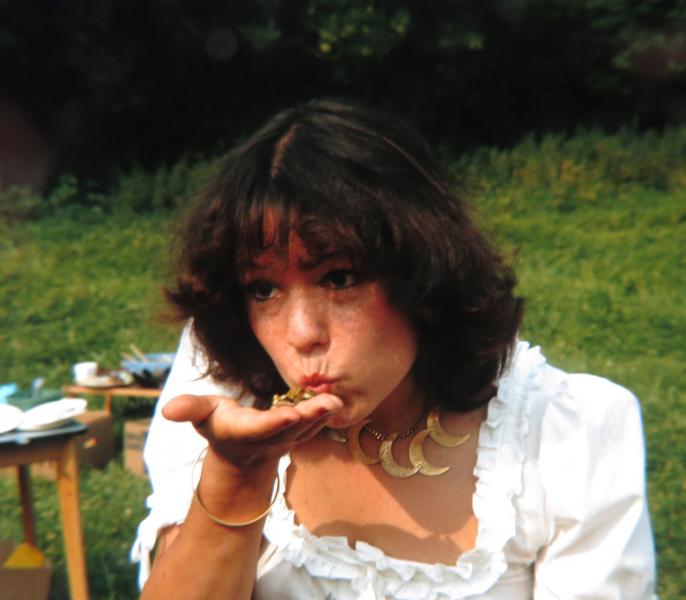 Heather was not shy of discussing her personal life with the press. Indeed she was not shy about much, and happily used her bubbly personality to draw more interest to the astronomical stories that she really wanted to convey. She was deeply shocked by a professor who told her that she should not be involved in popularising as this was ‘prostituting your astronomy’!

After university, Heather and Nigel (or ‘Hencoup’ as they were known) lived in a terraced house in Greenwich. Later they bought a beautiful old stone cottage on the scarp of the Chilterns, with a glorious view of the skies above and the vale below, which became their permanent home. There they would host lavish midsummer parties attended by a variety of friends from the astronomical and publishing worlds.

Heather rejoined the BAA in 1974, and was elected to Council the following year. After several spells on Council, she was proposed by Patrick Moore to be his successor as President, and she fulfilled this role from 1984–’86. As a young, female, and energetic President, she kept the Association in the public eye and did much to raise public awareness of astronomy. Her two presidential addresses, ‘Who discovered the galaxy?’ and ‘Who discovered the Universe?’ were very well received. She also spoke at the Winchester Meeting in 1985, on ‘A galaxy of galaxies’, during which she memorably fell off the stage behind the projector screen. After the gasp of horror from everyone, she reappeared unharmed and carried on with the lecture.

Her BAA presidency also included a more elevated experience when she was invited for lunch with the Queen. Having used the BAA Office to change for the event, she took great delight in chatting with the Queen about her dogs.

Her career as a populariser of astronomy was building up during these years. She and Nigel branded themselves as Hencoup Enterprises. In 1988, along with ex-BBC producer Stuart Carter, they founded Pioneer Productions, through which they made many television programmes as well as commercial videos. Heather rapidly established a reputation as the attractive and knowledgeable face of astronomy, who was happy to explain topics in an accessible way, sometimes without preparation.

Her television programmes included several major series for Channel 4, from The Planets (1985) and The Stars (1988) to Universe: Beyond the Millennium (1999). She made many broadcasts on BBC Radio, including two major series: Seeing Stars (monthly on the World Service, 1990–2001) and Cosmic Quest (30 short episodes on Radio 4, 2008). She also made many appearances on current affairs programmes to explain space-related topics, gave talks at festivals, and wrote many items for magazines and newspapers.

Meanwhile she published over 40 books on astronomy – many of them co-authored with Nigel – ranging from Space Frontiers (Woodpecker, 1978) to The Universe Explained: A Cosmic Q&A (Firefly, 2018). She travelled widely, visiting innumerable astronomers and observatories while researching her books and programmes, and also giving lectures all around the world. She was in demand as a celebrity speaker on cruise ships and as leader of eclipse expeditions which ranged from China to Colombia. She was interested in any and all astronomical phenomena, particularly admiring the beauty and diversity of the Universe, and its connections with broader culture. She viewed the Universe not just scientifically but aesthetically and culturally, with its dazzling variety as a counterpart to the Earth. Although not afraid to discuss topics on the fringes, such as alien life, she always gave priority to the science and her mission was to enhance the public understanding of it.

At the time of her appointment to the Gresham Professorship of Astronomy in 1993, she drafted the following: ‘How did the Universe [come into] being? Is there life elsewhere? What’s a black hole? Every day, I’m asked questions like this – questions ostensibly about astronomy, but which serve as marvellous springboards into all the other sciences. Because of this, I’ve always wanted a platform where I could address the ‘top twenty’ questions about the Universe … Face-to-face lecturing? Absolutely. That’s why I’m delighted to have been appointed … to explain – as best I can – the ‘new learning’ in the field of the sciences.’

The 400-year-old Gresham Professorship, which she held from 1993–’96, was one of many public marks of distinction. In 1993 she was also appointed to the newly created Millennium Commission (the body charged with distributing National Lottery funds on worthy causes). As the only scientist among the nine commissioners, she was proud that she could promote projects including the National Space Centre at Leicester and the Eden Project in Cornwall. In 2007 she was awarded the CBE for her service on the Commission and for her promotion of science to the public. She received three honorary doctorates, including one from her old university at Leicester. Asteroid 3922 was named ‘Heather’ after her.

She was a very sociable person, who loved parties and wine. After BAA meetings she would lead the way to the local wine bar or pizza establishment, where astronomical discussions would continue until late. At home, she and Nigel were regulars in their local pub. She was a keen dominoes player who won cups for the game, and was a great fan of classical music. While she was an enthusiastic traveller, she was also deeply rooted in the English countryside, and interested in historic buildings – especially churches. She loved animals, was passionate about animal welfare, and was a lifelong vegetarian.

She was laid to rest in a forest burial ground in the Chilterns. As the coffin was lowered into the grave, a pair of red kites gave an aerobatic display and soared past; and after everyone had left except the person officiating, a muntjac deer appeared by the graveside. Heather would have been delighted.

This obituary was prepared with assistance from Richard McKim & Nigel Henbest.