Dunsink Observatory is the oldest scientific institute in Ireland. Built in the 1780s, the observatory is situated on a hill 8km northwest of Dublin’s city centre. The observatory remains an active publicly-funded independent research centre and hosts free open nights twice a month as part of its longstanding commitment to public outreach. As a member of the NEMETODE meteor group and given my active role in helping organise amateur astronomy events at the Observatory, I encouraged the institute 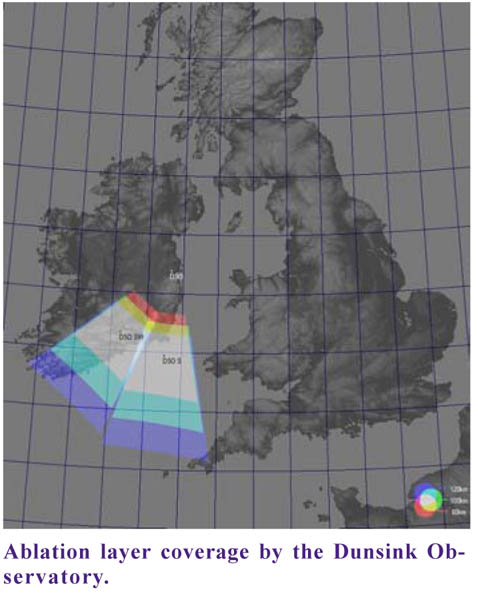 to consider installing meteor detection equipment as part of their outreach system. In 2016 March, we submitted a funding proposal to Science Foundation Ireland which received approval in July. Installation of the cameras took place in 2016 September with the radio system following in 2017 January.

The meteor cameras consist of Watec 902H3 Supreme cameras paired with Computar 8mm f1.2 lenses, and are aimed towards the south and south-west of Ireland. The radio system uses a 3-element Yagi antenna and a FUNcube Dongle Pro+ receiver to receive transmissions from the GRAVES radar system at Dijon, France which are reflected through forward scatter from meteor ion trails in the upper atmosphere.

Dunsink Observatory uses the meteor detection equipment as part of their outreach program. One recent example is from 2017 March when they hosted 5 transition-year secondary school students on a week-long science workshop. Meteors formed the main theme of their work and the students heard a number of talks related to meteor observation and analysis. In addition, the students had the opportunity to operate the video and radio systems and analyse the latest NEMETODE data. This included performing background research on meteors, calculating meteor trajectories from first principles and writing posters summarising their results.

In addition to being another valuable part of the NEMETODE network and extending the network’s ablation layer coverage further over Ireland, these systems augment Dunsink Observatory’s commitment to public outreach and promotion of Science, Technology, Engineering & Mathematics (STEM).

I wish to acknowledge Science Foundation Ireland for their generous funding of the project and the NEMETODE members in Ireland for helping install the equipment. Sincere thanks are also due to Hilary O’Donnell, Jonathan Mackey and Sam Green of Dunsink Observatory for their commitment to the project and continuously processing the data. Finally, I wish to highlight the tremendous work of William Stewart of NEMETODE and the BAA, who apart from designing, sourcing, building and testing the systems, also flew over from Manchester to help with their installation and without whom this project at Dunsink Observatory would not have been possible.