‘End of mission’ for the Rosetta spacecraft 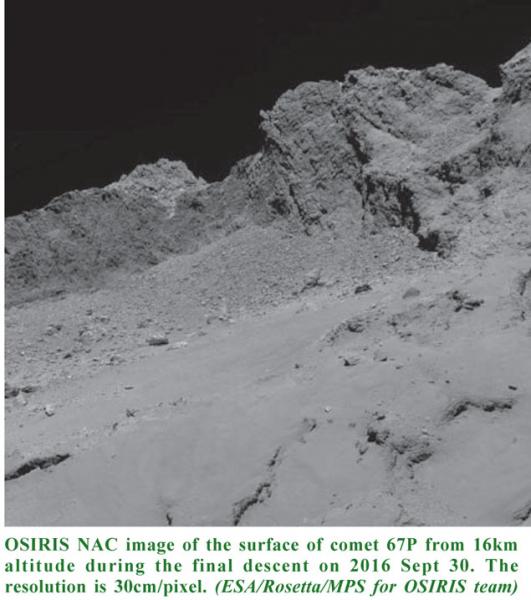 Twelve years after its launch on 2004 March 2 and two years after taking up its orbit around comet 67P/Churyumov-Gerasimenko, the spectacular Rosetta mission of the European Space Agency came to an end on 2016 September 30, with a controlled impact on the comet’s nucleus.
It was always expected that the mission would terminate around this time. The spacecraft was moving out from the Sun along with the comet and was reaching a point where the energy generated by the solar panels would be insufficient to provide power. Since the spacecraft was now moving with the comet its aphelion was considerably greater than in the earlier transfer orbit and so hibernation was not a viable option.
In addition, the comet and spacecraft were heading towards superior conjunction with the Sun and there would have been several months where controlling the craft was more difficult than usual. It was therefore decided to end the mission by ‘landing’ the spacecraft on the nucleus. Since Rosetta was not designed to land on the comet this would mark its end of mission (EOM).
International Telecommunications Union (ITU) regulations required ESA to permanently switch off Rosetta’s radio transmitter at the end of mission and this required some patches to the on-board software. When the spacecraft contacted the surface there would be a sudden change in attitude which would trigger a safe mode. The software patch ensured that the safe mode would then trigger a switch to a passive mode that was originally intended only for ground testing. This software patch was installed some time before the EOM but was not activated since entry into safe mode would then be non-recoverable. The final activation occurred three hours before impact.
Less than a month before EOM, images taken using the OSIRIS NAC (Narrow Angle Camera) finally showed the Philae lander on its side in a shadowed location on the nucleus. The images were taken on September 2 as Rosetta came within 2.7km of the surface. At this distance the camera’s resolution was around 5cm/pixel. The last time Philae had been seen was during its eventful landing on 2014 Nov 12 [see the 2014 December Journal, vol.124(6)]. The new images showed that Philae was on its side, and this explained why communication with the lander had been so difficult.
Navigation of the spacecraft close to the nucleus was complex due to the comet’s non-uniform gravitational field. On September 24, Rosetta left its close-mapping orbit and transitioned to a 16x23km orbit in preparation for the final descent. At 20:50 UTC on September 29, at an altitude of 19km above the surface, a final thruster manoeuvre placed the spacecraft on a collision course with the nucleus. The impact target was on the small lobe in the Ma’at region. This region is particularly interesting since it contains a number of active pits, each around 100m across and 50m deep, which were the source of active jets. During the descent Rosetta flew over and imaged these pits at a low altitude.
Following the collision preparation manoeuvre the spacecraft approached the rotating nucleus. One of the key objectives of the trajectory was to minimise the spacecraft’s impact velocity in order to avoid its bouncing off the surface. An impact velocity of 0.9 m/s was planned and, although this is similar to the nucleus’ escape velocity, it was expected that the energy dissipation at impact due to distortion of the solar panels would prevent the escape velocity being exceeded. We have no way of knowing whether this was actually the case, and there is a small possibility that Rosetta did bounce off the surface.
During the descent all of Rosetta’s instruments except for COSIMA, MIDAS and VIRTIS were switched on and operating. Most importantly the OSIRIS cameras were obtaining imagery. The main constraint of course was that all their data had to be sent back to Earth in real time. There would be no opportunity to send it once the spacecraft had contacted the surface.
The descent was monitored in real time at the European Space Operations Centre (ESOC) and the large display at the front of the room showed a frequency spectrum of the radio signal. The signal was expected to disappear when the spacecraft contacted the surface. This occurred, almost exactly on schedule, at 11:19:36 UTC (Earth received time) on September 30. At the time of impact Rosetta was 4.81au from the Earth (720 million km) and the one-way light time was 40 minutes, so the actual impact time was 10:39:36 UTC.
Following impact the landing site was named Sais, after the original location of the Rosetta Stone in Egypt. The incredible Rosetta mission is now over but analysis of the scientific data that it produced will continue for many years.
Nick James, Director, Comet Section