The viewer arrives in a small padded aluminium case. It fits into a standard 1.25″ drawtube and has two 1.25″ eyepiece holders, each focusable. It is well made, but quite heavy at 510g. The nosepiece is threaded for filters.

The unit is designed for Schmidt-Cassegrain telescopes (SCTs) that have a considerable focus range. The extra light path of around 90mm means that it cannot be used with Newtonian reflectors, nor many other telescopes without using a Barlow lens as well. (My 150mm ƒ/8 refractor does focus with the unit, but not with a 90° diagonal inserted so the usefulness is limited.) 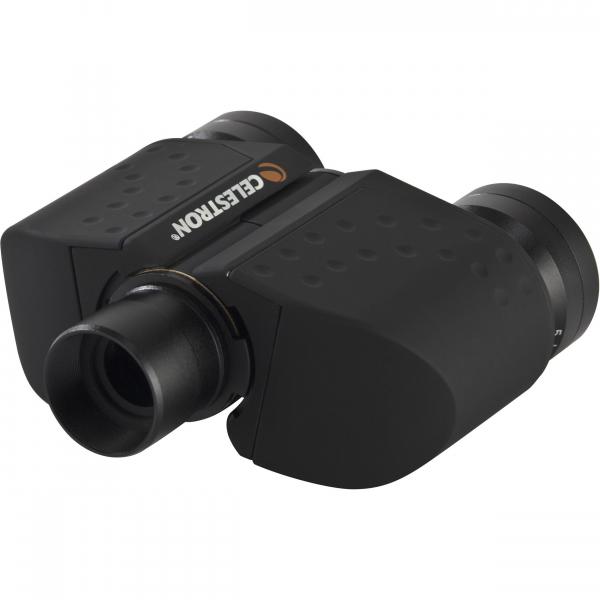 The clear aperture of the viewer is 22mm, which places a limit on the maximum focal length of eyepieces that can be used. The recommended maximum is 25mm. With such an eyepiece, there may be some reduction of light towards the edges of the field of view (vignetting), but in testing on my Celestron 14″ SCT this effect was not readily apparent.

To achieve comfortable viewing with an SCT the viewer will typically be used with a diagonal, and its considerable weight will give a tendency for the diagonal to rotate unless it is tightly clamped. Heavy eyepieces are therefore best avoided (in this regard, 2″ diagonals give much better stability than 1.25″ ones).

As with any pair of binoculars, the correct inter-pupillary spacing for the observer’s eyes needs to be set, and the focus for each eye needs to be adjusted separately. It is also important that the line between the eyepieces is exactly horizontal, for proper and relaxed merging of the two images.

Some eyepieces are not precisely aligned in their mounts. With these, rotating the eyepiece in its holder makes the image describe a small circle. Where the circles intersect, you get binocular vision and not double images. Of my five unbranded 25mm Kellner eyepieces, I found the optics of only one to be aligned well enough for this effect not to occur, but with Celestron 18mm X-Cel LX eyepieces, I found no image shift.

In my testing of the viewer, I found the image quality to be good. There were some streaky flares on Sirius and other very bright stars, but these were not unduly obtrusive. I found the image to be definitely less bright (subjectively 45% of the brightness in a single eyepiece). This loss is somewhat offset by binocular vision, but the unit cannot be recommended for observing very faint objects.

On star fields, clusters etc., binocular vision was helpful, but I did not experience the ‘3-D’ effect that some euphoric reviewers claim. A test on the rugged cusps of the crescent Moon also failed to evoke a 3-D impression. Instead the effect was relaxed viewing of a large illuminated field, to the exclusion of everything else – a total immersion in what I was examining.

Whilst the image was clear and sharp, I felt critically it was not quite as precise and detailed as when using a single eyepiece. Despite each eye examining an identical image, I gained the impression that atmospheric disturbances, especially at 217× magnification, seemed worse when both eyes were used together.

Each image was impeccably sharp, but when viewed together – despite the impact of the combined image – the fine detail was not as obvious (though it was present). Typically I would note some feature using one eye, e.g. a hill, tiny crater or delicate shadow; and then confirm it using both eyes together, but never the other way around. For resolving fine detail, I would prefer to use a single, good quality eyepiece.

This unit is suitable for medium-to-high magnifications using the Schmidt-Cassegrain telescopes for which it is designed. The minimum magnification limits the field of view, so it is unsuitable for wide-field objects.

A negative is the requirement for two identical eyepieces, but a positive is that only one Barlow lens or filter is required. Such Barlow lens(es) will conveniently provide higher magnifications without the need for extra sets of eyepieces.

It is a useful unit where light loss is not critical, but it entails a considerable shift in the focus position. More adjustment is also required for comfortable viewing than with a standard eyepiece. If other observers are present, eyepiece separation and individual eye focus need adjustment for each person, which is not practical if demonstrating to a group. Its use would therefore have to be carefully considered.