Eridanus: winter nights on the river

Overlooked in favour of the brilliant hunter Orion and his retinue of winter constellations – so choc-a-bloc of deep sky wonders – is the sky’s 6th largest constellation, Eridanus (the River). Much of it lies low from the UK; indeed the final cascade never rises from Europe. You would need to travel to Cairo to see brilliant α Eridani (‘Achernar’) scrape the horizon.

The River springs from Orion’s south-west, near Rigel. The source is at β Eridani – or ‘Cursa’ – and the river meanders mainly southwards to nearly –60° before terminating at 1st magnitude Achernar; the 9th brightest star in the Heavens. 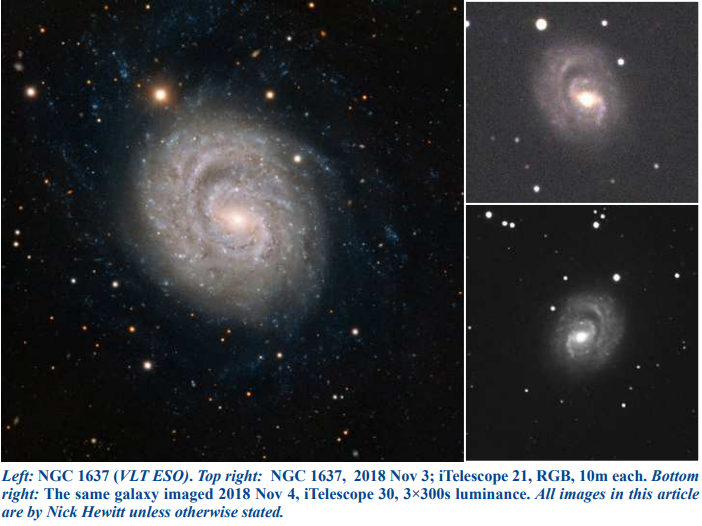 Despite the difficulties it presents, Eridanus is worth exploring on clear, sparkling winter nights when haze and the Moon are absent. Our journey begins at source and trickles west initially. ‘Downstream’ we find there are some splendid galaxies, a fine planetary nebula and a fundamental triple star. The faint ‘Witch Head’ reflection nebula (IC2118), illuminated by Rigel, is one for experienced deep imagers.

The first landmark is a galaxy, NGC 1637. As it is the highest in declination of the three large galaxies we shall meet, it should be the easiest to enjoy for UK observers: at just –3°, it is of higher declination than the Great Orion Nebula. NGC 1637 is an SAB spiral seen almost face-on, 4′×3′ (arcmin) in size and with a magnitude of +11, so not striking visually. It could be nicknamed the ‘Southern Black Eye Galaxy’ so prominent is the wide dust lane evident on images and, visually, with large telescopes. A Type II supernova (SN 1999em) was observed in NGC 1637. It is estimated to be about 30 million light-years (ly) distant. 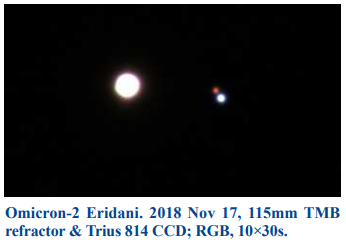 After enjoying this dusty spiral, we travel south-west and find what appears, at first glance, to be an unremarkable 4th magnitude star known as Keid, or Omicron-2 Eridani. However, have a peep using reasonable magnification and you will find this to be a remarkable triple star. The primary is a K-type dwarf, but it is the companions which are of greater interest: here we have both a white dwarf (mag +10) and red dwarf (mag +11) neatly packaged in one system. These are perhaps the easiest of white and red dwarf stars to find, as Keid is mag +4.5 and thus an easy target in the finder (or indeed, with the naked eye).

The system is 16.5ly away, a distance twice that of Sirius and its companion the ‘Pup’ – however, this white dwarf doesn’t have to contend with a brilliant primary. Omicron-2A is widely spaced from BC at 85.5 arcsec (″), while Omicron-2BC is a much closer pair at around 8″. They take 248 years to orbit one another (A-BC takes 7300 years!). Omicron-2B was the first white dwarf to be recognised as such. 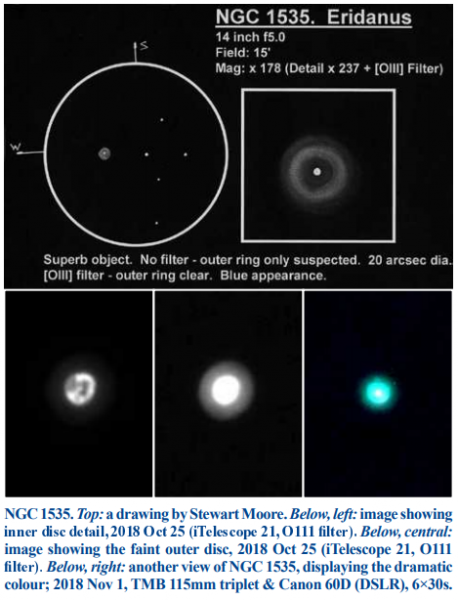 Omicron Eridani-2C is not the closest or brightest red dwarf in the sky, but certainly the easiest to find. The Universe is littered with such red and white dwarfs, but they are largely dim and so difficult for amateurs to observe – so enjoy Keid.

Drop south 5° and you will find a blue gem: NGC 1535. Recently nicknamed ‘Cleopatra’s Eye’, this lovely planetary nebula is amongst the brightest dozen in the heavens at mag +9.1. Due to this, and its high surface brightness, it is usually burned out in old photographs. However, it shows structure in short-exposure images and is a joy visually, even from suburban sites. It takes high magnification well and an OIII filter can help to show detail.

The nebula is slightly elliptical, measuring 48′×42′, with the central star at a magnitude of around +11.5. The inner disc rather resembles NGC 7662 in Andromeda (the ‘Blue Snowball’), with a bright rim around a more translucent centre. The outer surround to the bright disc is elusive, but shows well on deeper images and can be discerned on transparent nights at high magnification. The colour is remarkable, showing especially well on DSLR images. William Herschel discovered this planetary on 1785 Feb 1. 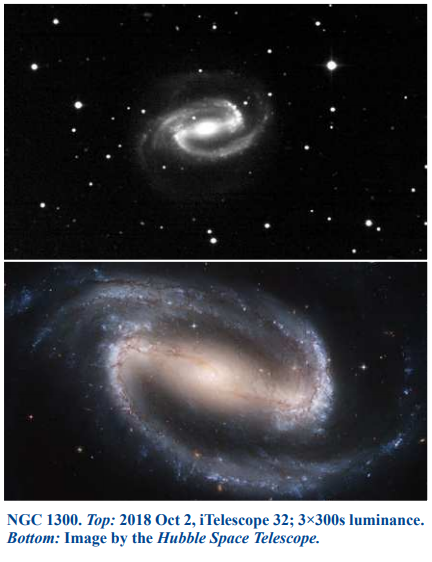 Continuing our journey, follow the ‘current’ past pulsating red giant variable Zaurak (γ Eridani). The brighter stars now veer north-west, but our next target is trickier as it is further south. Rather isolated, but worth the chase is one of the best barred spirals in the Heavens: NGC 1300. The bar is dramatic. The galaxy lies at around 65 million light-years away: a similar distance as to the Virgo cluster but in the opposite direction. It is about 110,000ly across (about the size of our Milky Way)

and a member of the Eridanus Cluster, a group of some 200 galaxies. It was discovered by Sir John Herschel while at the Cape (South Africa) in 1835.

It has bright but rather kinked spiral arms that can be discerned in large aperture telescopes; these are full of gas, dust and star clusters rotating about the stubby-barred centre. It is large, at approximately 146,000ly across – larger than the Milky Way and of similar size to the Great Andromeda Galaxy.Another member of the Eridanus Cluster can be found a little further to the south-west. Slightly closer than NGC 1300, NGC 1232 is 60 million light-years distant. It was discovered by William Herschel on 1784 Oct 20, proving that it must be possible to observe it from the UK. It is as bright as the popular Messier 100, and with the same declination as the much observed open cluster Messier 41, so it is odd that it is so under-observed. The region is rather barren near the eastern border of Cetus and north of Fornax, so this may dissuade amateurs from having a go. 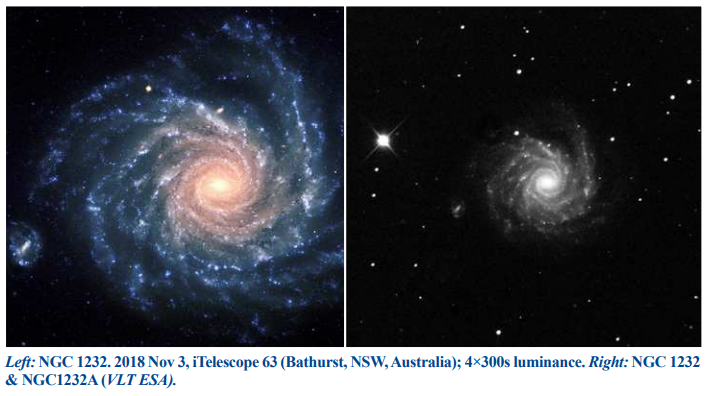 Note the small and elusive galaxy NGC 1232A, 4′ to the east-southeast of NGC 1232 and also barred. The two galaxies were one of several foci of controversy relating to red shift, led by Halton Arp who included the pair as Arp 41 in his Atlas of Peculiar Galaxies. Although radial velocity measurements suggest NGC 1232A is much more distant than NGC 1232, both galaxies remain similarly resolvable.

Eridanus now takes a giant sweep to the south-east, skirting the eastern border of Cetus. From there on observations become increasingly difficult, but before leaving the River, mention should be made of some galaxy groups that the advanced deep sky observer might enjoy. 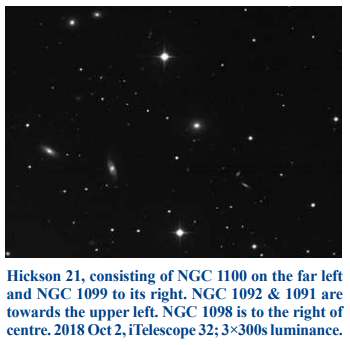 A tenth of Paul Hickson’s 100 Galaxy Groups are to be found in Eridanus, namely Hickson 21–24 & 26–31. All here are tricky, as most HGGs are hard targets anyway and these are largely low in declination.

Paul Hickson selected compact galaxy groups, whose members did not differ in brightness by more than three magnitudes, and were not subsets of larger groups or clusters (i.e. they are standalone). The best known is ‘Stephan’s Quintet’ (Hickson 92) in Pegasus and they offer a variety of tests of observing skill. Three feature here. 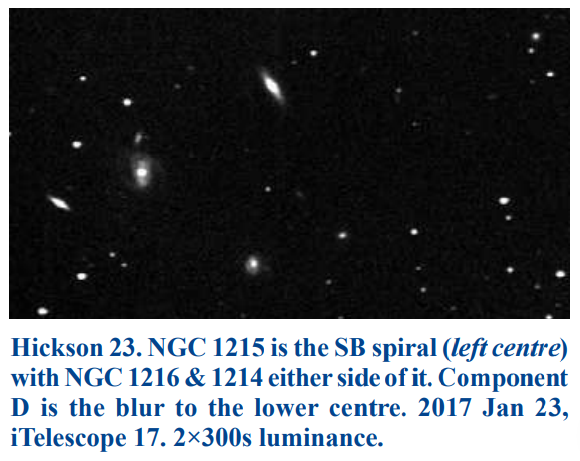 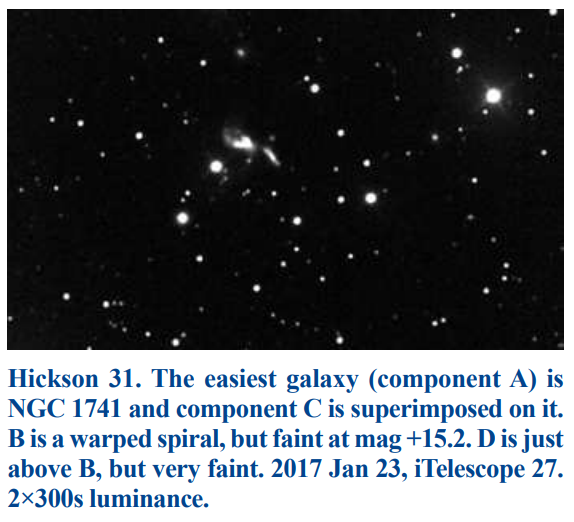 None of the Hickson groups mentioned are for the faint-hearted, but there will be observers who love a challenge. Alvin H Huey’s Hickson Group Observers’ Guide is highly recommended and obtainable through the Webb Society of Deep Sky Observers.

There are very many more fine galaxies bobbing about in the Celestial River, and exploring this most watery of constellations should be a rewarding challenge.