Exploring the deep sky around the Water Snake 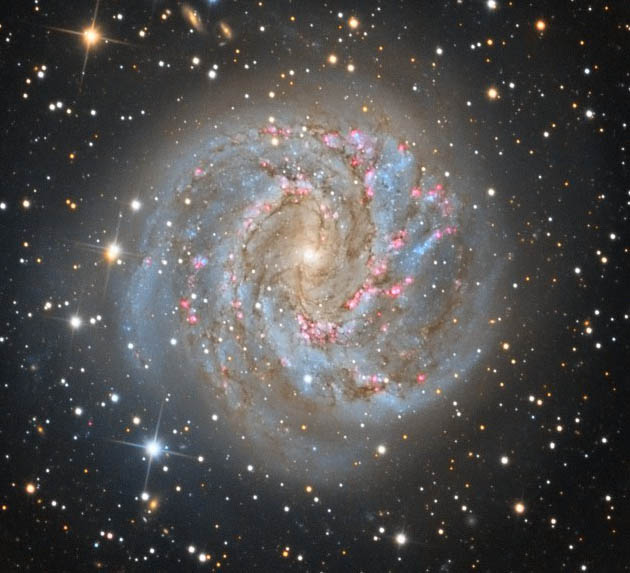 At this time of year the constellation Hydra, the Water Snake, starts to come into view. Remarkably it is the largest by area on the sky, but is another of those rather rambling and indistinct constellations which can be difficult to trace out.
It is however home to a wealth of deep sky objects, many of which are rather under-observed. There are three Messier objects in Hydra: M48, M68 and M83.
M48 is an open cluster which is in the fashionable western end of the constellation, near the border with Monoceros. There were questions over the identification of M48, with Charles Messier giving an inaccurate position in his catalogue, but it is fairly certain the object we take to be M48 is what Messier observed.
M68 is a globular cluster of Shapley concentration class X, being fairly well condensed and compact. It lies 33,000 light years away, and is in an unusual position being directly away from the galactic centre relative to our position in the Milky Way.
M83, shown here and on the front cover of this Journal, is a lovely barred spiral galaxy, known as the Southern Pinwheel.
Both M68 and M83 are in the southern parts of Hydra, so these objects are difficult to observe from the UK. Probably only in March will they peek high enough over the southern horizon to allow visual observation. Those at a more southerly latitude should be able to find them fairly easily, as they are both comparatively bright.
Hydra is quite rich in fainter galaxies, so it is well worth hunting some of these down. There are too many to list here, but a few of the brighter ones in the more northerly parts of constellation include NGC 2644, NGC 2889 and NGC 2781, which are all brighter than 12th magnitude. Good star charts such as Uranometria and Sky Atlas 2000 will show plenty of targets, as will most popular star charting software programmes.
Although not very rich with planetary nebulae, Hydra does have a couple to seek out. NGC 3242 is known as ‘the Ghost of Jupiter’ and is also listed as Caldwell 59. At around 9th magnitude it is fairly easy to find, and at low magnification has a blue/green tinge. The central star is mag 12.
Abell 33 (PK 238+34 1) is an interesting planetary with a 7th magnitude star at the edge of the nebula. It is rather faint, so probably a target for large telescopes or imagers.
Whilst browsing around Hydra, I’ll also mention a couple of objects to look out for that are not in the constellation, but are quite nearby and worth a look. NGC 2775 is a nice face-on spiral galaxy in Cancer, and is also listed as C48 in the Caldwell Catalogue.
NGC 3115 (Caldwell 53), also known as the Spindle Galaxy, is an interesting edge-on spiral galaxy that lies in Sextans. It is easy to find using Alphard (alpha Hydrae) as a starting point.
Callum Potter, Director, Deep Sky Section