Exploring the galaxies of Virgo

Perhaps this article should be called Getting Lost in Virgo, because that is often what happens when you start exploring this enormous collection of galaxies. Well away from the obscuring dust of the Milky Way, Virgo and nearby Coma Berenices are a galaxy lover’s dream. Home to thousands of galaxies in the Virgo/Coma Supercluster, of which our own Milky Way is a fringe member, they come in all shapes and sizes, many showing structure for the imager and also for the visual observer with a large Dobsonian. Even if you only have a telescope in the 20cm class all is not lost as Charles Messier and his colleagues catalogued 18 galaxies in Virgo and Coma with their rudimentary telescopes in the 1780s.

The brightest star in the region and Virgo’s leading beacon is first magnitude Spica which lies due south around midnight in April, about 25° above the horizon from mid-UK. Luckily the main collection of galaxies lies a further 25° north of this so well above trees, buildings and general horizon murk. Clear and transparent skies are essential for successful galaxy hunting and a small telescope under a brilliant sky will always out-perform a larger one under poor skies. 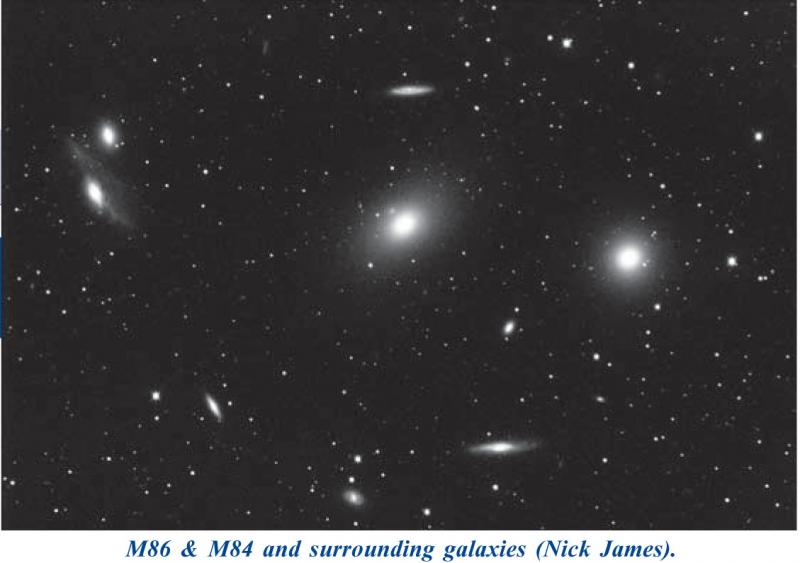 A good place to start exploring Virgo is centred on RA 12h 56m and Dec +13°. At this position the giant elliptical galaxies M84 and M86 (which lie approximately 5° northwest of mag +5 rho Virginis) will dominate the view. Discovered by Messier in 1781 they both fit comfortably inside a half-degree eyepiece field. Visually they appear similar in size and shape but M86 is slightly more oval than M84 – an E3 class galaxy compared to E1 for M84. Under a good sky a 30cm telescope could show 6 or 7 galaxies within a 1° field here. M84 and M86 are shown well in the image by Nick James, taken remotely using a GRAS Takahashi Epsilon 250 and ST8XE camera in 2010.

Lying to the left in the image are NGC 4435 (above) and NGC 4438 (below). Commonly known as Markarian’s Eyes, this pair of galaxies is also catalogued as Arp 120 in Halton Arp’s atlas of peculiar galaxies. It is thought that NGC 4438 probably started out as a spiral galaxy but gravitational interactions with its neighbours resulted in the long drawn out tails of material now observed.

M84 and M86, along with the 2 NGC galaxies mentioned above, form the beginning of a collection of galaxies known as Markarian’s Chain, named after the Armenian astronomer Benjamin Markarian, who discovered in the 1960s that these galaxies all move with a common motion, although some of the fainter members are actually background galaxies superimposed by chance. The image of the ‘chain’ shown here was taken by David Davies in 2017 May using a 107 APM triplet refractor with a QSI 583 camera and Astrodon filters. Visually a 30cm telescope under a reasonable sky should show the main members with ease. Whilst the chain starts in Virgo, the last few galaxies are in the neighbouring constellation of Coma Berenices.

The 5-star galaxy of Virgo has to be M87 (RA 12h 30.8m, Dec +12° 24′). This enormous elliptical galaxy, which lies around 1° southeast of Markarian’s Eyes, is also a very strong radio and x-ray source known as Virgo A or 3C274. Its diameter is similar to that of the Milky Way but whereas our galaxy is a flat spiral, M87 is spheroidal. It is estimated to lie around 55 million light years distant and have a luminosity of 130 billion Suns and a central black hole of some 2.5 billion solar masses. With a visual magnitude of 8.6 and a diameter of 7 arcminutes it is bright enough to be easily visible in 10cm telescopes or large binoculars, where it will appear rather like an unresolved globular cluster fading gently from the centre. Unlike a spiral galaxy with its arms and dust lanes, even a large telescope will show little extra detail in M87, although imagers can record hints of the jet of plasma emanating from the galaxy’s centre.

To give some idea of the scale of M87, our Milky Way has a halo of some 160 globular clusters while M87 contains around 12,000. The image of M87 shown here was taken by Andrea Tasselli using an Intes Micro M809 Maksutov-Cassegrain and SXHV9 camera. Observers with large telescopes may just glimpse two other NGC galaxies (NGC 4478 and 4476) lying a few arcminutes to the west of M87. 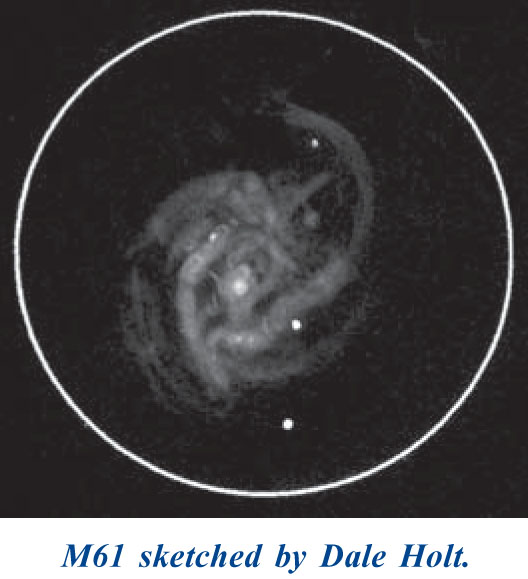 For our final object we will drop south from the Virgo/Coma supercluster to the stunning spiral galaxy M61. It lies at RA 12h 21.9m and Dec +4° 28′ but, if you don’t have GoTo or setting circles, an easy way to locate it with a Telrad or red dot finder is almost exactly midway between mag 3.4 delta Virginis and mag 4.1 nu Virginis. At magnitude 9.6 and 6 arcmin in diameter it is one of the best face-on spiral galaxies in the Messier catalogue. Although small in size, under a truly dark sky you will find it takes magnification well in a large telescope, although in mediocre skies it is probably a galaxy best suited for the imager. The drawing of it here was made by Dale Holt using a 350mm Newtonian and Watec video camera, sketching from the computer screen.

If you observe any of these objects do send your observations to Callum Potter, Director of the Deep Sky Section.

Stewart Moore
Stewart was Director of the Deep Sky Section from 2004 until 2013.