Exposing the Heart of Darkness: the black hole in M87 imaged 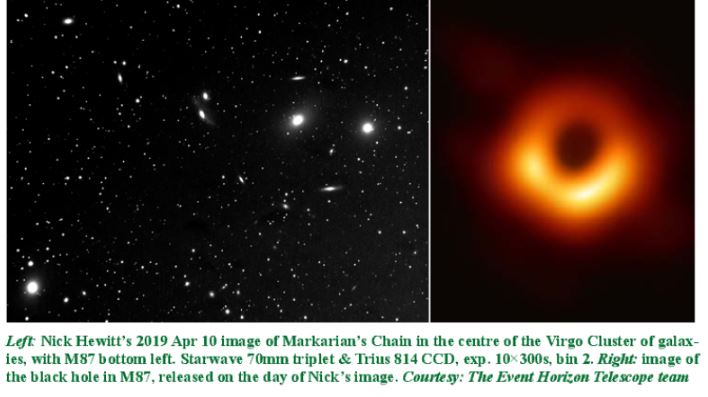 On Apr 10, the first image of a black hole was released by the team coordinating the Event Horizon Telescope array: a phenomenal feat of cooperation between eight radio telescopes dotted around the world, using very-long-baseline interferometry.

Its target was the centre of Messier 87. This is an enormous beast and perhaps the dominant galaxy at the centre of the Virgo Cluster, that in turn is the largest cluster of galaxies in the super-cluster that includes our outlying Local Group. Although similar in diameter to the Milky Way, M87 is a sphere rather than a disk and so it contains many more stars, with a mass of some 2.4 × 1012 solar masses.

Although dull to look at with amateur telescopes – and not much better with even the Hubble Space Telescope – it is in truth an important and very active galaxy (Virgo A), with a powerful jet 5,000 light-years long visible in optical wavelengths. Heber Curtis noted the jet in 1918 and it has often been imaged with amateur telescopes.

That a massive black hole generated this jet has been known for decades, but an image of it was widely thought to be impossible – until now. 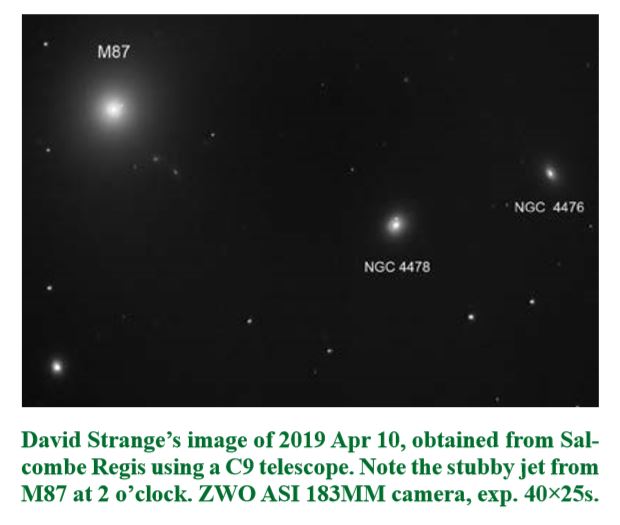 The galaxy is 55 million light-years from us, but still can be seen in a finder telescope or large binoculars from dark skies, as it is magnitude +8 and around 7 arcminutes across. It has several companion galaxies (including NGC 4476, NGC 4478, NGC 4486A & B) and some 14,000 globular star clusters.

On the night of the press release, Nick Hewitt and David Strange found they were under clear skies and felt imaging this phenomenal galaxy would be fun.

A considerable portion of the galaxy’s mass is the black hole, accounting for 6.5 billion solar masses. The Event Horizon Telescope system used the Earth as a baseline and captured the brilliant, superheated gas falling into the black hole, thus allowing it to be imaged in silhouette for the first time.