Fireball over southern England on 2016 March 17 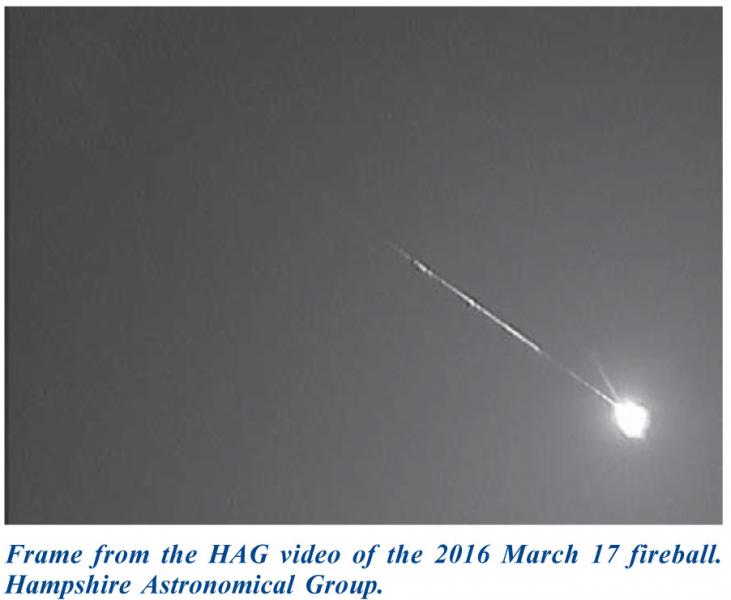 A quarter past three in the morning – not a promising time of day for a national news event to break. But a few hardy souls on early morning delivery runs, together with a band of shift workers and insomniacs, were witness to a spectacular fireball display at 03:16:54 UT on Thursday 2016 March 17.
The fireball entered the Earth’s atmosphere somewhere over Bournemouth and burned brightly until it faded over the Andover area. At its peak there was an explosion which has subsequently been estimated at around mag -14, and videos show a clear persistent trail.
As soon as I noticed the chatter on the internet I checked the Clanfield Observatory meteor monitoring cameras. The Hampshire Astronomical Group has three, pointing to the NW, the NE, and the SE. Experience has shown that all the ‘bright ones’ creep down the edges of the video, either just in or just out of sight. Once in a while, however, you get lucky and on this day we did exactly that with our NW camera – the meteor trail beginning in the top left of the frame, and following the diagonal down to the bottom right hand corner. The first camera checked had an event at the correct time, but the integrated jpeg was a complete ‘white out’. Playing the video compounded the disappointment as we had only captured a flash, out of frame. The second camera checked had delivered. The third camera was another ‘white out’. Clearly, the mid-trail explosion had lit up the entire sky over South Hampshire.
Throughout the day, other UKMON meteor stations reported sightings including two impressive results by Richard Fleet from Wiltshire. In total, the event was captured by 8 of their cameras. NEMETODE, the other meteor observing network in the UK, didn’t fare quite so well – their network has better coverage of the north of England where it was clouded out – however they did capture videos from two cameras in Basingstoke (one of which appears to be the only record of the end of the trail), and of course from our Clanfield camera (The Hampshire Astronomical Group are members of both of these networks and benefit from the complementary skills and expertise of both groups). Perhaps surprisingly, many other stations across both networks (from Scotland, to Ireland, to Essex) did register the event – as a flash, just as two of our Clanfield cameras did.
Analysing a fireball of this magnitude is not for the faint hearted – the intensity that made it such a spectacle, burnt out the pixels on many of the video frames so standard processing in the UFO Analyser tool that both networks use, was going to be tricky. Knowing this, Richard Kacarek of UKMON gathered all the information from the UKMON stations and passed them to experts at EDMOND and the IMO who were able to process individual frames from sites in Northen Ireland, Devon and Hampshire to produce an initial analysis.
The HAG video is on YouTube: https://www.youtube.com/watch?v=hcGD0jJ9mUg
Other videos can be found on the UKMON website: http://www.ukmeteornetwork.co.uk/2016/03/huge-fireball-17-march-2016-at-316/