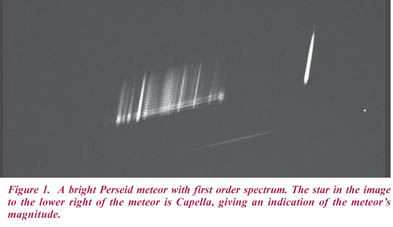 Spectroscopy is an important aspect of meteor studies as it enables the chemical composition of incoming meteoroids to be determined. Typical spectra show the bright lines of metals such as calcium (Ca), sodium (Na) and magnesium (Mg).

As part of a continuing video observing programme an attempt was made to secure meteor spectra during the night of the Perseid shower maximum, 2013 August 12/13. A Watec 902H2 Ultimate video camera with a Pentax 12mm f1.2 lens was used and equipped with a 300 lines per mm transmission grating.

The weather was not favourable from the author’s observing site on the night of the peak; however several long clear spells did develop and over 60 meteors were caught by the ‘meteor spectroscopy camera’. Of these, 24 had spectra and a few were exceptional, showing good detail and some unusual characteristics.

There are some limitations with video meteor spectroscopy. Since the camera is running at 25 frames per second and the light from any given meteor is split into its constituent components, a meteor has to be both close to the field of view of the camera, and also very bright, to generate a spectrum. Since there are relatively few very bright meteors, this limits the number of spectra even during a reliable shower such as the Perseids. A second drawback is the limited resolution available. The small size of the chip, the pixel size and low grating linecount combine to limit the ‘detail’ that can be seen within the spectra recorded.

Light transmitted by the grating is diffracted to each side in a number of ‘orders’. The brightest is the first order and then the second and so on. It is a quirk of nature that the way light diffracts through a grating means that there is an increase in dispersion with increasing order. The second order has twice the dispersion of the first order. However, with higher order and better dispersion the image becomes dimmer,and there is also what is known as overlap – where spectra run into each other. There is always a compromise between a bright image and a detailed image!

Figure 1 shows a bright meteor with the first order spectrum to its left. Using the image processing package IRIS, a section can be made showing the intensities of the lines to give a spectrum graph as shown in Figure 2.

Two exceptionally bright fireballs produced good second order spectra that allowed several fainter lines to be identified. The video composite of the first is shown in Figure 3. The meteor itself was not captured; it ran just outside the field of view to the left. This meteor showed a very unusual spectrum. As the object finally ablates, the image is composed of two distinct spectra. The lines in the ‘upper’ and ‘lower’ components have significant differences, possibly indicating fragmentation or some variation in the meteoroid characteristics (Figure 4). It should be remembered that the event is happening extremely rapidly: the meteor is entering the atmosphere at approx 60km/sec and the image represents 1/25 of a second!

The second Perseid fireball also generated a second order spectrum. It too ran just outside the frame to the left. Figure 5 shows a single de-interlaced video frame with the brighter lines identified. The lines marked with ‘?’ are in all probability Iron (Fe) lines. This ambiguity illustrates the resolution limits with the video technique since there are several closely-spaced lines around the wavelengths measured.