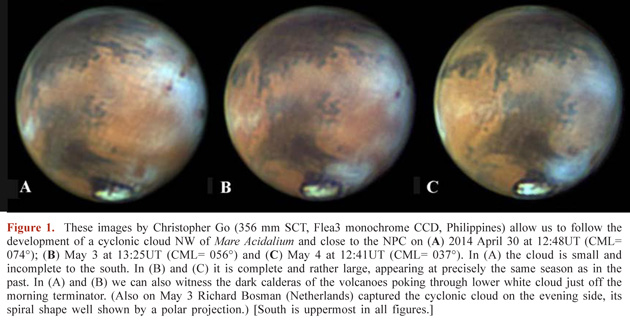 Mars came to opposition on 2014 April 8, and the Director is pleased to report he has been deluged with observations from over 60 contributors. Excellent work has been done in the UK, but the highest resolution observations have come from a number of observers based in Australia and the USA.
The planet has followed the usual seasonal course of events, with a small, rifted and near-static summer N. polar cap crowning the bottom of an inverted telescopic image, with bright white morning and evening limb clouds (especially those over the martian volcanoes in Tharsis, and over Olympus Mons and Elysium Mons), the equatorial cloud band much in evidence in blue light, and very little in the way of dust storm activity (with the odd small event at the edge of the polar cap).
By mid-April there was the first sign of cyclonic clouds in the Baltia area, as observed at the same season in earlier years. In 1995

and 2012 (under less favourable circumstances of imaging technology in 1995, and of disk diameter in 2012) BAA observers had found them fully developed by Ls= 127°. This year the clouds were fully developed at the start of May (Ls reached 125° on May 3). There was little change on the martian surface from 2012, though a few subtle variations were detected, among which was a slight fading of the dark marking in the Aetheria desert, at the NW corner of Elysium.
A full report will be presented later, but in the meantime we show some of the more interesting results up to May 6 on the front cover and here. Full details are in the figure captions.
As usual I make the request that observers try to follow the planet for as long as possible after opposition in order to give a long run of observations for later analysis. Every image or drawing will count!