There were four binocular comets visible in the 2013 November morning sky, and they demonstrated the oft-quoted remark that comets are like cats: they have tails and do whatever they want to.

One of the quartet behaved much as expected, but then it has been under observation since 1786. Periodic comet 2P/Encke was on its 62nd observed return, showed its usual diffuse coma and narrow ion tail and had a similar faint absolute magnitude to that seen over the last half-century. 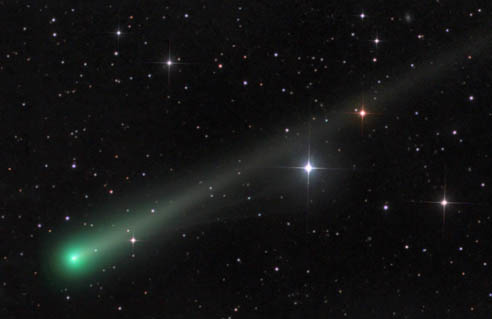 New comet C/2012 S1 (ISON) brightened extremely slowly, indeed more slowly than a purely reflective body should do. A comet’s lightcurve is a complex function, and while it is usually represented by a simple power law, this does not always represent the physics of the comet’s nucleus. The orientation of the pole of the rotation axis with respect to the plane of the orbit, creating seasonal effects; the rate of rotation; the percentage of the surface that is active; and the chemical species subliming from the surface are among the many other effects that could play a part. This means that while it is possible to fit a lightcurve to what has been seen to date, the fit does not necessarily provide a good prediction of the future. The answer is to go out and observe – you could get a nice surprise.

The slow rate of brightening meant that planned observation from Mars by the NASA rovers was not possible, however Earth-based images captured some superb views of the comet on its run into perihelion. One of the best, by Damian Peach using a remotely-operated telescope, is given here, and there are many others in the Section Web gallery.

Comet 2012 X1 (LINEAR) showed another aspect of cometary behaviour – an explosive outburst as described by Richard Miles on page 363 of this Journal. We can hope that C/2012 S1 (ISON) will show a similar effect and be rejuvenated by the time it reaches perihelion, after this issue of the Journal goes to press.

The final member of the quartet, C/2013 R1 (Lovejoy), brightened much more rapidly than the average and reached naked-eye brightness in early November. Visually it appeared much like a globular cluster, though deep images showed a faint ion tail.

This diversity of cometary behaviour shows why it is worth going out to observe comets – predictions are often wrong and you might be the one to discover a major outburst. Even if you don’t make a discovery, properly reduced data, whether visual or electronic, add to the lightcurve and help us to understand the physics of cometary activity.