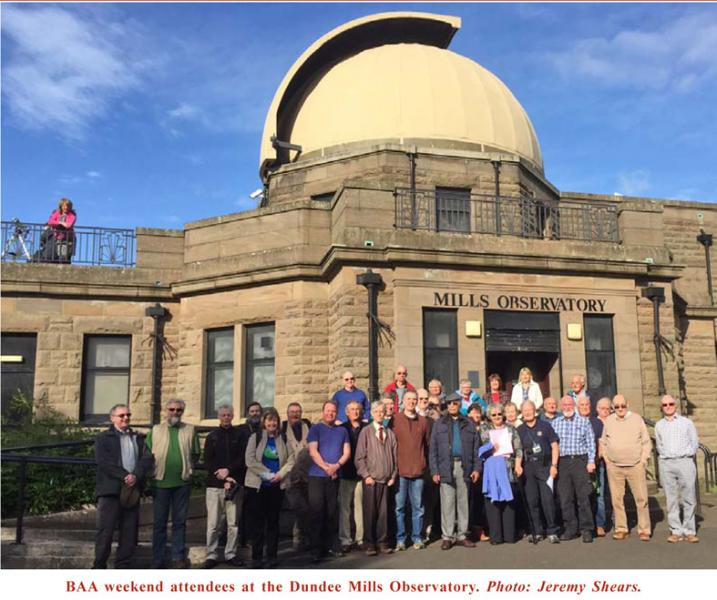 ‘Whatever happened to summer?’ was the common refrain issuing from many people’s lips over the last few months, at least in this part of the UK! Certainly my observing statistics show that I endured the longest observing drought (if that is the right word, considering the deluges we experienced) I can remember. However, I was fortunate to escape to Greece for a holiday, where I enjoyed clear and transparent skies every single night. The only optical aid I had was a pair of 8×42 binoculars, but these provided marvellous views of the Milky Way from Cygnus down into the dense star clouds of Sagittarius – not something I ever see at home. It reminded me of the pure joy that can be gleaned from celestial sightseeing with modest equipment under dark skies. I was able to do a spot of variable star observing with the binoculars too.
I carried out the annual cleaning and re-painting of the observatory, anticipating the new observing season that is now upon us. With darkness falling earlier, let’s hope we’ll all be able to get outside and enjoy some clear nights. If you’re new to astronomy, or want to know about what and how to observe, why not come along to our ‘Back to Basics’ workshop on Saturday October 15 at the South Downs Planetarium in Chichester? These workshops are open to non-members too, so if you know somebody who might enjoy attending, do tell them about it. Further details can be found on the BAA website.

Meanwhile I’ve just returned from the BAA autumn weekend at the University of Dundee. We were given a very warm welcome by Dundee Astronomical Society, which is celebrating its 60th anniversary this year. Besides a brilliant series of talks, highlights for me were having the honour of presenting the Lydia Brown Medal to Ken Kennedy, who recently retired as Aurora Section Director and who is also a longstanding member of Dundee AS, and the Horace Dall medal to Len Clucas of Newcastle-upon-Tyne.
Both the Solar Section and the Aurora & Noctilucent Cloud Section put up some arresting displays of their work, which linked well to the theme of several of the talks. It was fitting that Council, also meeting in Dundee, approved the renaming of the Aurora Section to include ‘Noctilucent Cloud’ in its title, thereby reflecting better the observational work conducted by the Section. When announced during the main BAA meeting, the new name was greeted with spontaneous applause!
On Sunday we visited the Mills Observatory to view the fine 10-inch (25 cm) Cooke refractor. It was a sunny morning, so we were also able to take in  some fine views of the Sun through a host of telescopes. Many thanks to Hazel Collett and her helpers from Dundee AS for organising such a wonderful event.

I mentioned in the June Journal that our Robotic Telescopes coordinator, Peter Meadows, wished to stand down from the position. I’d like to thank Peter very much for his work in encouraging and supporting the use of remote telescopes by BAA members over the last 6 years.
I am pleased to advise that Council has appointed Mike Harlow as the new coordinator. Mike lives near Ipswich and has been an avid user of remote telescopes for several years. One long term project he been engaged in is monitoring morphological changes in variable nebulae, and he has also taken on the role of co-ordinating the Deep Sky Section’s Variable Nebulae observing programme. If you have a project in mind that would benefit from having time on a remote telescope, do get in touch with Mike (his email address is at the back of the Journal). And don’t forget that the BAA provides a 50% subsidy on the commercial rate for approved projects as part of your membership benefits.

October AGM and the Christmas Lecture

I always look forward to the arrival of the October Journal and to reading the Report of the Council on the work carried out by the Association during the last session. I never cease to be amazed by the variety of work undertaken by our observing Sections, our members and our officers – and this year is no exception. Do take a few minutes to read through the material: you will see that your Association really is alive and thriving! And perhaps you’ll spot something you’d like to know more about or become involved with – in which case do contact the relevant Section Director or officer.
I’ll cover some of the highlights of the 2015/’16 session during our AGM on Wednesday October 26, where I’ll also present my Presidential Address. Traditionally, Presidents try to keep the details of their Address under wraps until the night itself – suffice to say that I hope there will be something of interest for everyone in it. I’d love to see you at Burlington House.
Looking slightly further ahead, the BAA Christmas Lecture will be given by Dr Carole Haswell (Open University) on ‘2016 Exoplanet Adventures’ on the afternoon of Saturday December 10, also at Burlington House.  We do hope to see you there, and it might also be an opportunity for a spot of Christmas shopping in the metropolis!