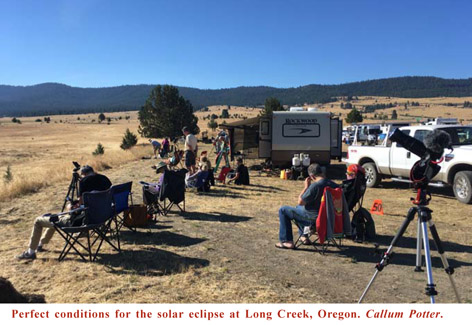 Highlights of 2017
Looking back at 2017 it was perhaps not the most outstanding year for astronomical phenomena, but the highlight of my year was the total solar eclipse in August. We had organised a trip to the Canadian Rockies and then a swift jaunt down to Oregon for eclipse day itself. There was quite a bit of trepidation – would the weather be fine, would the highways be gridlocked and the road to the path of totality be barred, would wildfires spoil the view?

My wife and I stayed in Baker City the night before the eclipse and headed south just before dawn to our observing location in the sports fields of the elementary school of the ‘city’ of Long Creek. In the event the traffic was light and the conditions for the eclipse were perfect. I’m not really an eclipse chaser (never had deep enough pockets!) so this was just my second total eclipse after 1999, where we saw it from France. But I was better prepared for this one, and it really was a spectacular event.

A superb Christmas meeting
It’s been a few years since I attended one of the BAA Christmas Lectures so I was especially pleased to chair it last December. It was splendid to see so many BAA members there – we had around two hundred present, which must have made it the best attended event in the BAA calendar. Many thanks go to Hazel Collett, our Meetings Secretary, for organising the event and arranging the excellent speakers, and also to the Institute of Physics, who were kind enough to sponsor the meeting.

Prof Martin Barstow, University of Leicester, spoke about the Hubble Space Telescope and future space telescopes, and Dr Christian Trenkel, Airbus, talked about Gravitational Waves and the LISA and LISA Pathfinder spacecraft missions. These talks really captured the confluence of astronomy, physics, and engineering excellence. Nick James delivered the seasonal sky notes, and if you missed the meeting all the talks are available for members to view on the BAA website.

Light pollution and LEDs
It was depressing to read recently that the switch-over to LED street lighting has not seen a decrease in light pollution, but in fact an increase. No doubt there will be many views on why this rather unexpected effect arose. My observation has tended to be that the LED streetlights have been fitted on higher poles, with a wider spread than the old lights, and probably have a higher radiance than the old lights. No doubt this does save energy, but does not necessarily help our light pollution problems. The new LED street lights should be more controllable, but it seems that few areas have dimming and switch-off regimes. There is still much work for the Commission for Dark Skies to do so we must give them our full support.

Star names now IAU standardised
On the topic of things that I never knew, I recently became aware that the International Astronomical Union had standardised the proper names of stars. It can be a bit confusing, because some stars share the same name, and many names have a variety of spellings. The first IAU list of proper names was created in 2016 and this was updated at the end of 2017. So if you ever need to check the proper name of a star you can view the list at www.iau.org/public/themes/naming_stars/

Astrofest comes round again
On February 9 and 10 the European Astrofest returns to its regular venue at Kensington Town Hall, London, and the BAA will have a stand at our usual location on the lower floor. It’s always a good opportunity to meet members, so I do hope you will stop by and say ‘hello’.