The 2017 Sir Patrick Moore Prize
At the Bristol Back to Basics meeting on March 10 I had the great pleasure of presenting the Sir Patrick Moore Prize for 2017 to Martin Edmonds. Martin, who lives in Plymouth, was unable to attend the Christmas Meeting where it is normally given, and this was the first opportunity. Martin is a worthy winner of the prize for his promotion of astronomy to the young people around Plymouth – he organises an annual schools competition where students can submit their drawings, paintings or photographs of the Moon in memory of Sir Patrick.
Nominations for the 2018 prize are now being sought. 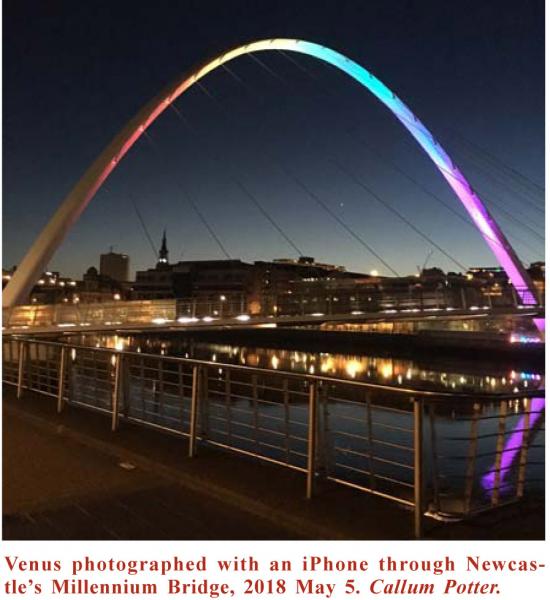 Past and future BAA meetings
There have been a number of excellent meetings of the Association over the past few months. Unfortunately, due to the ‘the beast from the east’, I had to postpone the annual meeting of the Deep Sky Section on March 4. Luckily the venue, Bedford School, was available for another try on April 22, and the weather was near ideal on that day. As the school is only available for external events like this on Sundays, it was unclear if this would potentially be a problem, but in the end we had nearly 100 attendees, about the same number as the previous year. Much thanks goes to Bedford School and Bedford Astronomical Society for all the local organisation.
I have just returned from a scorching weekend in Newcastle for our Spring Meeting. In the morning, two of our leading observers presented their work on amateur spectroscopy (Andy Wilson) and occultation observing (Alex Pratt) – both these topics are very accessible to those starting out in astronomy, as well as those who are more experienced, and there are a wide range of projects to get involved with.
In the afternoon we had three excellent talks by the ‘pros’ – Prof Alan Hood talked about the physics of our Sun, Prof Stuart Reid on the LIGO gravitational wave detector (perhaps one of the most astoundingly high resolution devices humankind has constructed), and Dr James Nightingale discussed the uses of gravitational lenses for observational astronomy. Much thanks goes to Hazel Collett our Meetings Secretary for all the hard work that goes into organising events like this, and also to the local organisers Newcastle Astronomical Society, who have a history extending back to 1904, including prominent astronomical figures such as Espin and Phillips.
Looking forward we have two further excellent meetings in prospect. Our Summer Meeting will be held at Warwick University over the weekend of July 7-8. This year the meeting is in two tracks, with one focusing on variable stars, a joint meeting with our cousins over the pond, the American Association of Variable Star Observers (AAVSO). The other track is themed around ‘Exploring Solar Systems – Near and Far’. The programmes for both tracks are really fascinating and it will be hard to choose on the day: you can of course move from one track to the other and select the talks of greatest interest as you wish.
In September our Weekend Meeting is being held in Christchurch, Dorset, and themed around ‘Cosmology: Theories and observations of the Universe’. Again an impressive line-up of speakers will make it one not to be missed. Bookings for both meetings are open now at www.britastro.org/meetings

Your privacy and the Association
By now few people will be unaware of the General Data Protection Regulations which came into effect on 2018 May 25. Considerable time has been spent on these by our Trustees to establish how they should apply to the BAA. Like much modern legislation the GDPR require you to look and think about how the regulations apply to your organisation – they are not a prescriptive one size fits all. Elsewhere in this issue of the Journal you will find a short discussion about the GDPR and our new privacy notice, which is also available on our website.
As the summer months approach many of us deep sky observers tend to shut down as the nights grow short, but it is still an exciting season to be out observing. Noctilucent clouds will hopefully be in evidence again this year, and there is usually a chance for some solar observing, even though we seem to be at a low for activity on the way to solar minimum. But I hope you do manage to get out to do some observing over the coming months, and look forward to seeing your results.