From your new President

It is a singular honour to be elected as President of the Association, and our last president, Dr Jeremy Shears, will be a hard act to follow – much thanks goes to Jeremy for guiding the Association so expertly through the past two years. All the past Presidents I have talked with have expressed how much they have enjoyed being President so I am looking forward to it, and I hope the year ahead will be a good one for the BAA.

Much of what the President does is probably not very visible to members, so I plan to post updates to my Member Page on the BAA website (https://britastro.org/member_ profiles) from time to time to give a flavour of what goes on. We have new Board and Council members, details of whom can be found on the back pages of this Journal as usual, so a warm welcome to them. Thanks must also go to the members of the Board and Council who stand down this year, and particular thanks to Alan Lorrain who as Treasurer has looked after our finances for many years, and to welcome Geoff King our new Treasurer. Thanks also to Bob Marriott who resigned from Council as Director of the Instruments and Imaging Section at the end of the 127th session.

For those who enjoyed my regular contributions on a deep sky theme to the Observers’ Forum in the Journal, I am sorry to say that during my Presidency I am not likely to have time to write these, but I am very grateful to Nick Hewitt and Stewart Moore who will cover this for me in future issues. A major challenge for this year is to find a new Editor for the BAA Journal. Hazel McGee has done a magnificent job over the last 24 years. Of course there is a lot of work for one person, and being dependent on one person is not ideal (a single point of failure, SPOF, as they say in the business world). So we need to consider whether it would be better to have a small team to produce the Journal every two months. Expressions of interest have been asked for before, but perhaps doing the whole job might be thought too demanding. Perhaps as part of a team this might be more attractive. We would be looking for people with skills in any of graphics, copy-editing, page layout – so if this might be you, please get in touch. 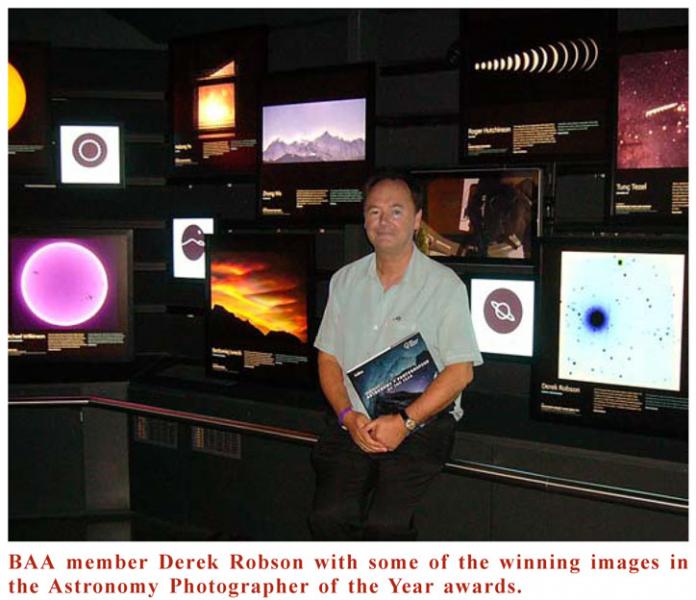 Astronomy Photographer of the Year

In September, as Jeremy was away on business, I was fortunate to be able to represent the Association at the Insight Astronomy Photographer of the Year awards evening which was held at the Royal Observatory, Greenwich. There were something like 3800 entries from photographers in 91 countries who contributed images in nine categories, and two additional special prizes. The presentations to the winners, runners-up and highly commended were made in the planetarium with the images projected onto the dome. All the images were outstanding and it must have been a very difficult job for the judges to decide.

Being an international competition it should not be surprising that many of the finalists were from outside the UK – but I was surprised so few UK astrophotographers were represented.  BAA member Derek Robson received a highly commended award for his image of Near Earth Object 164121 (2003 YT1) on 2016 November 2. The image and award were very poignant for Derek who lost his father in 2016, the year the image was taken. Gerald Rhemann, a regular contributor to the Comet Section, won the Robotic Telescope category with his image of comet C/ 2013X1 Panstarrs (see front cover) with the Helix Nebula.

And there was some success for UK astro-photographers: Roger Hutchinson won in Planets, Comets and Asteroids with an interesting presentation of Venus through its phases, Olivia Williamson won the Young Competition with a fine image of Saturn, and Alexandra Hart won the Sun prize for an excellently executed image of the Sun in hydrogen alpha with Mercury transiting.

One take-away for me from the competition, though, is that these images are being judged as ‘photographs’ – not necessarily as astro-images. So composition, atmosphere and presentation are as important as technical excellence. And while many of the images capture a moment, there is also a lot of planning and preparation necessary to seize that moment. I hope that for the 2018 competition maybe a few more BAA members will enter and be successful. If you would like to view the 2017 winners you can find them on the website www.rmg.co.uk/discover/astronomy-photographer-gallery

I was sad to hear of the passing of Jim Hysom, the master optician of AE Optics, who will be remembered by many members. I did not know Jim very well but met him a few times and he was very amiable. A highpoint was having lunch in Cambridge with Jim and John Dobson (the American who ‘invented’ the Dobsonian telescope). John Dobson was of course rather more eccentric than Jim!

Finally, December 9 is our Christmas Meeting which is being held at a new venue for us in London, at King’s College London on the Strand. We greatly appreciate the support of King’s College in running this event and the sponsorship of the Institute of Physics. I hope to see you there!