George Alcock: an artist among the planets 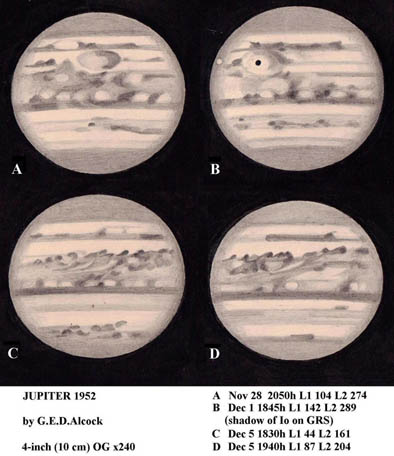 I first met George Alcock over 30 years ago when my good friend and fellow schoolmaster John Brown invited him to give a talk at Oundle School, which is but 11 miles from where George lived. We showed him our 4-inch (10 cm) Cooke refractor on its cast iron pier in its dome, and George told us about his very similar 4-inch, mounted on a tripod, but for which he had no permanent shelter. This particular telescope was recently described by Neil English in Astronomy Now, and recent tests have affirmed its optical excellence, as well as confirming that it had an apochromatic object-glass.
I note that it was twenty years ago to the day that I took George to the 30th anniversary meeting of The Astronomer magazine, and, looking in my wardrobe find that I still own the same jacket as I wore then!
George and I immediately got on very well, both being in the teaching profession. He was of that generation that used surnames, so on the phone I was always greeted with the words ‘Alcock ’ere’! It was immediately apparent that George was a fine artist, for he began his talk at the school by drawing a steam engine on the blackboard (in the days when blackboards were black not white), and showing how sometimes it could eject red-hot coals, which – he told the boys present – should not be mistaken for meteors against a dark sky. A railway line ran close to where George first lived.
When writing my BAA Memoir about the Martian dust storms I had occasion to question George about some of his Mars drawings, for he never had time to send all his work to the BAA. He had one particular phrase, which more than one of his correspondents (and certainly Guy Hurst) will remember: ‘The BAA will never see those observations’. That did not mean that George deliberately hid his work from us; far from it, but he was a very busy man, and had little time to copy out pages of variable star magnitude estimates or many planetary drawings. … (continued)