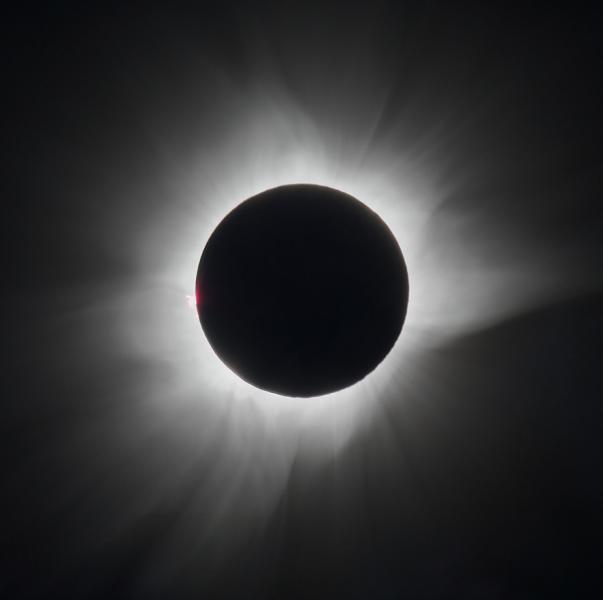 Where does Mata Hari come into this? The famous exotic dancer and courtesan, executed as a German spy in 1917, took her stage name from the Malay phrase for the Sun (literally ‘eye of the day’), and the present-day Indonesian for solar eclipse has the same root – ‘Gerhana Matahari’.
The total eclipse of 2016 March 09 crossed the Pacific Ocean, and so totality was visible from very few locations on land: a few uninhabited Pacific atolls, and a swathe of islands in the Indonesian archipelago – primarily Sumatara (Sumatra), Borneo, Sulawesi and the Malukus (Moluccas).
I joined the Astro-Trails tour to the Spice Islands of Ternate and Tidore. These beautiful volcanic islands, in the western Malukus, are the original source of the clove spice; abundant harvests led to the islands becoming two of the most prosperous sultanates in the so-called East Indies.
We arrived at Ternate the day before the eclipse. Weather forecasts for eclipse day were worrying – Indonesian TV predicted clouds right across the country. Jay Anderson, the leading eclipse forecaster, was more ambivalent, telling us that the Spice Islands were on the edge of a cloud system; but even he couldn’t predict clear skies with certainty.
Waking up at 4:30 on eclipse day didn’t improve our spirits – it was raining. (continued…)

[Corona imaged with a Canon EOS 5D by Philippe Lopez]